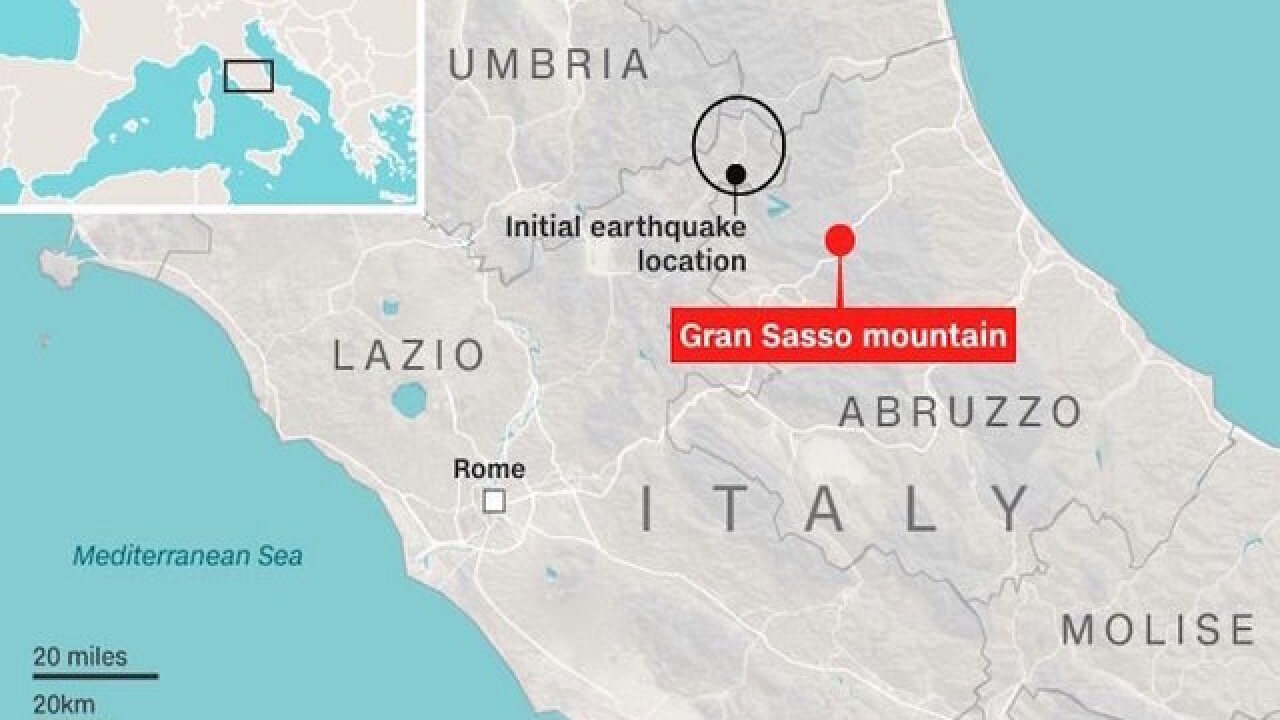 CNN
CNN
<p>At least one person has died and many others are feared dead after an avalanche buried a hotel in central Italy following a series of earthquakes.</p>

ROME (CNN) -- At least two people were killed and many others are feared dead after an avalanche buried a luxury hotel in central Italy following a series of earthquakes.

An estimated 30 people are believed to have been inside the Hotel Rigopiano spa resort when it was hit by an avalanche Wednesday night at the foot of the Gran Sasso mountain, Italy's Civil Protection Department said.

It based its estimate on guest registration and staff numbers, but said it was possible that some people had escaped before the avalanche hit.

Italian fire department spokesman Luca Cari, who is at the scene, told CNN that the hotel had been "completely slammed" in the avalanche and debris was scattered as far as 100 meters from the hotel structure, making the search area large.

The fire department said on Twitter at 4:30 p.m. that a second body had been pulled from the debris, 12 hours after rescuers reached the area.

"We are calling out but no one is answering," rescuers told Italian state media ANSA.

Firefighters told ANSA the hotel had been "swept away" and buried by tons of snow, and that there was mostly uprooted trees and debris at the hotel site.

An elderly farmer also died in the same region of Abruzzo on Wednesday when his barn collapsed.

Video recorded by rescue teams shows what appears to be a smashed wall or window in the four-star hotel's lobby, with tree branches, snow and other debris piled on the floor.

Curcio explained that dealing with earthquakes and an avalanche at the same time caused difficulties in the rescue operation and even confusion among the affected population over how to respond.

"For the weather, you tell people to stay in their homes, while for the earthquake, citizens must be brought outside. Putting together these two elements is extremely complicated," he said.

Rescuers battled blizzards and strong winds to reach the site, some having to ski for several kilometers in the darkness to get there because some roads were impassable.

When they arrived, they found only the building's top story and roof visible above the snow, Italy's Mountain Rescue Service said on social media. It also posted a picture of rescuers digging for survivors.

Italy's fire department posted a photo on Twitter showing rescuers being dropped into the area by helicopter.

Italian Prime Minister Paolo Gentiloni said the amount of this week's snowfall in the country is something that hasn't been seen in decades.

CNN Meteorologist Brandon Miller said heavy snowfall in the last 24 hours measured 70 centimeters (nearly 28 inches) and over the past week, snow accumulations were more than 3 meters (about 10 feet) in the mountains. The risk of more avalanches is high, he said.

"The recent, historic snowfalls have created a very loose and unstable snowpack, which is why the avalanche danger is high on all steep slopes."

Rescuers were still trying to get to other areas isolated by the avalanche, Gentiloni said, and authorities were hoping to bring power back to as many as 90,000 people who were left in darkness overnight from the extreme weather.

Central Italy was rocked by more than 10 earthquakes Wednesday, four of them above magnitude 5, according to the US Geological Survey.

An initial 5.3-magnitude quake hit in the morning near the town of of Amatrice, which was devastated by powerful earthquakes in August. The tremors continued for more than six hours, with one as strong as magnitude 5.7.

While the epicenter was 90 kilometers northeast of Rome, the quake was felt in the capital, sending people running from buildings in a panic.

All the aftershocks hit around Amatrice, in the mountainous regions of Marche, Lazio and Abruzzo.

Nearly 300 people died in the August earthquakes in central Italy around Amatrice, leaving its town center -- once popular with tourists -- reduced to rubble.