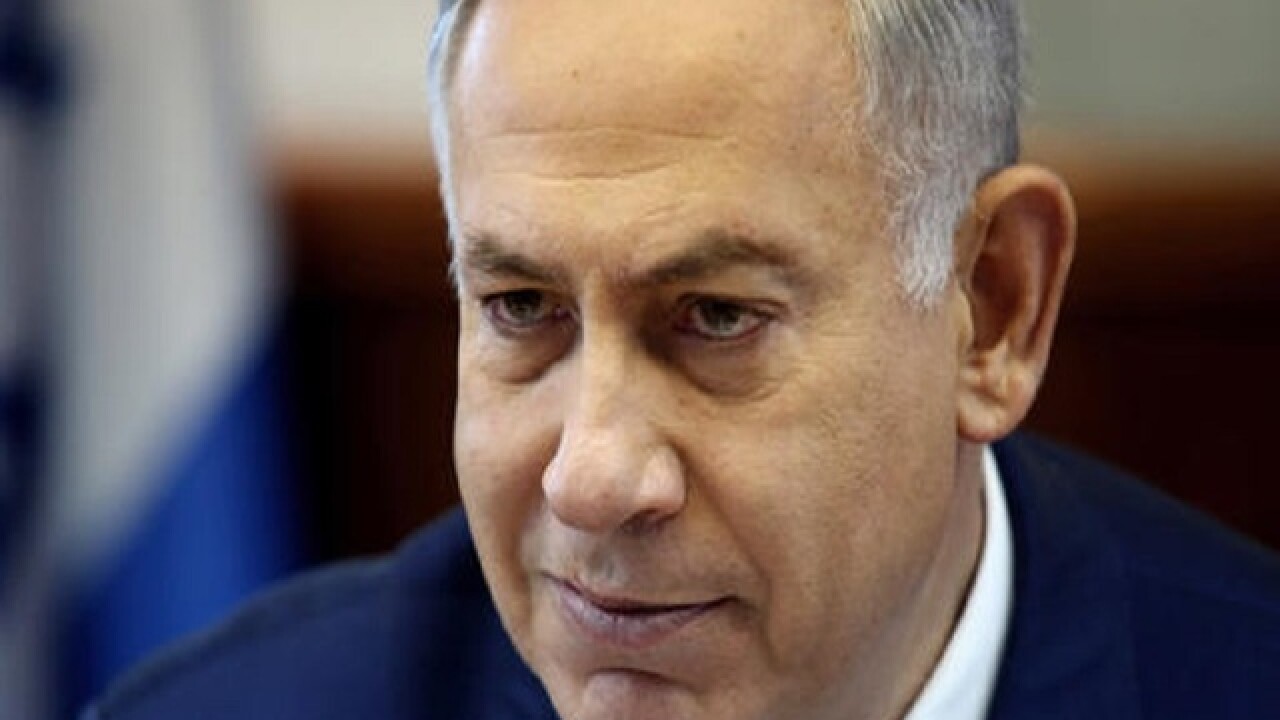 Gali Tibbon
<p>FILE - In this Sunday, May 15, 2016, file photo, Israeli Prime Minister Benjamin Netanyahu heads the weekly cabinet meeting at the Prime Minister's office in Jerusalem. Egyptian President Abdel-Fattah el-Sissi said Tuesday that Egypt�s relations with Israel, rooted in a landmark 1979 peace treaty, can only be �warmer� if his country�s former enemy reached a settlement with the Palestinians and pledged to �make every effort� toward a solution. (Gali Tibbon/Pool Photo via AP, File)</p>

JERUSALEM (AP) — Israel's defense minister announced his resignation on Friday, citing a lack of "trust" in Prime Minister Benjamin Netanyahu after reports in recent days that he is soon to be replaced.
In a Facebook post, Moshe Yaalon said that he told Netanyahu that "following his conduct in recent developments and in light of the lack of trust in him, I am resigning from the government and the Knesset (Israel's parliament) and taking a time out from political life."
Netanyahu and Yaalon have clashed in recent days over the role of the military in public discourse, with the prime minister arguing that military officials should not discuss policy matters publicly.
Tensions between Yaalon and Netanyahu escalated in March, when military leaders criticized a soldier who was caught on video fatally shooting an already-wounded Palestinian attacker. The solider is now on trial for manslaughter. While Yaalon has backed the military, hard-liners have backed the soldier.
Reports over the past few days indicate that Netanyahu intends to appoint former foreign minister Avigdor Lieberman to the post. Lieberman, 57, is one of the country's most polarizing politicians. Over three decades, he has at times been Netanyahu's closest ally and at other times a fierce rival.
Netanyahu this week invited Lieberman's ultranationalist Yisrael Beteinu party to shore up his shaky parliamentary coalition and negotiation teams have been meeting to hammer out the details of their alliance.
Yaalon's resignation solidifies the takeover of hardliners in the party.
Cabinet Minister Gila Gamliel said that Yaalon's leaving is a "tremendous loss" for the ruling Likud party. She told Israel Radio she believes it was a "mistake" not to offer Yaalon another position and keep him in the coalition.
Many Israelis have questioned the wisdom of appointing Lieberman to the sensitive post of defense minister over Yaalon, a former army chief of staff who is generally respected for his knowledge of military affairs. Polls commissioned by Israeli TV stations broadcast Thursday showed that a majority of Israelis prefer Yaalon as defense minister over Lieberman.
Lieberman has held a number of Cabinet posts in the past, including stints as foreign minister.
His hard-line stance has made him an influential voice at home but has at times alienated Israel's allies overseas. He has questioned the loyalty of Israel's Arab minority and confronted Israel's foreign critics. He has expressed skepticism over pursuing peace with the Palestinians, and is now pushing a proposal to impose the death penalty against Arabs convicted of acts of terrorism.
With Israeli-Palestinian peace efforts in a deep freeze, Lieberman's addition to the government could push the prospect of reviving talks even further into the distance.
Lieberman rose to prominence as the engineer of Netanyahu's successful run for prime minister in 1996, and he later became Netanyahu's chief of staff.
His tough stances have long stoked controversy. As a Cabinet minister last decade, he called for the bombing of Palestinian gas stations, banks and commercial centers.
He also led a recent parliamentary drive to exclude Arab parties from running for election — a move that was overturned by Israel's Supreme Court.
Yet despite his rhetoric, Lieberman has shown signs of pragmatism. He served as a Cabinet minister in two centrist Israeli governments, though he was fired for opposing Israel's 2005 withdrawal from Gaza and resigned to protest peace talks that begun at the 2007 conference in Annapolis. His plan for redrawing Israel's borders would also mean dismantling some Jewish settlements.
Associated Press 2016