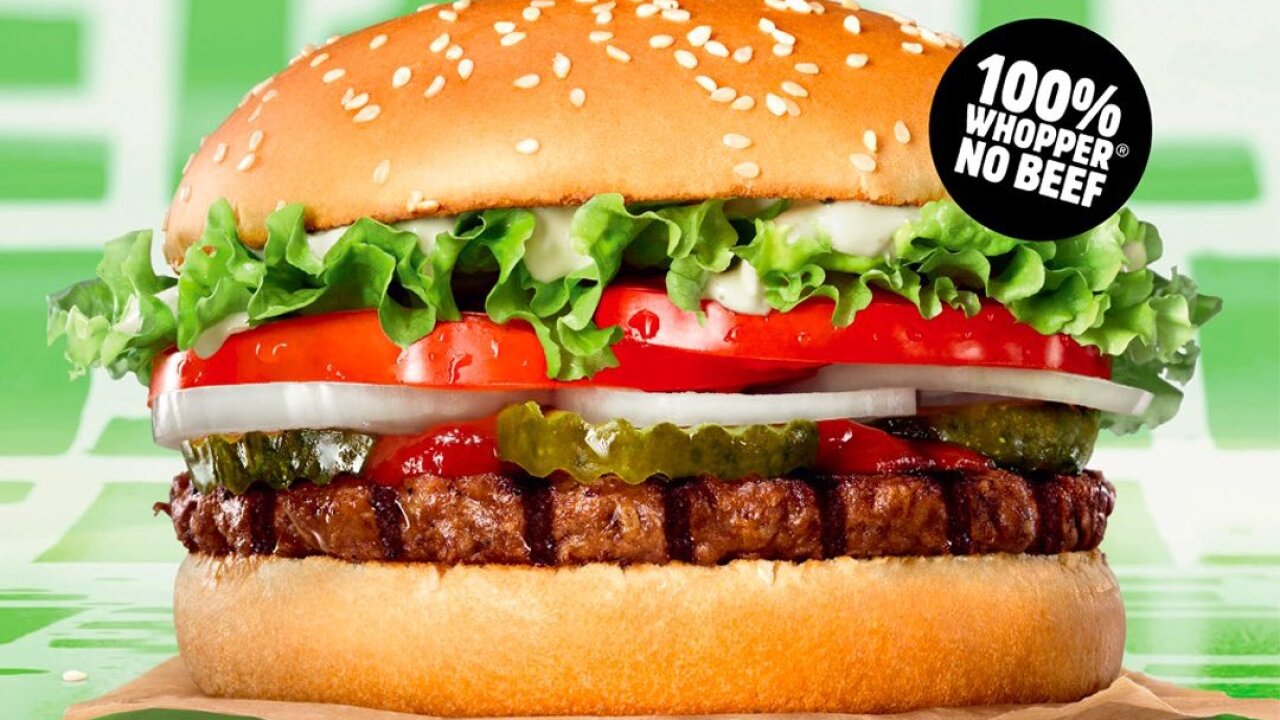 Burger King is launching its plant-based Rebel Whooper in the U.K. But some are sneering at the new product after a disclaimer on the fast food restaurant's website says it may not actually be suitable for vegetarians.

While the Rebel Whopper is 100% plant-based like its American cousin, the Impossible Whopper, the Burger King UK website warns consumers that the cooking method could prevent some vegetarians from eating it.

"The Rebel Whopper is plant-based; however, it is cooked on the same broiler as our original WHOPPER to deliver the same unique flame-grilled taste," the website says. "Due to shared cooking equipment it may not be suitable for vegetarians."

People took to social media to voice their concerns. While some were OK with the disclaimer, others were disappointed.

Hey - whilst the patty itself is completely plant-based, the Rebel Whopper is cooked on the same broiler as our beef to provide our signature flame-grilled taste, so we do not label the burger as vegan or vegetarian.

My body is so ready for the Rebel Whopper. It doesn’t hugely bother me that it’s cooked on same grill as meat but I’m laid back, shame so many other people won’t be able to eat it. Sort it out @BurgerKingUK

I totally get why vegans won't be eating the Burger King Rebel Whopper in the UK, but to see so many asking "what's the point?" seems utterly bizarre. What, you'd prefer the largest burger chains in the world didn't introduce plant-based options? This progress is HUGE!

The Rebel Whopper – minus the mayo – is produced without harming any sentient being, it's a BIG WIN for animals. pic.twitter.com/FmZPTCnzKv

Weak effort from @BurgerKing re: rebel whopper, wtf is the point bringing out a veg burger that's cooked with meat?

I'm not precious about cross contamination but I draw the line at my food literally being cooked in meat juices.

Get a new grill & change the mayo you cowards.

Burger King's new plant-based burger is not suitable for vegans [and vegetarians!]

Fast-food chain’s latest offering is cooked on a meat grill.

@BurgerKing why is your Rebel Whopper meat free but not vegetarian or vegan? Struggling to see the point of it

This isn't the first time the issue has come up for the food chain's plant-based burger. Back in November, vegan Phillip Williams filed a class action lawsuit in the Southern District of Florida against Burger King because they cook their meatless burgers alongside their regular burgers. The lawsuit alleges the company is being misleading by advertising their Impossible Whopper as a meat-free option.

So is Burger King's plant-based Whopper actually vegetarian and vegan friendly? Yes and no.

While the burger patty is 100% meat-free, both the UK and US version come topped with mayo, which contains eggs, making it unsuitable for vegans.

However, while the Rebel Whopper comes with the disclaimer that the burgers are cooked on the same broiler as meat items, the Impossible Whopper can actually be cooked differently to avoid meat contamination, according to the Burger King website.

"For guests looking for a meat-free option, a non-broiler method of preparation is available upon request," the website says.