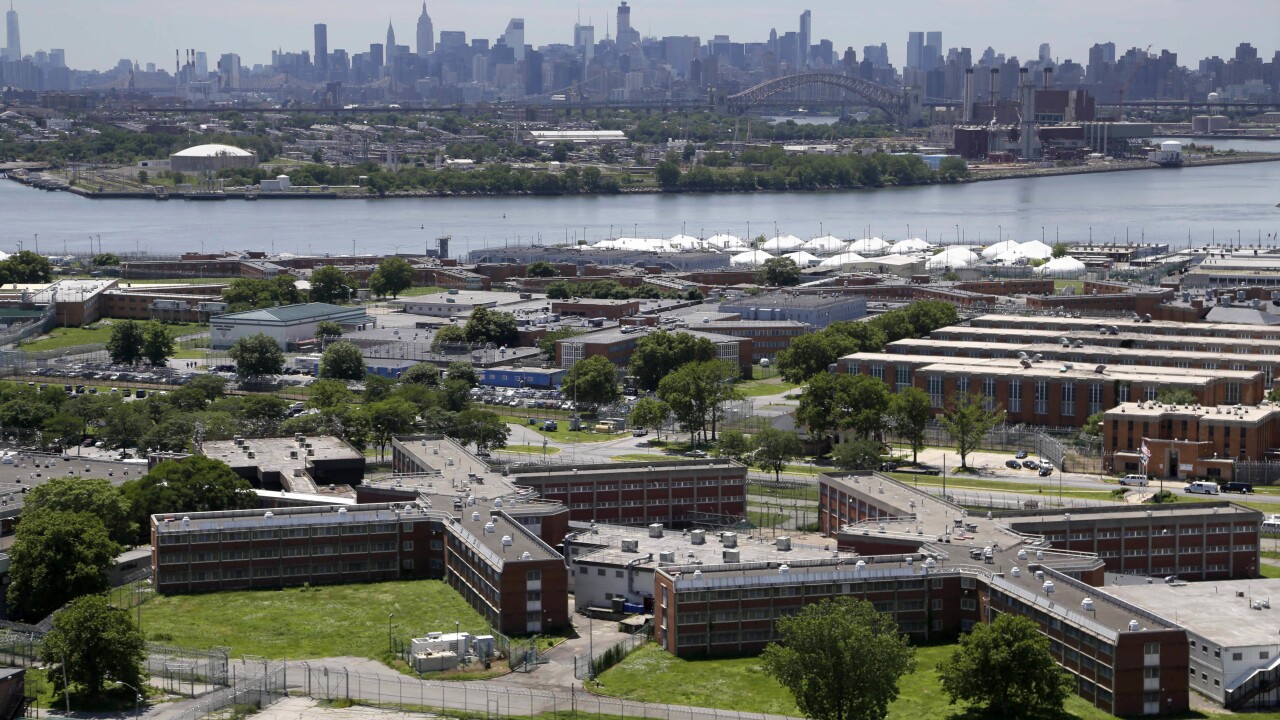 Seth Wenig/AP
FILE - This June 20, 2014 file photo shows the Rikers Island jail complex in New York with the Manhattan skyline in the background. City officials released details about their plan to close Rikers Island and replace it with smaller neighborhood jails, some of which would also include community spaces, ground-floor retail and affordable housing. (AP Photo/Seth Wenig, File)

Two men allegedly involved in a robbery where a New York City police detective was killed in friendly fire were among the violent offenders on the list of inmates slated to be released from the infamous Rikers Island jail complex due to the coronavirus pandemic, until prosecutors intervened, multiple sources told ABC News.

Christopher Ransom, 28, and Jagger Freeman, 26, were charged with armed robbery in connection with the February 2019 shooting death of NYPD Detective Brian Simonsen. They appeared on a list of names obtained by ABC News that also included Viktoriya Nasyrova, 45, who was accused of trying to kill a woman in 2016 with a poisoned cheesecake.

The only thing that kept alleged violent offenders from being released was the intervention of the city’s five district attorneys, who said in a joint letter issued Monday that “we want to make clear that the categories of those proposed for release have, in some instances, included individuals who pose a high risk to public safety.”

As the coronavirus, formally known as COVID-19, began its stranglehold on New York State, it crept into Rikers Island, a sweeping complex near LaGuardia Airport that is one of the largest jail compounds in the world. The virus infected the first correction staff member on March 15 and an inmate three days later.

The arrival of the virus prompted city officials, defense attorneys and advocates to call for the of release inmates, since jails are notorious breeding grounds for germs.

New York City's Board of Correction (NYCBOC), which oversees the Department of Correction (DOC), instructed the city and criminal justice agencies to work together to "immediately remove" inmates at higher risk from COVID-19 and to rapidly decrease the jail population.

"The City’s jails have particular challenges to preventing disease transmission on a normal day and even more so during a public health crisis," according to a March 17 statement issued by the NYCBOC.

Rikers Island at the time of the first diagnosis housed more than 5,000 inmates in separate facilities on an island along the East River between the Bronx and Queens.

'High risk to public safety'In a joint letter sent to the New York City's Mayor Bill de Blasio and the DOC's Commissioner Cynthia Brann, the city's five district attorneys and its special narcotics prosecutor said that they supported reducing the number of those incarcerated -- but not haphazardly and without a plan.

"We fully appreciate the unique risks that the COVID-19 virus poses in our jails, and we agree that the number of those incarcerated must decrease to limit the spread of the virus on Rikers Island and in other facilities," the district attorneys wrote. "At the same time, we want to make clear that the categories of those proposed for release have, in some instances, included individuals who pose a high risk to public safety. In such instances, we have communicated our concerns, but these concerns have not always been heeded."

Defense attorneys and the Mayor's Office of Criminal Justice (MOCJ) collected hundreds of names to propose to the district attorney offices in the jurisdiction of their clients' pending or closed cases.

MOCJ created a list of 84 inmates with underlying health conditions that would put them at higher risk if they came into contact with the coronavirus, according to two separate sources.

Representatives from each prosecutors' office had the option of agreeing or objecting to the inmates' release.

But prosecutors claimed in the letter sent on Monday that their "concerns have not always been heeded."

"As an example, when we learned last week that the Commissioner of Corrections was about to use her authority to order an across-the-board release of hundreds of inmates serving city sentences, we were assured that the release would not include those serving time for domestic violence or sex offenses, given the risks to victims. Unfortunately, we later learned that such individuals were indeed included in the ranks of those to be released," the letter read.

In other situations when an objection was made, MOCJ or defense attorneys would file a writ of habeas corpus -- an order to physically bring the client to court to argue if their imprisonment is lawful -- and argue for the client's release before a judge, another source said.

A Manhattan supreme court judge released accused murderer Pedro Vinent-Barcia from Rikers Island after Legal Aid Society lawyers successfully argued on Thursday that because of the 63-year-old's cardiovascular disease, he is at high risk if exposed to COVID-19, The New York Post first reported. The public defender organization was also able to argue for the release of 15 others, over prosecutor's objections, according to the Post.

The Legal Aid Society declined a request to comment for this story.