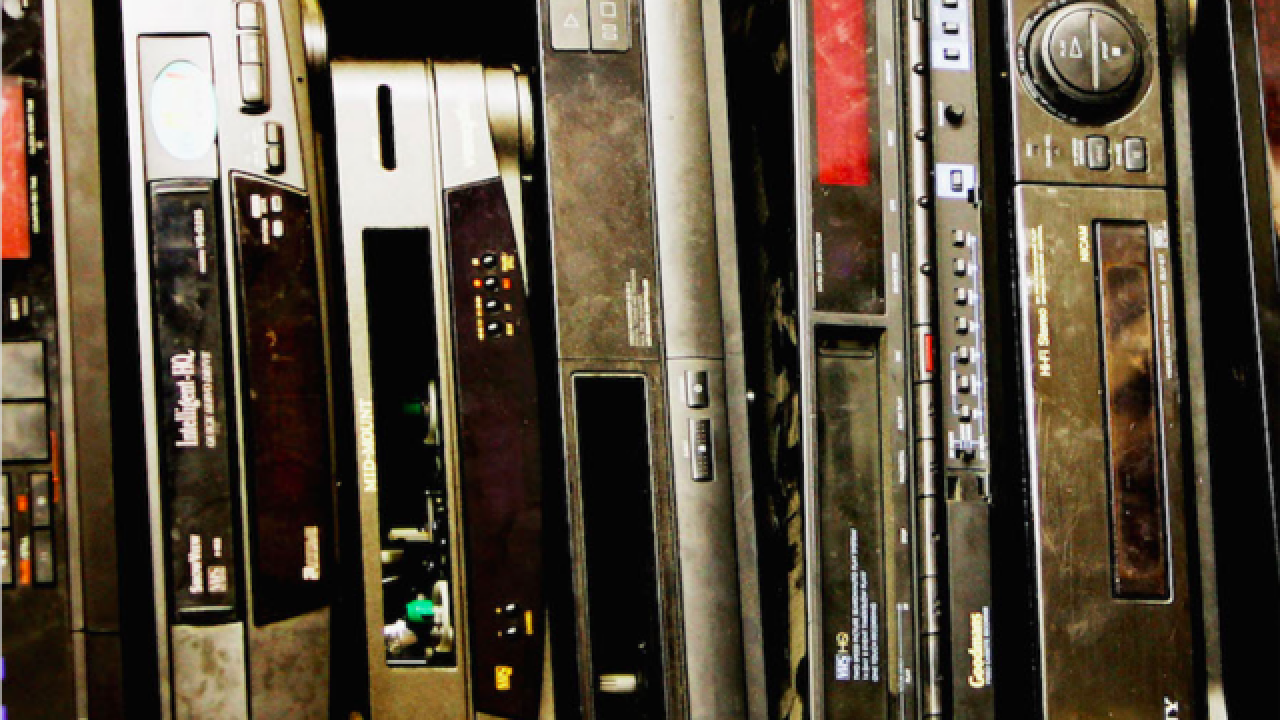 Innovation made significant progress in 2016. We saw an Amazon drone make its first commercial delivery in the U.K. and a fleet of self-driving Ubers hit the roads in Pittsburgh and San Francisco.

But the year wasn't so good for all tech products.

Let's recall the rise and fall of hoverboards and the ongoing saga of exploding Samsung Galaxy Note 7 smartphones. Other products went more quietly into the night: The last ever VCR was manufactured in July.

Here's a closer look at the tech products that hit the bucket in 2016.

iPhone headphone jack
Apple killed off the jack in September in favor of wireless headphones. The move, which upset some of its loyal users, forced new iPhone 7 users to either use a dongle or invest in wireless headsets.

The company also encouraged users to buy its wire-free (and futuristic-looking) set of earbuds,, AirPods ($160)

The concept of wireless headsets might take time for a mass audience to accept, but it's a part of Apple's big effort to propel the audio market forward. In a few years, we'll likely look back on how weird it was that we once wore wires dangling from our ears.

Samsung Galaxy Note 7
Where do we even begin? Samsung faced a slew of challenges in 2016 but nothing hurt more than the nightmare that was the Galaxy Note 7 smartphone.

In October, Samsung halted all production of the device following complaints that it burst into flames. This came after a badly mismanaged recall of 2.5 million Note 7s shortly after it launched.

Now, you can't even bring one on a plane without being it taken away.

Analysts believe the Note 7 debacle will put a $9.5 billion dent in sales and eliminate $5 billion in profits.

Samsung also recalled 3 million of its washing machines this year due to an explosion risk.

At its peak, the company sold 15 million VCRs in a year, but those numbers significantly dropped as DVDs, Blu-ray discs and, ultimately, streaming services hit the mainstream. Even so, Funai Electric still managed to sell 750,000 VCRs just last year.

Considering the first VCRs were introduced in the 1960s, 50 years of production is still a solid run for any tech device.

Hoverboards
Hoverboards were the holiday gift of 2015, but this year wasn't quite as good to the self-balancing scooters.

After reports of burns caused by exploding devices, the U.S. Consumer Product Safety Commission deemed hoverboards unsafe. Retailers pulled them from stores, transportation agencies banned them from trains and buses, and, ultimately, more than 500,000 hoverboards were recalled.

The devices' lithium-ion battery packs -- the same battery found in Samsung's Galaxy Note 7 smartphones -- were blamed for the incidents.

Pebble
Pebble, once the darling of the smartwatch world, recently sold off its software division to fitness tracking company Fitbit. The news angered existing Pebble users -- without software updates, their devices would become obsolete.

The deal, which cost $40 million, didn't include Pebble's hardware, but it appears the company won't be making more wearables. Reports indicate Pebble is pulling production on its Pebble Time 2 watch, which recently wrapped up a Kickstarter campaign. Early backers will receive refunds in the near future.

Pebble was the first company to make a splash with smartwatches, long before the Apple Watch and Samsung Gear hit the market.

Fitbit will likely use Pebble's software assets to move beyond fitness tracking and into the smartwatch space.

The tech giant acquired the popular calendar app, known for its social features and sleep design, in October 2015. But less than a year later, Microsoft (MSFT, Tech30) shuttered Sunrise and blended its features into Outlook, its email service.

The new integration brings map integration and makes it easier to set up meetings and Skype calls directly within Outlook.

But the app failed to get a loyal audience.

Paper was best known for its Instant Articles feature, which allowed users to browse and download articles from popular media outlets directly to their phones. It was also a convenient place to check Facebook messages and your timeline without switching apps.

But due to low user numbers, Facebook mostly used it as a testing ground to quietly roll out new features.

The social network shuttered the service on July 29.

It was a favorite among among graphic designers, gamers and anyone who needed to connect a Mac computer to a larger display. But considering it hadn't received an update since 2011, the news wasn't much of a shock.

Apple did, however, partner with LG to roll out 4K and 5K displays -- a pricier but better quality alternative.

Google Picasa
In March, Google pulled the plug on its photo-sharing and storing service Picasa.

Picasa attracted a loyal fan base over the years, allowing users to edit and organize digital photos long before the introduction of smartphone cameras.

Users weren't happy about the service's demise, but Google made the transition as easy as possible; existing photos and albums are still accessible after logging into Google Photos.

The parent company now blends the two brands together under a "Moto by Lenovo" moniker.

Motorola, the company behind the first walkie-talkie and consumer cell phone, has had a rollercoaster-like few years. It's been bought and sold twice since 2012. In the first deal, Google acquired Motorola for $12.5 billion, which kicked off the search giant's step into the hardware business.

But sales of the Moto X smartphone were sluggish, and Google eventually sold the company to Lenovo for $2.9 billion.

Google's Project Ara
Although Google's modular Ara phone was expected to ship as early as the fall, the company is no longer bringing it to market.

Google's experimental ATAP team spent more than three years developing the innovative concept that would allow people to design their own smartphones.

By using small bricks that look like LEGOs, pieces could be swapped, removed or attached based on your preferences.

But Project Ara, which underwent testing in Puerto Rico, was reportedly too costly and ran into a series of technical issues that kept it from hitting the mass market.

BlackBerry phones
BlackBerry, known for its cellphones with physical keyboards, is no longer making its own devices.

The company announced in September that it will lean instead on partners to manufacture the phones, which will still resemble BlackBerry devices. Its main focus will be on developing software -- an effort BlackBerry introduced several years ago amid slow phone sales.

Before the emergence of the iPhone, BlackBerry devices were so loved by their obsessed user base that they were nicknamed Crackberries. The phones were used by everyone from Kim Kardashian West to President Obama.

Vine
Twitter announced in October it was shutting down its beloved short-form video app, Vine -- a move that upset its most loyal fans. But recently, the company announced plans to bring it back from the dead. Sort of.

The parent company is rebranding the app as Vine Camera, allowing users to take photos and short clips that can be saved to a camera roll or shared on Twitter. Features such as built-in chat, likes and comments won't be included in the new version of the app.

Vine was acquired by Twitter in 2012 for $30 million. Although capabilities were limited, it played an integral role in capturing movements like Black Lives Matter and gave aspiring artists such as Shawn Mendes -- now a bestselling pop artist — a place to promote their brand.

Eventually, with the growth of livestreaming apps and video sharing tools, Vine lost its novelty.