Unapologetic Trump digs in on immigration despite outrage 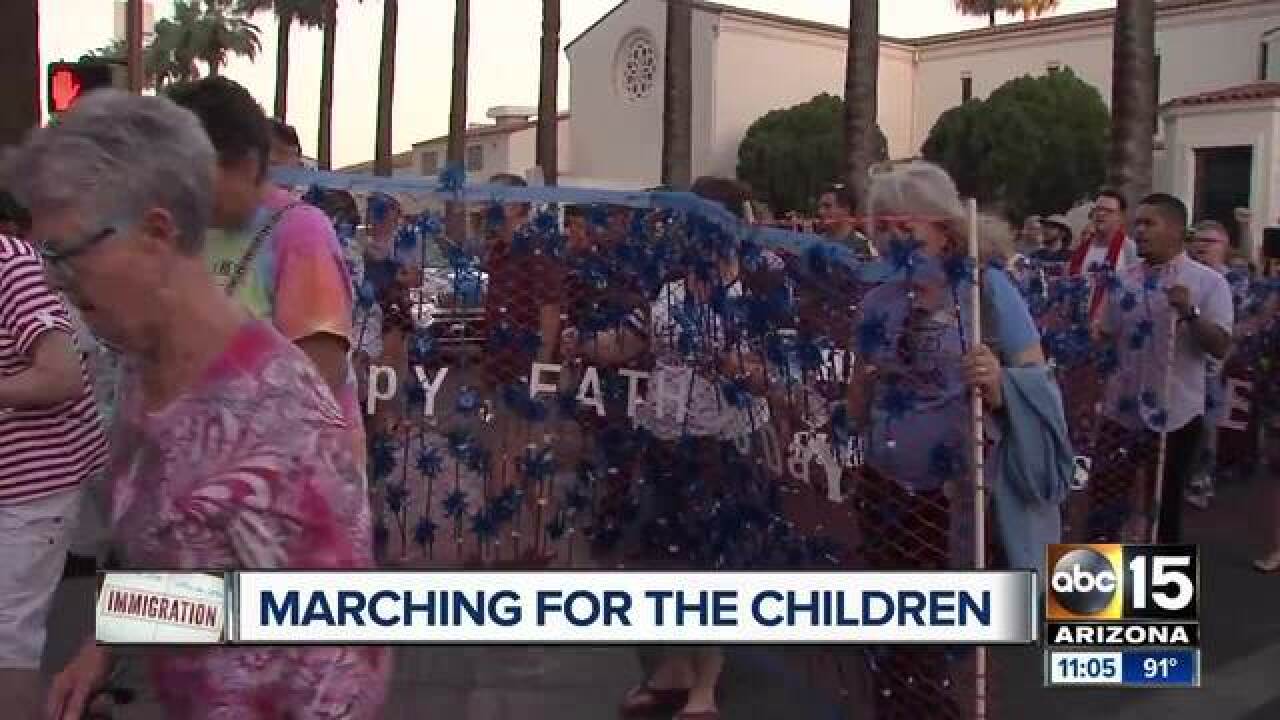 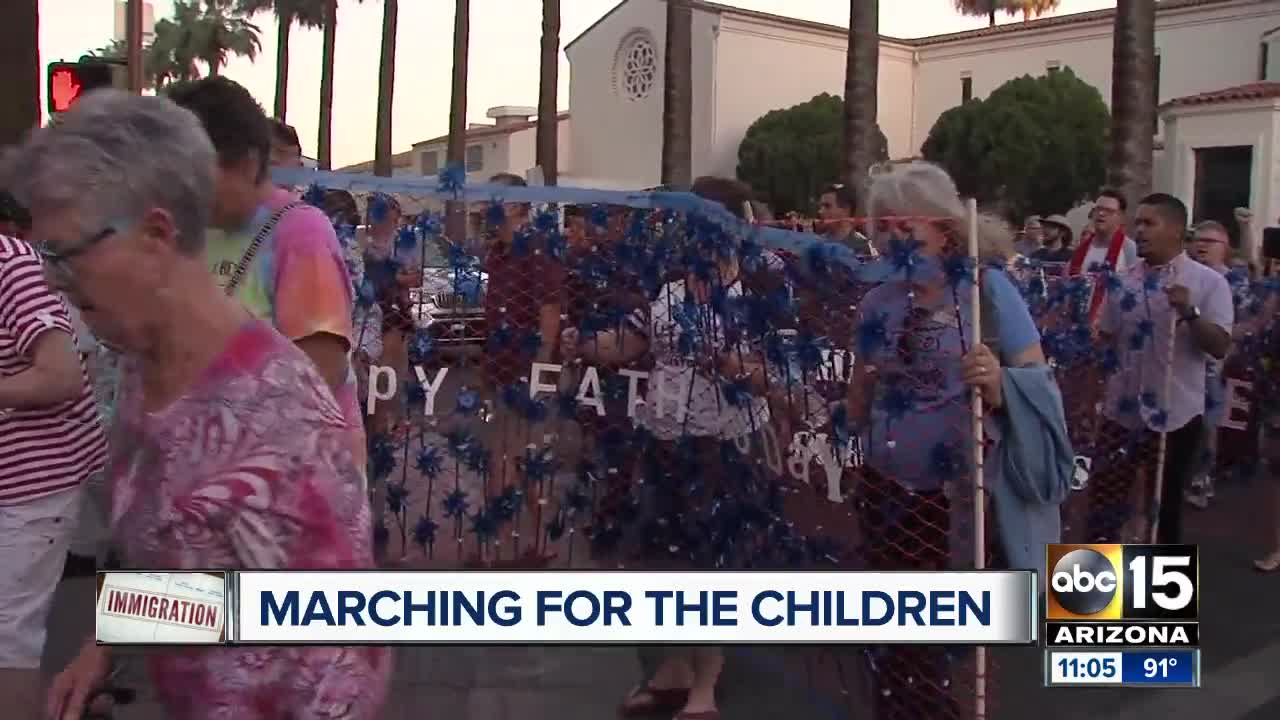 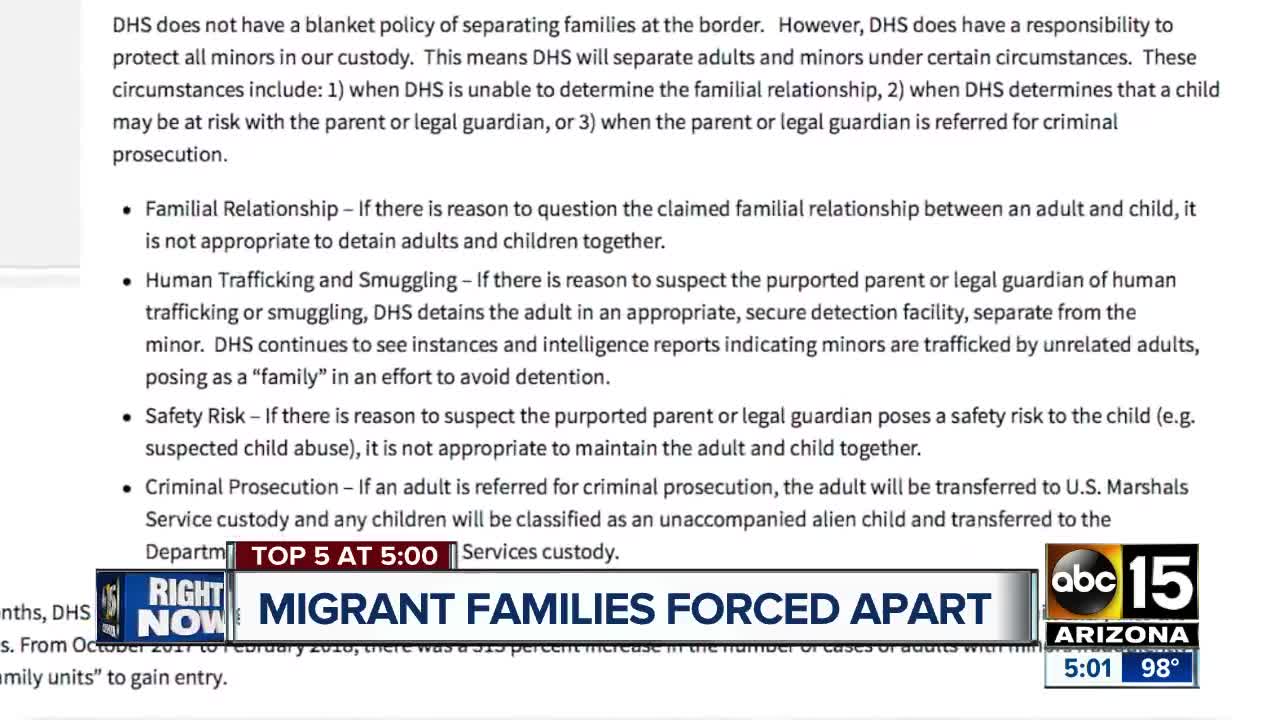 An unapologetic President Donald Trump defended his administration's border-protection policies Monday in the face of rising national outrage over the forced separation of migrant children from their parents. Calling for tough action against illegal immigration, Trump declared the U.S. "will not be a migrant camp" on his watch.

Images of children held in fenced cages fueled a growing chorus of condemnation from both political parties, four former first ladies and national evangelical leaders. The children are being held separately from parents who are being prosecuted under the administration's "zero-tolerance" policy for illegal border crossings.

Puente Arizona held a press conference in response to families being separated at the border.

"I say it's very strongly the Democrats' fault," Trump said Monday as his administration rejected criticism that the policy has resulted in inhuman and immoral conditions.

Trump pointed to more lenient policies under past administrations that had not charged all migrants who had crossed illegally.

RELATED: Children heard crying for parents after being separated near border

"We will not apologize for the job we do or for the job law enforcement does, for doing the job that the American people expect us to do," Homeland Security Secretary Kirstjen Nielsen said in an appearance before the National Sheriffs' Association in New Orleans. "Illegal actions have and must have consequences. No more free passes, no more get out of jail free cards."

Nearly 2,000 children were separated from their families over a six-week period in April and May after Attorney General Jeff Sessions announced the new "zero-tolerance" policy that refers all cases of illegal entry for criminal prosecution. Prior procedure had limited prosecution for many family entrants, in part because regulations prohibit detaining children with their parents since the children are not charged with a crime and the parents are.

The policy change was meant to deter unlawful crossings -- and Sessions issued a warning last month to those entering the U.S. illegally that their children "inevitably for a period of time might be in different conditions."

The current holding areas have drawn widespread attention after journalists gained access to one site Sunday. At a McAllen, Texas, detention center hundreds of immigrant children wait in a series of cages created by metal fencing. One cage had 20 children inside. Scattered about are bottles of water, bags of chips and large foil sheets intended to serve as blankets.

Administration officials said they do not like the family separations either -- calling it the result of legal loopholes -- but insist migrants who arrive illegally simply won't be released or loosely kept track of.
"The United States will not be a migrant camp and it will not be a refugee holding facility," Trump declared. "Not on my watch."

Sessions, on Monday, echoed the administration's defense of the zero-tolerance policy, and called on Congress to act.

"We do not want to separate parents from their children," he said. "If we build the wall, if we pass legislation to end the lawlessness, we won't face these terrible choices."

Mindful of the national outcry, lawmakers in both parties rushed Monday to devise a targeted legislative fix.

GOP senators, including Lindsey Graham of South Carolina, Jeff Flake of Arizona and Susan Collins of Maine, said they were considering legislation that would keep migrant families together; provide additional judges so detained families would face shorter waiting periods; and provide facilities for the families to stay.

Graham said he talked Mondayto about 40 senators, including Democrats, but not Senate Majority Leader Mitch McConnell. "It's a concept it seems everybody is jumping on board," he said.

California Sen. Dianne Feinstein said she had the backing of the Democratic caucus for a bill would that prohibit the separation of migrant children from their parents, with exceptions for findings of child abuse or trafficking.

But the White House signaled it would oppose any narrow fix aimed solely at addressing the plight of children separated from their parents under the immigration crackdown. Press secretary Sarah Sanders said Trump's priorities, like funding a border wall and tightening immigration laws, must also be fulfilled as part of any legislation.

"We want to fix the whole thing," she said. "We don't want to tinker with just part of it."

The national debate over the family separation policy comes as Republican lawmakers are growing ever more concerned about negative effects on their re-election campaigns this fall. Trump is to travel to Capitol Hill Tuesday for a strategy session on upcoming immigration legislation.

Underscoring the sensitivity of the issue, language curbing the taking of immigrant children from parents held in custody will be added to the House's conservative immigration bill, a House GOP aide said Monday, A similar provision is already in a compromise GOP immigration measure between party conservatives and moderates, with the House expected to vote on both late this week.

The administration is hoping to force Democrats to vote for the bills or bear some of the political cost in November's midterm elections.

White House officials have privately embraced the border policy as a negotiating tactic to win votes for legislation to fulfill the president's pledge to build a border wall and to tighten the nation's immigration laws.
Trump's commitment to the current policy showed no sign of faltering as voices of outrage and condemnation grew louder and more diverse.

In Massachusetts, Republican Gov. Charlie Baker reversed a decision to send a state National Guard helicopter to the southern border, citing what he called the administration's "cruel and inhumane" policy of separating children from their parents.

The Rev. Franklin Graham, a longtime Trump ally, called the policy "disgraceful." Several religious groups, including some conservative ones, have pushed to stop the practice of separating immigrant children from their parents. The Mormon church said it was "deeply troubled" by the separation of families and urged national leaders to find compassionate solutions.

Former first lady Laura Bush called the policy "cruel" and "immoral," and said it was "eerily reminiscent" of the U.S. internment of Americans of Japanese descent during World War II.

On Capitol Hill, Republicans joined Democrats in calling for an end to the separations.

Michigan Republican Rep. Fred Upton called for an immediate end to this "ugly and inhumane practice," adding, "It's never acceptable to use kids as bargaining chips in political process." Kansas GOP Sen. Pat Roberts said he is "against using parental separation as a deterrent to illegal immigration."

And GOP Rep. Mike Coffman warned, "History won't remember well those who support the continuation of this policy."