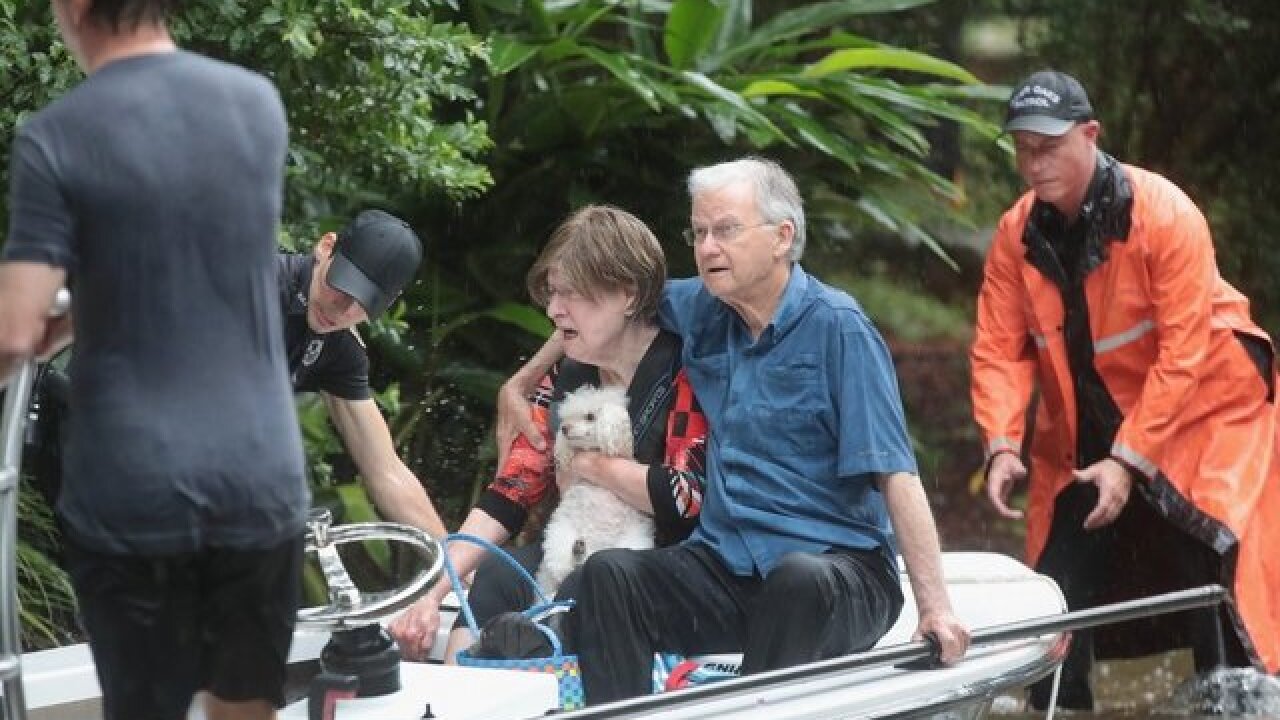 As people waded in chest-high floodwaters in the United States' fourth-largest city, Houston's mayor announced Sunday that the main convention center would be opening as a shelter, evoking memories of Hurricane Katrina, when breached levees in New Orleans stranded tens of thousands of people in squalid conditions at the football stadium and convention center.

Elected officials have vowed to heed the lessons from Katrina in 2005, when about 30,000 evacuees spent days packed inside the sweltering Superdome without electricity or running water. The stadium, whose roof peeled off in the howling wind, allowing rain to pour in, became known as a squalid shelter of last resort.

The fiasco exposed how the city and country did not prepare adequately for the storm.

Sen. Chuck Grassley of Iowa told President Donald Trump on Twitter to "keep on top of hurricane Harvey" and not repeat the mistakes that President George W. Bush made with Katrina. Bush was heavily criticized for a slow federal government response to the storm, which left more than 1,800 people dead and caused $151 billion dollars in damage.

"Got your message loud and clear. We have fantastic people on the ground, got there long before (hash)Harvey. So far, so good!" Trump tweeted back. Later, the White House announced Trump would go to Texas on Tuesday.

There is no doubt the challenge will be huge for Houston, a city of 2.3 million residents.

Forecasters said Sunday that the remnants of Hurricane Harvey would dump as much as 50 inches (127 centimeters) of rain in some spots, the highest ever recorded in Texas. "The breadth and intensity of this rainfall is beyond anything experienced before and is resulting in catastrophic flooding," the National Weather Service said in a statement.

In New Orleans, almost 80 percent of residents were evacuated days ahead of Katrina's arrival. In contrast, Houston's Mayor Sylvester Turner advised people to stay in their homes, saying it was not feasible to evacuate the entire city.

Rescue workers were so overwhelmed with calls for help Sunday that initially they were able to respond only to life-and-death situations.

Houston authorities urged people to escape to the roofs of their homes to avoid becoming trapped in attics, which caused more than a dozen deaths in Katrina's aftermath. Residents were asked to wave sheets or towels to draw attention to their location as floodwaters reached second-story levels -- echoing images from New Orleans.

The number of shelters in Houston was expected to dramatically increase. The George R. Brown Convention Center received hundreds Sunday as authorities scrambled to ready the building with 1.8 million (0.17 million sq. meters) of space.  Officials asked for help from restaurants to feed its growing population.

It and the city's Astrodome in 2005 received thousands of Katrina evacuees fleeing the horrific conditions of New Orleans' shelters in 2005.
Houston was applauded then for showing how shelters should be run.
But some people Sunday were questioning city officials' decisions so far in this storm.
Desiree Mallard arrived to the convention center after escaping her apartment complex by using an inflated air mattress to float her nearly 2-year-old son through floodwaters that came up to her chest.
A Coast Guard vessel picked them up.
Mallard wished she had left before Hurricane Harvey approached the Texas Gulf Coast, but she saw on the news to stay in place.
"And then when it got bad, they said it's too late to evacuate," she said.
Asked if this storm could become Houston's Hurricane Katrina, Texas Gov. Greg Abbott ducked the question.
"As far as the evacuations, now is not the time to second-guess the decisions that were made," Abbott told reporters in Austin. "What's important is that everybody work together to ensure that we are going to, first, save lives and, second, help people across the state rebuild. And because of the effort that we've been able to put together, I think and believe we will be very successful."