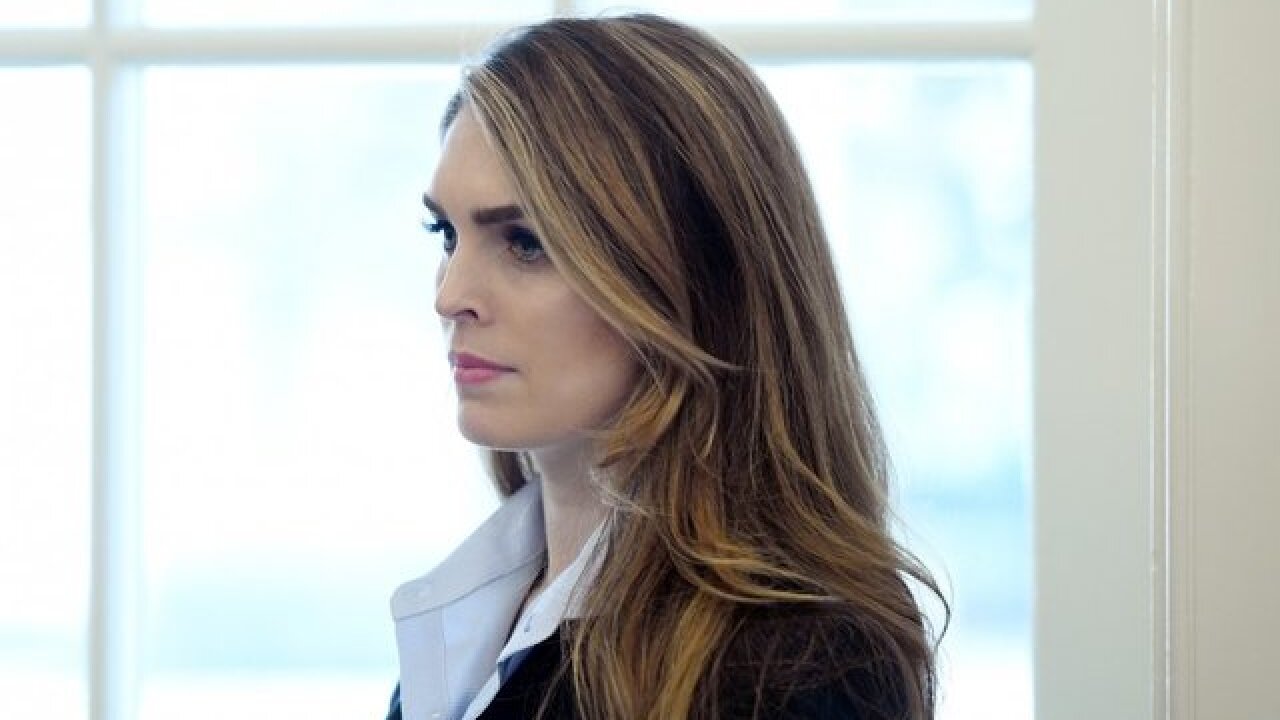 White House communications director Hope Hicks is not answering questions about her time in the White House during her closed-door House Intelligence Committee testimony Tuesday, but she has started to answer some questions about the presidential transition, according to lawmakers on the committee.

A source familiar with her testimony says the attorney for Hicks told the committee that she will not discuss matters after the campaign in accordance with the White House request. When asked about certain matters, her attorney says she will "take it under advisement" but not answer those questions, the source said.

When former White House chief strategist Steve Bannon appeared before the committee last month and didn't answer questions about similar time frame beyond the 2016 campaign, he was hit with a subpoena during the interview. Republicans said Bannon's claim that he could invoke executive privilege during the presidential transition did not have merit.

Hicks, however, did respond to some questions regarding the transition, according to Rep. Tom Rooney, a Florida Republican.

Rooney said her answers weren't prompted by a subpoena threat, but because she apparently had responded to similar questions during her previous interview before the Senate Intelligence Committee. The committee made the case they were entitled to the same answers as the Senate panel, and the White House apparently agreed.

"It had more to do with what she testified to the Senate, and what was fair to the House to ask the same questions," Rooney said.

It's unclear whether Hicks is answering all questions about the transition or just those that she previously answered in her Senate testimony.

Earlier on Tuesday, Democrats were pushing for the committee to subpoena Hicks for not responding to the panel's questions.

"I have less hope we'll get to all the answers," said Rep. Mike Quigley, an Illinois Democrat. "As with anyone who doesn't answer questions, they ought to be subpoenaed."

Rooney and other lawmakers said Hicks still was not answering questions about her time in the Trump White House.

"There are some questions that she's not going to answer. I think anything dealing with the administration, from the time of the inauguration," GOP Rep. Chris Stewart of Utah told reporters.

Rep. Mike Conaway, the Texas Republican leading the House Intelligence Committee's Russia investigation, told CNN ahead of the meeting that he expected Hicks to answer all of the committee's questions. He declined to comment Tuesday afternoon on Hicks' testimony or a possible subpoena, saying he would wait until the interview had concluded.

Bannon returned under subpoena earlier this month to the committee to continue he testimony, and he told the panel he had been instructed by the White House to invoke executive privilege on behalf of the President.

California Rep. Adam Schiff, the top Democrat on the House Intelligence Committee, has called for Bannon to be held in contempt of Congress for refusing to answer questions, as well as former Trump campaign manager Corey Lewandowski, who also limited the scope of questions he would answer. But Conaway said Tuesday that he still has to discuss the matter with House Speaker Paul Ryan before deciding how to proceed.

Quigley said Hicks had not asserted privilege Tuesday, but she was "following the orders of the White House not to answer certain questions."

Hicks did not answer reporter questions on her way into the interview Tuesday morning. She was initially scheduled to appear before the committee last month as part of the panel's investigation into Russian meddling into the US election, but her interview was delayed over questions about the scope of her testimony.

Hicks has already been interviewed by the Senate Intelligence Committee, a source familiar with the matter told CNN. Hicks also met last year with special counsel Robert Mueller as part of his investigation.

Hicks, a trusted Trump aide for years, was one of then-candidate Trump's first hires as he put together an improbable run for the White House. During the campaign, she was often by Trump's side and attended nearly every rally, while she was in frequent communication with other senior officials as they coordinated their tactics to win the White House.

The House panel plans to interview her about any knowledge she has of contacts that occurred between other Trump associates and Russians. And she is bound to be questioned about other controversies as well, namely the White House's involvement in crafting a misleading response last summer once a June 2016 meeting between Russians and Donald Trump Jr. was revealed in the press.

Hicks appears to have firsthand knowledge of a number of key events that have shaped the first year of the Trump White House, including being on Air Force One when the initial misleading statement about Trump Jr.'s meeting with Russians was crafted.