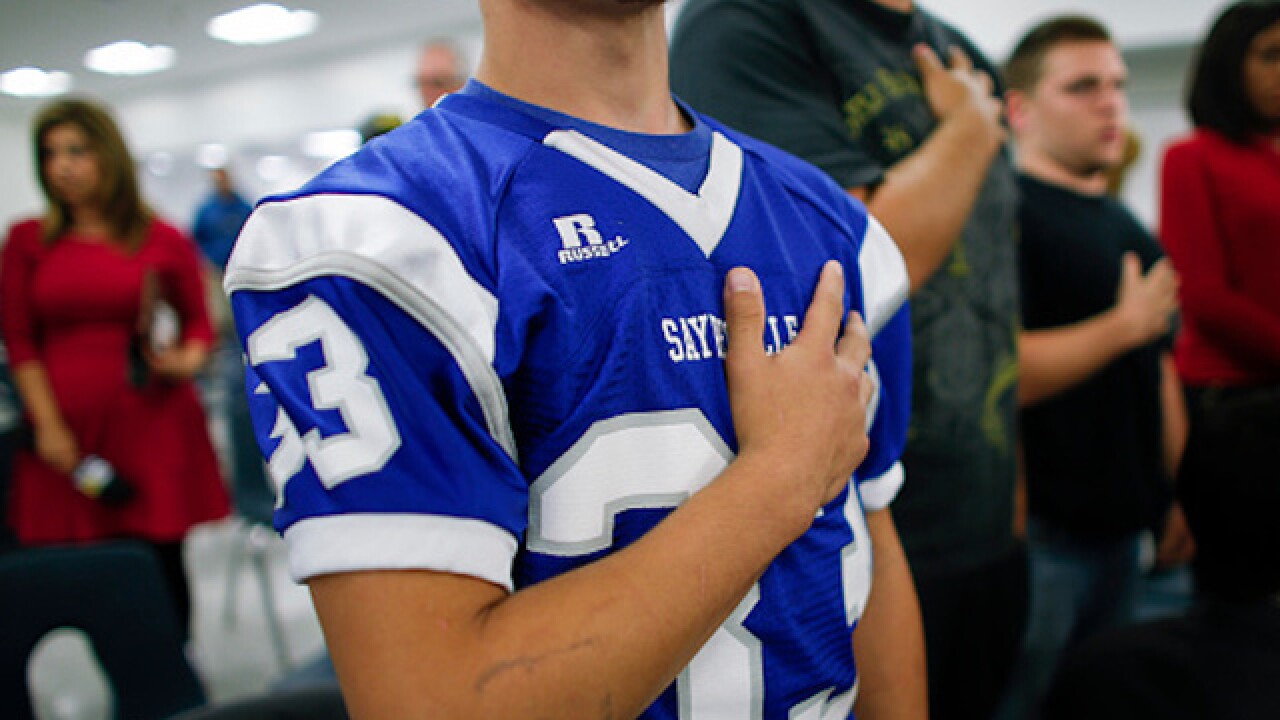 Copyright 2018 Scripps Media, Inc. All rights reserved. This material may not be published, broadcast, rewritten, or redistributed.
Kena Betancur
PARLIN, NJ - OCTOBER 21: A current player of the Sayreville football team stands for the Pledge of Allegiance at a Board of Education meeting to support his team's coaches on October 21, 2014 in Parlin, New Jersey. The Sayreville War Memorial High School coaching staff were suspended by the school superintendent in the wake of a hazing scandal that involved sexual assault by the school's football team. State law requires the suspensions to be upheld by a majority vote of school board members, who voted 9 - 0 to approve the suspension of the five coaches. (Photo by Kena Betancur/Getty Images)

A high school in suburban Chicago has fired a driver’s ed teacher who told a student he must stand for the Pledge of Allegiance.

The mother of Shemar Cooper, a 15-year-old sophomore student at Eisenhower High School, says driving instructor Vince Ziebarth — who had been employed as a full-time driving instructor at the school for the last three years — told her son that he would not be able to drive with him if he continued to sit during the Pledge of Allegiance.

According to Ziebarth, he drove with Cooper for one lesson in February. During the lesson, Cooper asked when Ziebart would take him out again. That’s when the teacher told him how he felt about the Pledge of Allegiance.

"I told him I stand to honor the sacrifice and bravery of those who made the ultimate sacrifice for our country. It doesn't mean America is perfect, or that we agree with everything going on," he told the Chicago Tribune.

Cooper’s mother, Kelley Porter Turner, claimed that Ziebarth was infringing on her son’s First Amendment rights. She reportedly emailed Eisenhower High School and told them to “take care of it.”

Ziebarth says he stands by his decision, and says Cooper could have taken lessons with seven other driving instructors.

“I told him he can make a choice to sit, but as long as you choose to sit, you will not sit in my (drivers ed) vehicle. I did not tell him what to do," he told the Tribune.

This isn’t the first time the school has addressed the issue. Earlier this school year, a Spanish teacher was reprimanded when he grabbed cooper by the arm when Cooper refused to stand for the Pledge, and also told him “America sucks.”