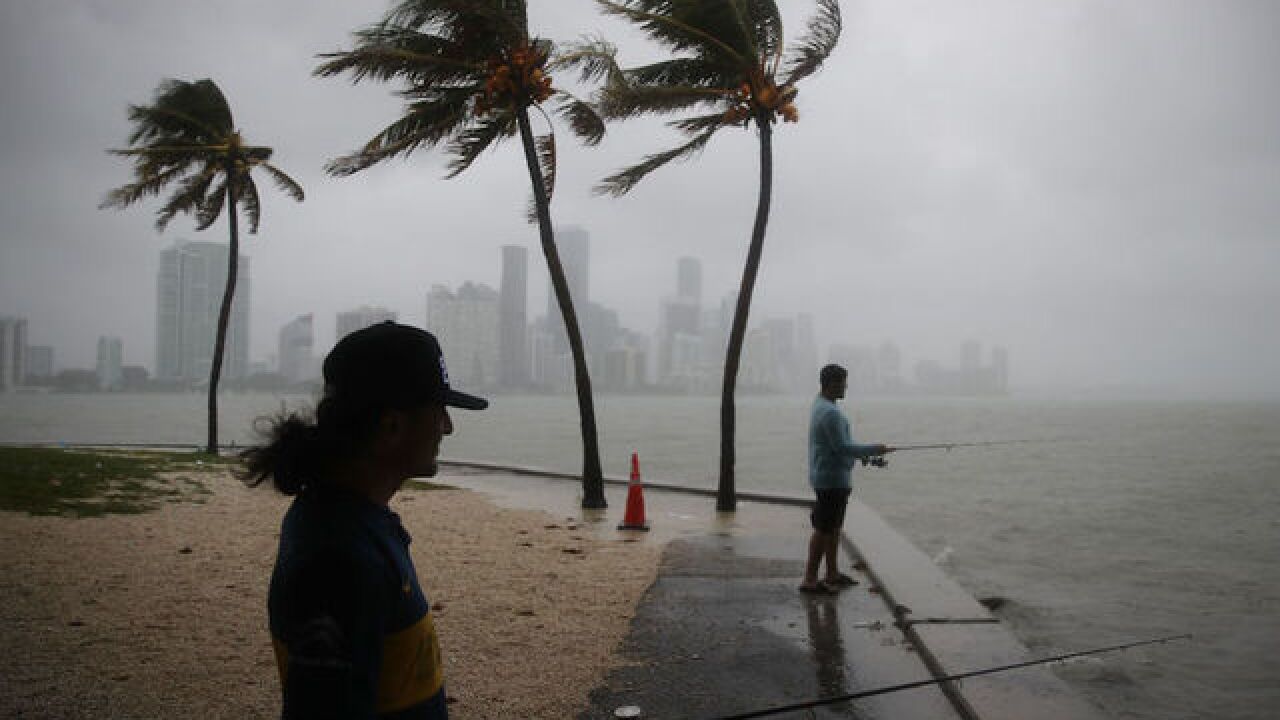 Image copyright 2018 Getty Images. All rights reserved. This material may not be published, broadcast, rewritten, or redistributed.
Joe Raedle
<p>Walter Augier (L) and Jhon M. fish as rain and wind are whipped up by Tropical Storm Gordon on September 3, 2018 in Miami, Florida. Tropical Storm Gordon is heading into the Gulf of Mexico bringing heavy rain and gusty winds to South Florida as it heads for a northern Gulf Coast landfall on Tuesday as a strong tropical storm or possibly a Category 1 hurricane. </p>

Officials aren't taking any chances as Tropical Storm Gordon bears down on the Gulf Coast, with about 1.7 million people under a hurricane warning and another 6.5 million under a tropical storm watch.

The National Hurricane Center says it expects Gordon to strengthen into a hurricane before it reaches the north central Gulf Coast late Tuesday.

"Gordon is expected to bring life-threatening storm surge and hurricane conditions to portions of the central Gulf Coast where a Storm Surge Warning and Hurricane Warning are in effect," the center says. "All preparations to protect life and property should be rushed to completion, as tropical storm conditions are expected to arrive in the warning areas Tuesday afternoon."

Across the region, governments are making their preparations.

In New Orleans, Mayor LaToya Cantrell issued a voluntary evacuation notice for areas outside of the New Orleans levee system.

Cantrell said the city expects to see impact of the storm beginning late Tuesday and continuing through Wednesday. City Hall and government offices will close Tuesday for nonessential employees.

In anticipation of heavy rains, the Flood Protection Authority-East (FPA) has closed 21 floodgates on the Lake Borgne Surge Barrier near New Orleans, according to a press release.

These gates are all in Orleans and St. Bernard parishes, primarily along the Industrial Canal and susceptible to high-tide conditions if not closed, the city says.

As of Monday night, the FPA did not anticipate that the three pump stations at Lake Pontchartrain would be activated, but it is prepared to do so if the forecast changes and water levels reach key thresholds, according to the press release.

A number of schools across Louisiana, Alabama, Florida and Mississippi will not open Tuesday and others announced they would close early ahead of the storm's arrival.

About 300 vessels in Biloxi's harbors have been ordered to evacuate by 2 p.m. Tuesday due to the risk from storm surge there.

"We're asking people to do the same things that we're doing: prepare," said Mayor Andrew "FoFo" Gilich in a statement. "There's no reason to be alarmed. We're being told to expect rain and wind, and we're preparing accordingly. We expect our citizens to be doing the same."

"Right now, according to @NHC_Atlantic, the biggest impact to our state will be heavy rain, but in Florida, we know how quickly weather can change," he said.

"With the peak of hurricane season upon us, now is the time to get prepared. Make sure that you and your family have a plan in place in case of disaster."

As of 2 a.m. Tuesday, Gordon was about 280 miles east-southeast of the mouth of Mississippi River. The storm was headed west-northwest at 17 mph into the Gulf of Mexico and had maximum winds of 65 mph.

The NHC's hurricane warning covers all of coastal Mississippi and Alabama, with a tropical storm warning reaching to Morgan City, Alabama, and Florida's Okaloosa-Walton County Line.

A storm surge warning was in effect for the area between Shell Beach, Louisiana, and Dauphin Island, Alabama, with predicted heights of up to 3-5 ft if the peak surge coincides with high tide. A storm surge watch spreads west to the mouth of the Mississippi River and east to Navarre, FL.

The center says Gordon will bring heavy rainfall to southwest Alabama, southern and central Mississippi, southeastern and northeastern Louisiana and southeast Arkansas through late Thursdays. It warned the rain could cause flash flooding, with totals potentially reaching 8 inches and isolated maximum amounts of 12 inches.

Gordon has been marching up from the Florida keys, lashing south Florida with rain and tropical storm-force winds.

Geo Rodriguez decided to go for a walk on Hollywood Beach, north of Miami, on Monday morning and got caught in the storm. He captured video of people who were out and about, including a soaking-wet delivery person. Rodriguez said he is not concerned about the storm damaging his home