Going back to Cali: LeBron, Cavs down Warriors, force Game 7 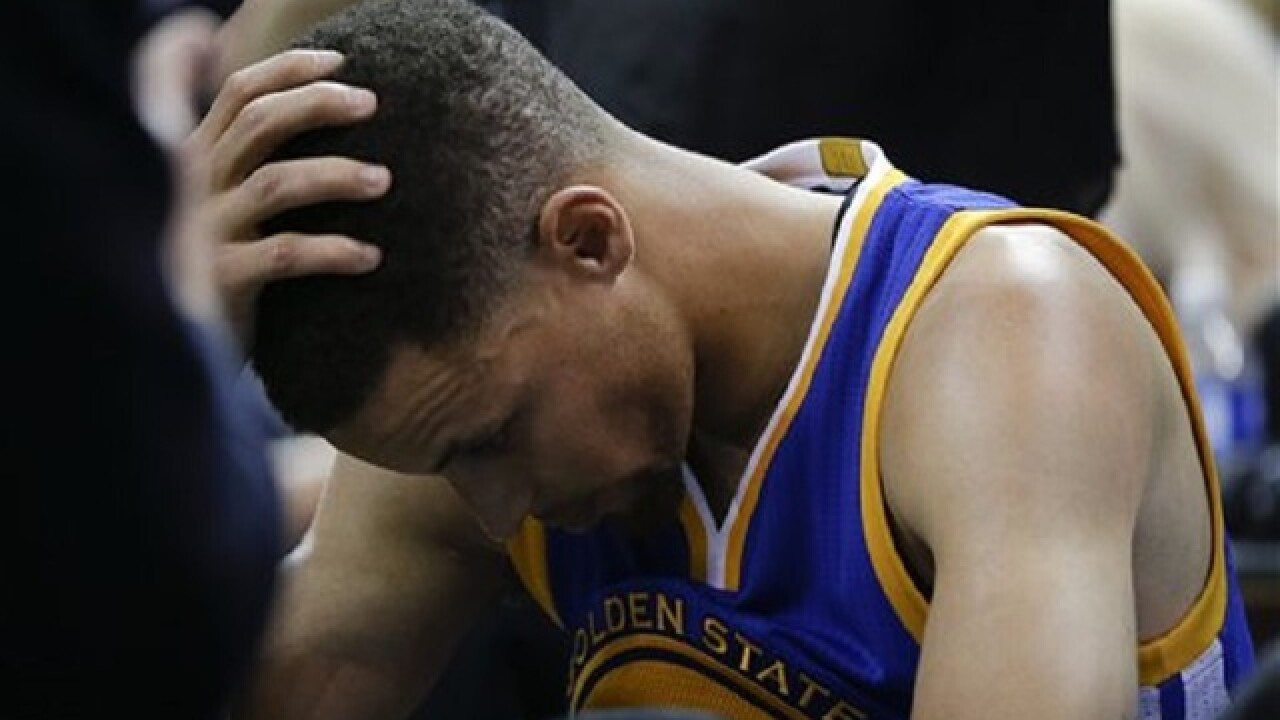 Tony Dejak
<p>Golden State Warriors guard Stephen Curry (30) holds his head on the bench during a timeout against the Cleveland Cavaliers in the second half of Game 6 of basketball's NBA Finals in Cleveland, Thursday, June 16, 2016. (AP Photo/Tony Dejak)</p>

By: Associated Press
Posted at 9:17 PM, Jun 16, 2016
CLEVELAND (AP) — From the edge of elimination to the brink of history.
LeBron James and the Cleveland Cavaliers have pushed the NBA Finals to their limit. Game 7 is necessary.
James scored 41 points, delivering another magnificent performance with no margin for error, Kyrie Irving added 23 and the Cavs sent the finals packing for California by beating the rattled Golden State Warriors 115-101 on Thursday night to even this unpredictable series and force a decisive finale.
Cleveland saved its season for the second time in four days and will head back to Oakland's Oracle Arena for Sunday's climactic game with a chance to become the first team to overcome a 3-1 deficit in the NBA Finals, and give this title-starved city its first major sports championship since Dec. 27, 1964.
"One more game left," James said. "I'll play it anywhere."
James added 11 assists, eight rebounds and again outplayed two-time MVP Stephen Curry, who fouled out and was ejected in the fourth quarter.
The Warriors never imagined being in this spot. The defending champions, who powered their way to a record 73 wins in the regular season, won the first two games by 48 combined points. But Curry and Co. have lost their touch, their poise and are in danger of seeing their historic season — and a second title — vanish.
Curry got tossed with 4:22 left after he was called for his sixth personal foul, cursed several times at an official and fired his mouthpiece into the front row, striking a fan. Curry finished with 30 points, Klay Thompson had 25 and Draymond Green, back from a one-game suspension, had 10 rebounds.
Warriors coach Steve Kerr felt the officiating was biased against Curry, who had never been tossed before.
"He gets six fouls called on him, three of them were absolutely ridiculous," Kerr said. "As the MVP of the league, we're talking about these touch fouls in the NBA Finals. I'm happy he threw his mouthpiece."
Curry walked off the floor smiling before making the long walk to the locker room.
"I didn't think I fouled either Kyrie or LeBron," said Curry, recounting fouls No. 5 and 6. "It was obviously frustrating fouling out in the fourth quarter of a clinching game and not being out there with my teammates. So it got the best of me, but I'll be all right for the next game."
On Wednesday, James called Game 7, "the two best words ever."
He'll live them once more, thanks to a spell-binding effort — the two-time champion had a hand in 27 consecutive points and 35 of 36 during a stretch in the second half — and put away the Warriors after they trimmed a 24-point deficit to seven in the final period. James scored 17 in the fourth before checking out to a thunderous ovation in the final minutes as Cleveland fans chanted, "Cavs in 7!" and "See you Sunday!"
"It's LeBron being LeBron," Cavs coach Tyronn Lue said. "He's one of the greatest of all-time. Our back was against the wall and he took it upon himself, him and Kyrie, they put us on their backs. They've got us to where we wanted to be — and that's Game 7."
James is one win from cementing his legacy by ending Cleveland's 52-year sports championship drought and winning his third title, the one the kid from Akron came home to win.
In typical Cleveland fashion, there were some heart palpitations in the fourth. The Cavs were up 70-46 in the third, and when J.R. Smith blindly dropped a lob pass to a trailing James for a dunk, Quicken Loans shook with noise and thousands of fans packing a plaza outside the building began thinking about where they might spend Father's Day.
The Warriors, though, weren't done. On the same floor where they won their title exactly one year ago, Thompson made a pair of 3-pointers as Golden State, playing without injured center Andrew Bogut, used a 25-10 run to pull within 80-71 entering the final 12 minutes.
But James, as he did while winning two titles in Miami, made sure those belonged to him and extended Cleveland's dream season.
For the Warriors, a golden year is suddenly stained.
"The playoffs haven't been easy," Curry said. "But we've given ourselves a chance with Game 7 at home."
BIG GAME JAMES
James has scored 41 points in the past two games, continuing a trend of bailing his team out in its darkest hour. He's now 9-8 in elimination games.
"He's a fantastic player, brilliant player," said Kerr, who played with Michael Jordan.
TIP-INS
Warriors: F Harrison Barnes missed all eight shots. ... Green and Thompson played in their 103rd game this season, most in the NBA. That was also the highest total in the league a year ago, with Barnes getting to 103. ... Andre Iguodala's start was his third of these playoffs. He had 5 points in 30 minutes. ... Bogut's injury will take 6-to-8 weeks to heal, essentially knocking him out of playing for Australia in the Rio Olympics.
Cavaliers: James is the first player to have consecutive 40-point games in the finals since Shaquille O'Neal in 2000. ... Cleveland joined Rochester (1951) and Boston (1966) as the only teams to trail 3-1 and force a Game 7. ... Tristan Thompson had 16 rebounds and went 6 of 6 from the floor. ... Seldom-used reserve G Dahntay Jones came off the bench in the last two minutes of the first half and scored 5 points.
Copyright 2016 The Associated Press. All rights reserved. This material may not be published, broadcast, rewritten or redistributed.