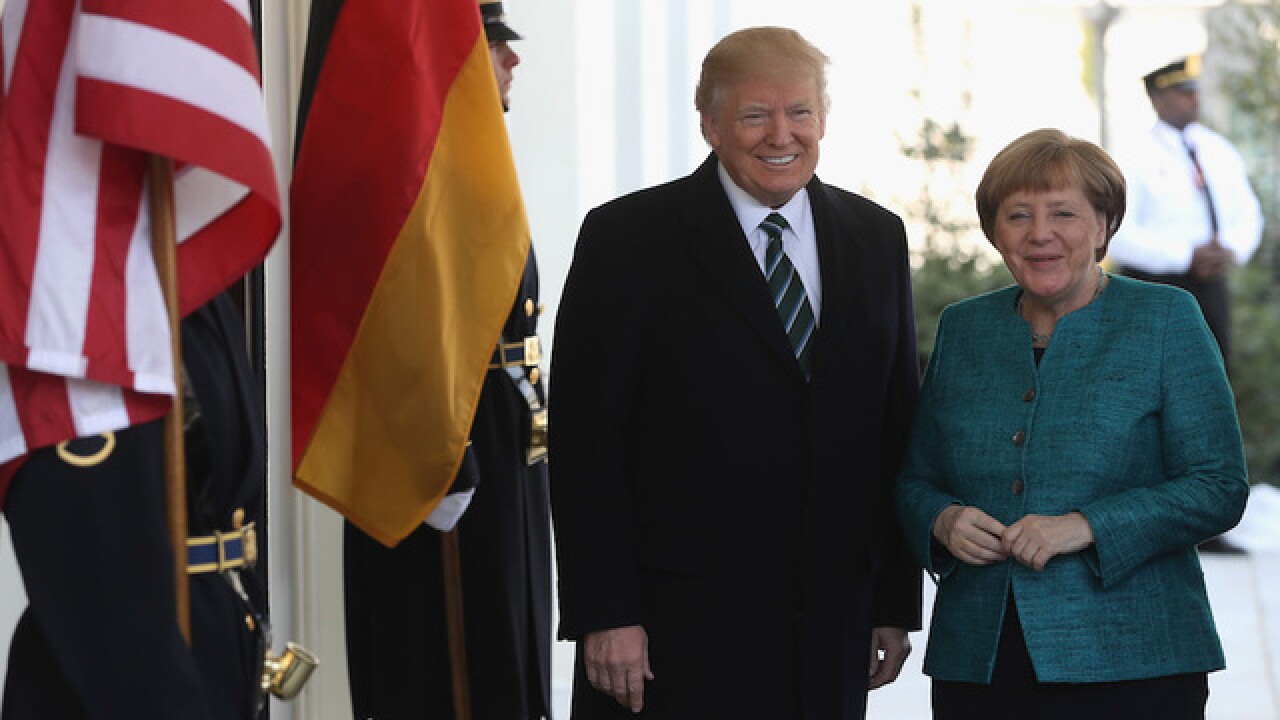 Under normal circumstances, the President could expect to face a grilling over embarrassing revelations that his White House apologized to Britain for citing reports the Obama administration used the UK to tap Trump's phones while he was a candidate.

But in the controlled environment of Friday's news conference, in which each side typically selects two questioners, it's unclear whether the White House will get a question on the issues.

The fact that Trump could face questions about wiretapping is deeply ironic. After all, Merkel is a leader whose phone was tapped -- by the United States, under and a National Security Agency program that was exposed by Edward Snowden and cancelled by Obama following a deep diplomatic embarrassment.

Merkel also grew up in East Germany, where many ordinary people were victims of a phone tapping and surveillance program perpetrated by the communist regime's Stasi secret police so she is deeply sensitive to such issues.

Apart from the domestic political storms that are battering the White House, the news conference and Merkel's visit to the White House are coming at a crucial moment for US-German relations.

The German Chancellor is trying to forge a relationship with Trump despite suspicion over his political views. She congratulated the President after his election win in a statement that also contained a defense of Western values -- amid concern in Germany that his stances on issues like immigration run counter to the principles that have sustained the Western alliance.

Germany, the most powerful political force in the European Union, has also been deeply concerned by Trump criticisms of NATO and deep skepticism inside the White House about the EU itself.

Trump is likely to publicly stress the need for NATO members to take more seriously a requirement to spend 2% of GDP on defense. The German government fell well short of that number last year, hitting 1.19 %. Though it has committed to boosting defense spending this year, Germany will still fall well short of the 2% target.

Friday's meeting will attempt to stir some personal chemistry between two leaders who seem far removed in temperament and instinct.

Merkel, who takes a cautious, analytical approach to politics, was also one of the few world leaders who appeared to forge a deep connection with Obama, with whom she was something of a kindred spirit.

Trump is more outspoken and improvisational and has little time for diplomatic niceties. He has, for example, heavily criticized Merkel's decision to allow hundreds of thousands of refugees into Germany, a move that is a key issue in her re-election race this year.

But both sides are likely to try to move on from past tensions. The pragmatic Merkel is now on her third US president and appears to be looking to find a way to forge a relationship with Trump without buying into his political values.

"My expectation is that they'll have a very positive, cordial meeting," said one senior administration official last week.

Another administration official said that the President hoped to get Merkel's advice for dealing with Russian President Vladimir Putin, who, according to US intelligence, ordered cyber-meddling in last year's presidential election and tried to help Trump.

The two companies employ thousands of American workers, a point Merkel hopes will come through when the pair get to discussing trade issues -- including Germany's trade surplus, which has rankled the Trump camp.