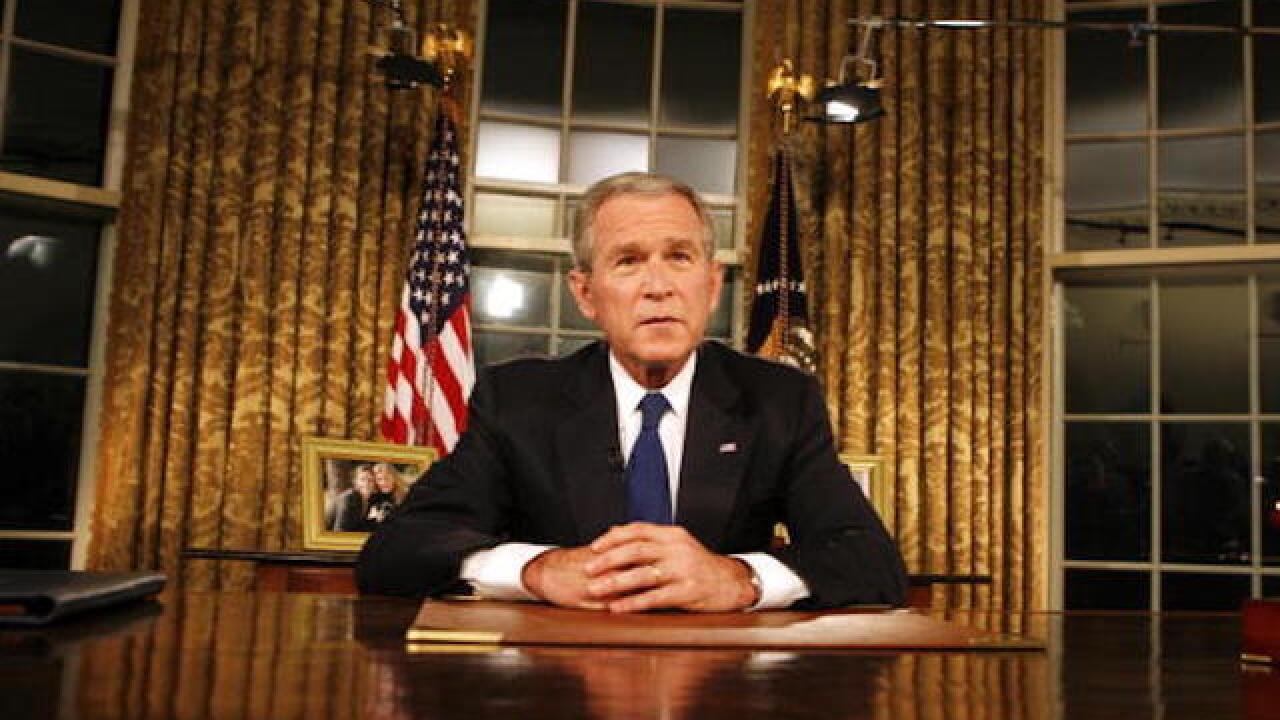 Copyright 2017 Scripps Media, Inc. All rights reserved. This material may not be published, broadcast, rewritten, or redistributed.
Pool
<p>WASHINGTON - SEPTEMBER 13: (AFP OUT) President George W. Bush poses for photographers after addressing the nation on the military and political situation in Iraq from the White House September 13, 2007 in Washington, DC. (Photo by Aude Guerrucci-Pool/Getty Images)</p>

By: CNN
Posted at 3:31 PM, Mar 02, 2017
WASHINGTON (CNN) -- Former President George W. Bush and Michelle Obama are surprisingly close considering their political differences, and the 43rd president credits the former first lady's appreciation for his sense of humor as a key reason.
The unlikely pair have often been photographed together during formal events. When Obama embraced Bush at the opening ceremony for the Smithsonian National Museum of African American History and Culture last September, the photo of their warm interaction went viral.
"When I saw her, it was a genuine expression of affection," Bush told People magazine as he reflected on the moment. The interview was posted on Wednesday.
The former President is back in the public eye to promote his new book, "Portraits of Courage," a volume of his paintings of military veterans.
"She kind of likes my sense of humor. Anybody who likes my sense of humor, I immediately like," Bush said.
The pair are often seated next to each other during events, including the interfaith memorial service for the victims of the Dallas police shooting in July, last year's funeral for former first lady Nancy Reagan and the 2015 commemoration of the 50th anniversary of the historic civil rights march in Selma, Alabama.
"I can't remember where else I've sat next to her, but I probably have a few wisecracks and she seemed to like it OK," Bush said. "I needle her a little bit and around her, I'm fairly lighthearted. (The Obamas) are around serious people all the time and we just took to each other."
Most recently, the Bushes attended President Donald Trump's inauguration on January 20, where they were seen chatting with the Obamas.
The-CNN-Wire
™ & © 2017 Cable News Network, Inc., a Time Warner Company. All rights reserved.
KNXV