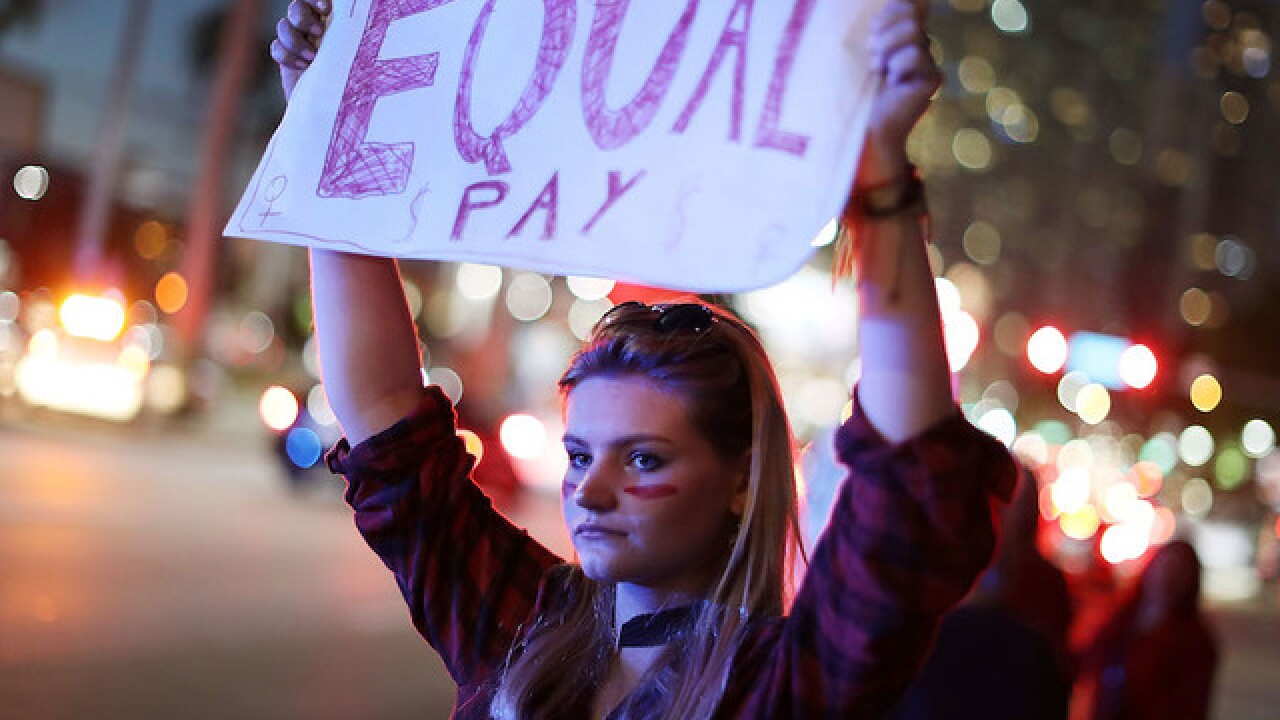 Copyright Getty Images
Joe Raedle
<p>MIAMI, FL - MARCH 08: Clarissa Horsfall holds a sign reading, 'Equal Pay,' as she joins with others during 'A Day Without A Woman' demonstration on March 8, 2017 in Miami, United States. The demonstrators were calling for woman to have equity, justice and human rights for women and all gender-oppressed people. (Photo by Joe Raedle/Getty Images)</p>

Of the 15 highest paid executives in Corporate America last year, two were women.

The highest paid man made nearly $244 million, according to an analysis by Equilar , an executive and board data provider. The top-paid woman? She made less than $41 million.

The wage gap between men and women, which runs throughout the business world, is widest at the top.

"The wage gap exists at all levels, but it's most narrow at the lowest-paid jobs, and that's because everybody really has a bad deal there," said Ariane Hegewisch, a researcher at the Institute of Women's Policy Research. "At the top, really, if you miss out on one step ... it makes a big difference."

Compensation in the C-suite is heavily driven by stock options and stock grants -- executives are rewarded, often in outsize ways, with equity in their companies. The more the stock goes up, the richer they can become.

Still, women lagged far behind men of similar ranks on the top 15 lists of both genders.

For example, the highest paid man in 2016 was Walmart E-Commerce CEO Mark Lore. His base pay was $346,154, but stock-based compensation added another $242 million, according to Equilar. That stock award was largely due to Walmart's acquisition of Jet.com, which Lore founded.

The highest paid woman, Oracle CEO Safra Catz, made $950,000 in base pay. Her stock compensation -- $22 million -- was a fraction of Lore's, Equilar calculated.

According to Anna Beninger, senior director of research at Catalyst, an organization researching women and work, the negotiation leverage is very different for women at the top.

"Few women make it to those jobs where they're making hundreds of millions of dollars, so they're really seen as the exception, rather than the rule, and so that impacts their ability to negotiate," says Beninger.

Women also tend to be treated differently during the negotiation process, she adds. Sometimes, asking for higher pay can actually backfire.

"When women do negotiate as aggressively as men, they're not expected to do so ... and they're not as effective as a result," Beninger says.

According to Beninger, women's first salaries are likely to affect their career earnings later in life.

"When you look at the trajectory of people's careers, by the time they make it to the upper echelon -- of the very few women who do make it, for a variety of factors -- that gap that began early in their careers just grew significantly over time," she says. "It's really an exponential gap -- it's not that surprising that you see such a big gap in those most senior level positions."

A recent survey from McKinsey and Lean In found that women fall behind early on in their careers.

Experts say even a first negotiation can be a crucial opportunity for women to conquer these hurdles. Making more in a first job means a female employee will then make more in her next job, and then more in her next.

Some states have now banned employers from asking about salary history, making it less likely that women's low first salaries could haunt them later in their careers.