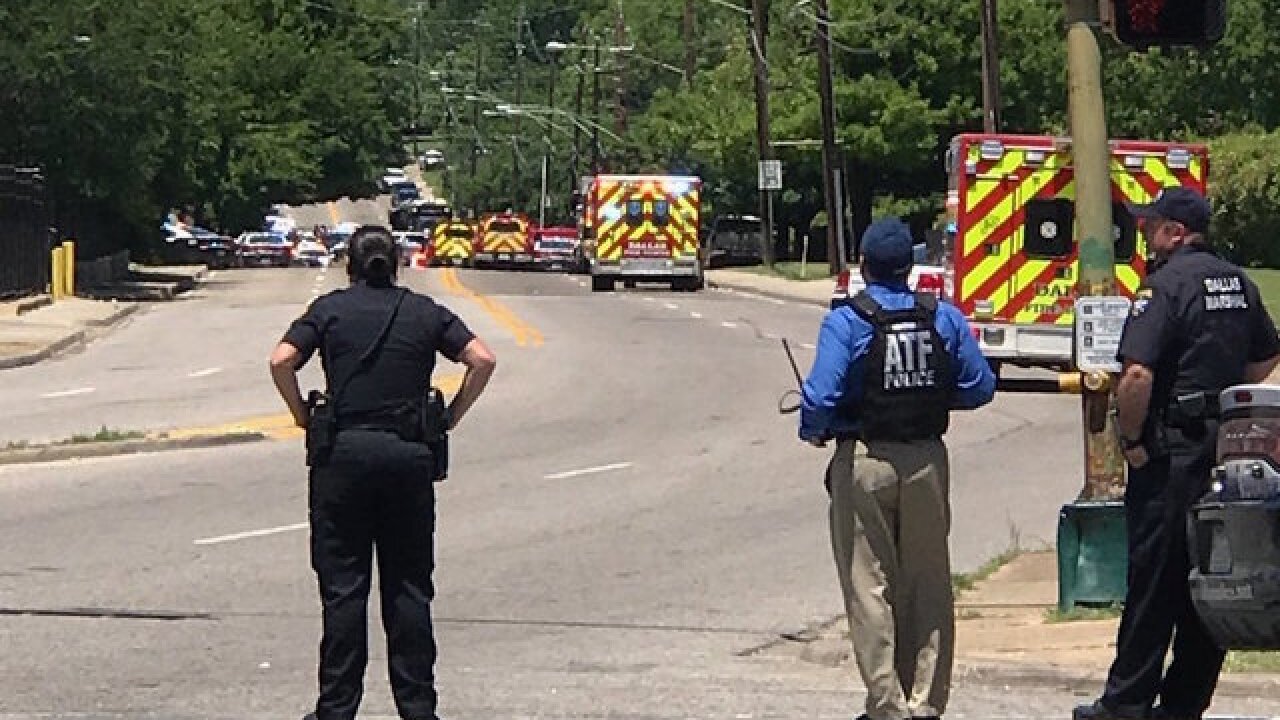 Copyright 2018 Scripps Media, Inc. All rights reserved. This material may not be published, broadcast, rewritten, or redistributed.
KDAF
**Embargo: Dallas-Ft. Worth, TX** A gunman opened fire on an emergency medical technician vehicle, critically injuring a paramedic with the Dallas Fire-Rescue Department on Monday, according to a statement from the city's police department.

A gunman opened fire on a paramedic Monday morning while the paramedic was treating a civilian with a gunshot wound, Dallas police said.

The suspect was later found dead from a "self-inflicted wound" when a police robot searched a home on the block where the shooting occurred, Mayor Mike Rawlings said.

Police have identified the shooter as Derrick Lamont Brown, according to a law enforcement source with knowledge of the investigation.

A second deceased person was found in the same home. Police have not identified the second person.

The incident reportedly began as a "simple dispute between two neighbors that escalated into a shooting," Interim Dallas Police Chief David Pughes said.

"They served to try to take care of a citizen," the chief said. "Unfortunately, we had a tragic event where they were shot at."

Shortly afterward, Dallas police officers, responding to an active shooter call around 11:30 a.m., arrived to discover an ambulance at the scene. The officers also found the paramedic and another person down in the street, Pughes said.

It is believed the gunman was in the street shooting at that point, Pughes said. Officers took cover from the gunfire, he said.

Then a police sergeant arrived and noticed the paramedic was severely wounded, Pughes said. The unidentified officer "went above and beyond, as many of the Dallas police officers do each and every day," he said.

"He went in alone, and he pulled the paramedic out, placed him in his squad car and drove him to Baylor Hospital," Pughes said.

Dallas officials credited the officer with saving the paramedic's life.

"In my mind, someone that was not mentally stable dealt a lot of pain this afternoon," Rawlings said. "And our heroic paramedic stepped in to help a citizen putting their lives on the line."

The officer "rescued that individual, and now the doctors get to do their part," the mayor said.

"That's how we come together as a city to protect each other, to have each other's back," Rawlings said.

The injured paramedic underwent surgery Monday afternoon and was in critical but stable condition," Rawlings said. The paramedic and the wounded citizen were in the intensive care unit at a local hospital.

Another Dallas officer was also treated at the scene for an unspecified injury, authorities said.

Police closed roads near the intersection of Interstate 30 and Dolphin Street shortly after the shooting.

"Confirming one paramedic shot while responding to a call. No detail at this time. Thoughts and prayers are with all impacted," Dallas Fire-Rescue tweeted at that time.

The shooting happened near the Dallas Fire-Rescue's Dodd J. Miller Training Center, about a quarter-mile south of Interstate 30.

The FBI is assisting Dallas police in the investigation, according to FBI spokeswoman Lauren Hagee.