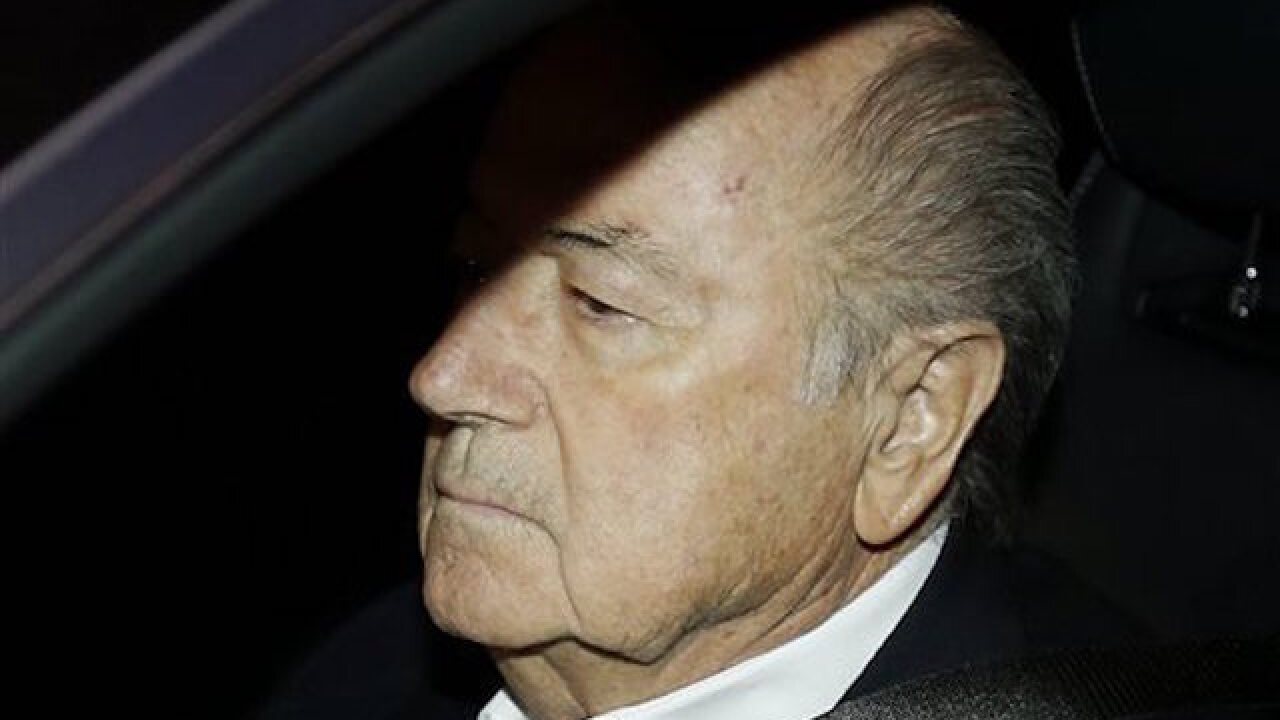 Michael Probst
<p>FIFA President Sepp Blatter drives his car into the garage of the FIFA headquarters on his way to work in Zurich, Switzerland, Tuesday, Sept. 29, 2015. Blatter was questioned by Swiss investigators about why FIFA paid 2 million Swiss francs (about $2 million) to UEFA President Michel Platini in 2011 for work supposedly carried out at least nine years earlier. (AP Photo/Michael Probst)</p>

Some of the contracted payments appear to break Swiss law, and evidence will be given to American and Swiss federal prosecutors who are investigating corruption implicating the world soccer body, lawyers for FIFA said Friday.

"The evidence appears to reveal a coordinated effort by three former top officials of FIFA to enrich themselves through annual salary increases, World Cup bonuses and other incentives totaling more than 79 million Swiss francs — in just the last five years," said Bill Burck of Quinn Emanuel, the U.S. law firm retained by FIFA during its corruption crisis.

The secretly agreed bonuses were significantly more than Blatter's base salary — 3 million Swiss francs ($3 million) in 2015 — which FIFA published in March.

Valcke got a $2 million basic salary before being fired, but was awarded a $10 million World Cup bonus for 2014 and was due $11 million from the 2018 tournament in Russia.

The police raid Thursday included searches in the office of Kattner, who was fired last week.

"Documents and electronic data were seized and will now be examined to determine their relevance to the ongoing proceedings," the Swiss federal prosecution office said Friday.

Both are suspected of criminal mismanagement of FIFA money. Blatter and Valcke deny wrongdoing but were banned for six and 12 years, respectively, by FIFA's ethics committee.

No criminal proceedings have yet been opened against Kattner, who joined FIFA as finance director in 2003 and got bonuses totaling 7 million Swiss francs from the past two World Cups.

At the height of FIFA's crisis last year, Kattner was given further cash guarantees from FIFA's $5 billion income from the 2014 World Cup.

On May 31, 2015 — four days after the U.S. and Swiss investigations were revealed by police raids on Zurich's Baur au Lac hotel and FIFA — Kattner's contract was extended through 2023 with extra clauses guaranteeing termination pay and indemnification for legal fees and restitution claims.

Kattner's payments were all contracted and approved by the compensation committee FIFA created in 2013 and known to FIFA's auditors, KMPG, a spokesperson for the German official said in a statement.

"Additionally, FIFA will refer the matter of these contracts and payments to the Ethics Committee for its review," FIFA said in a statement.

Any ethics investigation could affect two senior officials at the heart of FIFA's financial operation. Finance committee chairman Issa Hayatou, the interim FIFA president while Blatter was suspended, and former audit panel chairman Domenico Scala both approved at least one of the contracts revealed Friday.

Infantino has been criticized for a breakdown in his relationship with Scala, who resigned on May 14. The FIFA president privately described as "insulting" a salary offer from Scala, reported as $2 million without bonuses.

Since Kattner's firing on May 23, German language newspapers have been fed a series of leaked minutes from meetings and FIFA emails which sought to turn scrutiny on Infantino.

Elected four months ago to replace Blatter, Infantino pledged reform and a changed culture at FIFA and was expected to face resistance from insiders. The 45-year-old Swiss official also arrived with a reputation as a critic of FIFA during seven years as secretary general of European soccer body UEFA.

Infantino has not publicly criticized FIFA's former regime but the contracts revealed Friday by its top legal advisers seem to have exposed a culture of secrecy and entitlement.

Valcke and Kattner signed eight-year contract extensions on April 30, 2011 — five weeks before Blatter was due to contest a bitterly fought presidential election against Mohamed bin Hammam of Qatar.

Blatter and Valcke did not immediately respond to requests for comment.