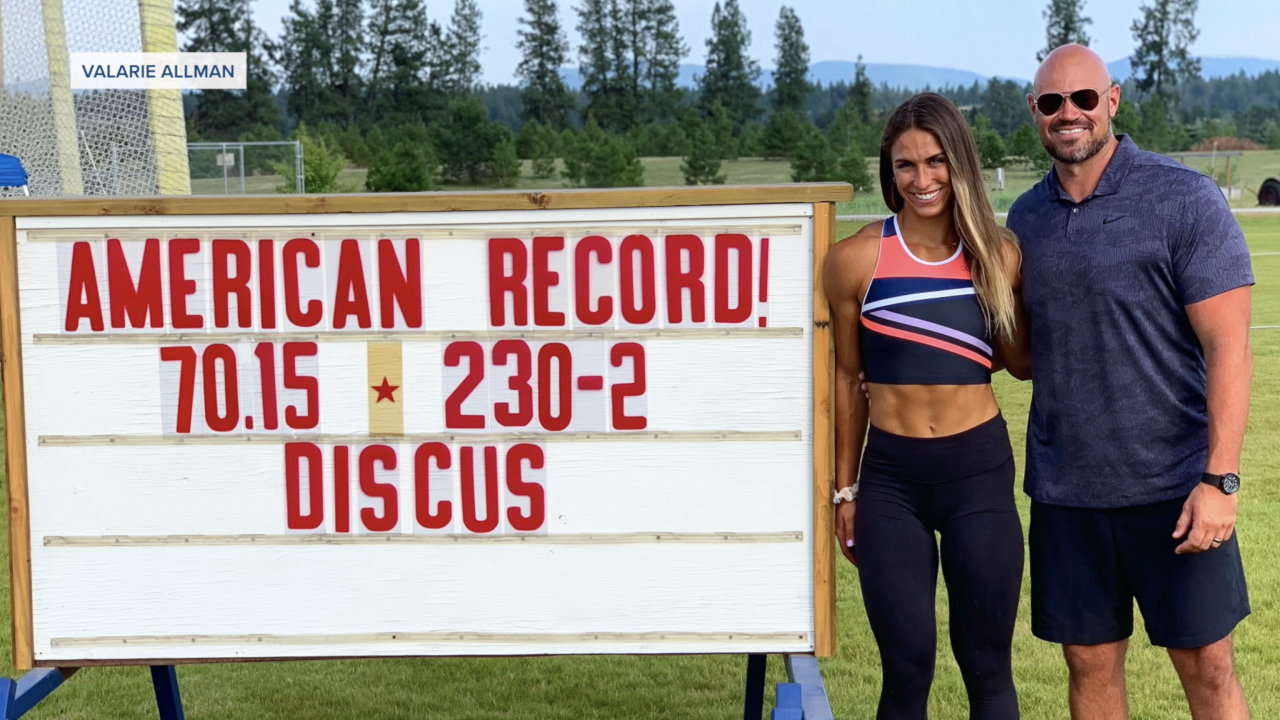 AUSTIN, Texas -- Valarie Allman has been throwing discus for 10 years.

“When you throw a discus it takes about two seconds, and it’s a combination of power, of grace, of strength… I like to think of it as a dance still," Allman said.

She started sophomore year of high school. But it’s her dance background that she credits for her quick progression in the sport.

“I had a weird knack for it," Allman said. "I think all those years of learning choreography and spinning and doing pirouettes weirdly carried over to the discus, and it kind of just seemed like a good fit right from the start.”

Multiple days every week, she trains hard in the gym guided by her coach Zebulon Sion.

“I’m responsible for every facet of her training," Sion said. "So that includes the strength-training concepts, if we do any type of running, fitness oriented things, plyometrics, and then of course the actual throwing.”

Their chemistry is undeniable.

At only 25 years old, Allman is considered a pro athlete. Her rigorous training is fueled by her desire to be a part of the next Olympics.

“When I graduated college, I think that was the motivation to keep training. I missed the team in 2016 by three feet and it was kind of in that moment that I realized that I really wanted to try again,” Allman said.

Consistency, discipline, attention to detail. Allman’s focus didn’t falter until she found out the 2020 Olympics had to be postponed.

“It was pretty heartbreaking," Allman said. "I mean, to feel like you’ve put in so much to be prepared for it and to be healthy and to do everything right to feel like you’d have a chance to make the team and then for it to be postponed I think it kind of just made me question everything.”

“Her motivation to throw kind of was gone a bit for her for a while," Sion said. "And then we kind of got to a point after a month, month-and-a-half of training going well in terms of lifting and training -- our goal was to get fit, get strong and refine the technical model that she has to get to a point where we could be at our best if that opportunity would come.”

The three-foot difference that kept her from qualifying for the Olympics in 2016 is the difference she surpassed to become the first and only American woman to throw past 70 meters.

“When you’re throwing that type of distance, three feet is significant. So to break it by almost three feet was huge actually,” Sion said.

“When they measured the throw and they read out the numbers and it started with a seven I instantly burst into tears. I was absolutely shocked,” Allman said.

Allman says 70 meters is the ultimate barrier. In the past 20 years, only two other women in the world have thrown past 70 meters.

“Now looking back it’s wild the think it was just a sliver of a difference of giving up when we were on the brink of something incredible,” Allman said.

“We could have called it we could have said 2020 is a bust ya know let’s move on," Sion said. "But the amount of time, energy, effort all the things to put in over five months of uncertainty and then for that to happen – I don’t know if I could be more proud.”

The same day of her record-breaking throw was the exact day she would have been competing in Tokyo had the Olympics continued. However, with her dedication to improvement, Sion believes there’s a great future ahead of Allman.

“I mean I think the goal is just to throw farther and to keep throwing far more often. I mean it’s pretty simple,” Allman said.

Even more simple when you’re having fun.