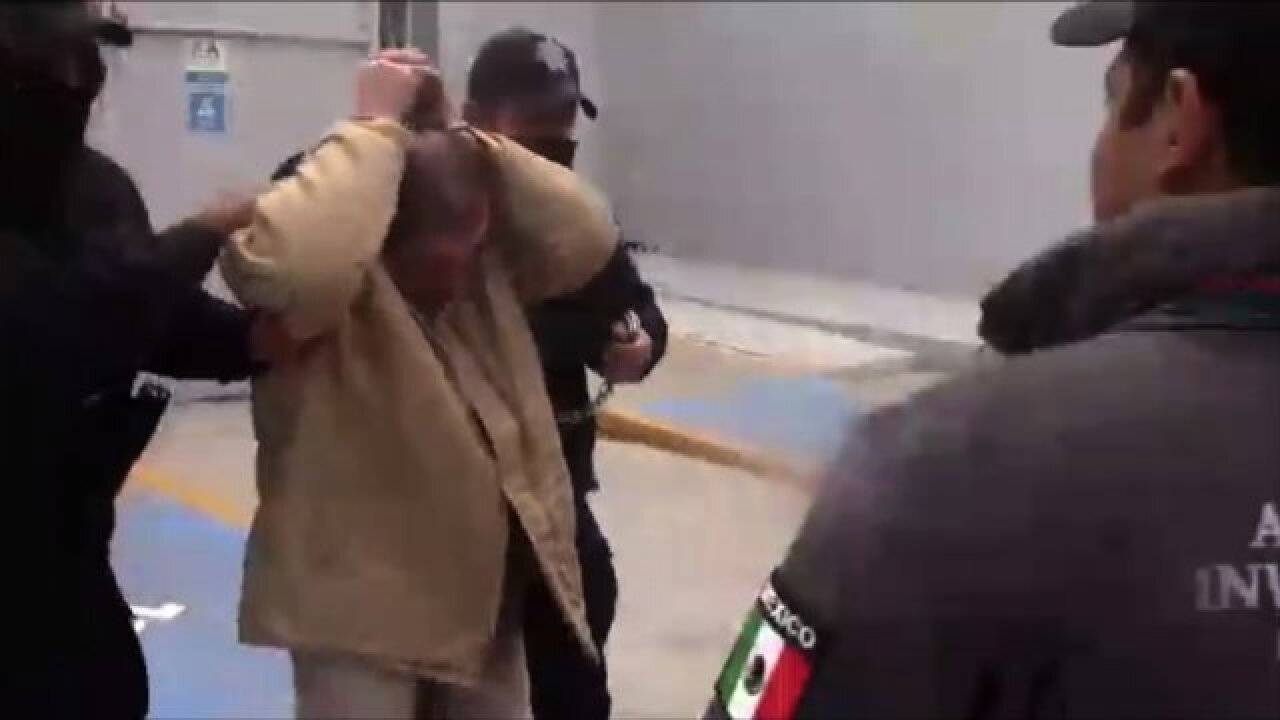 CNN
secretaria de gobernacion
<p>Drug kingpin Joaquin "El Chapo" Guzman, a legend in Mexico through his dramatic prison escapes and years of staying just ahead of the law, arrived late Thursday in New York after his extradition to the United States.</p>

NEW YORK (CNN) -- The incessant shouts carry through air vents and heavy metal doors. It's how the segregated prisoners commiserate about life behind bars. They pound the walls until their fists are bloody. They clog toilets and flood their cells, urine and feces pouring into the corridors.

Such is life in the most restricted units of the nine-story Metropolitan Detention Center (MDC) in Brooklyn.

It's also the largest federal detention center, with inmates deemed "extremely dangerous, violent, or escape-prone," according to the US Justice Department.

MDC could be the new home of Joaquin "El Chapo" Guzman, the reputed drug kingpin who was extradited from his native Mexico and transported to the United States on Thursday.

Guzman was picked up by members of the US Drug Enforcement Administration, Immigration and Customs Enforcement and US Marshals. He was flown Thursday evening to New York.

A master of escape, "El Chapo" pleaded not guilty to 17 drug-related charges Friday in a federal court in Brooklyn, where he is to stand trial at a later date.

"As you looked into his eyes you can see the surprise, you can see the shock, and to a certain extent you can actually see the fear as the realization started to kick in that he's about to face American justice," Angel Melendez, special agent in charge for Homeland Security Investigations, New York, said after Guzman arrived in the city.

Melendez added that "no tunnel will be built leading to his bathroom, a reference to Guzman's most recent escape from a Mexican prison.

Court documents as well as interviews with former federal prison officials, penal experts and others shed light on the conditions he could expect across the shallow waters of the Rio Grande.

Once those metal doors close, 'it's pretty much over'

Life in America will be starkly different from Guzman's time at the maximum security Puente Grande prison near Guadalajara, Mexico, where he lived in relative luxury until he decided to break out in 2001 -- by some accounts, in a laundry cart.

Nor will it resemble his days at the Supermax-like Altiplano prison near Mexico City, where he slipped out through an elaborate underground tunnel and rode a motorcycle to freedom.

"He's definitely not going to be digging any tunnels in Brooklyn," former MDC prisoner Esteban Gonzalez told CNN in August. "I can tell you that. Once those metal doors close behind him, it's pretty much over."

But life will be different in Brooklyn, where Guzman and other cartel leaders were indicted in 2009 on charges of conspiring to import more than 264,000 pounds of cocaine into the United States between 1990 and 2005, according to the US Justice Department.

"El Chapo's basically going to be locked down ... in his cell 23 hours a day," Robert Hood, a former Federal Bureau of Prisons warden, said in an interview.

A criminal world who's who

At MDC, the architect of the largest illegal narcotics operation in the world will be one of about 1,800 prisoners slogging through the federal court system.

Upon arrival, the diminutive crime boss -- whose nickname is "Shorty" -- will receive a number that will identify him during his time in US government custody.

"You look through the narrow pane of glass on cell door and see who's coming and going," Gonzalez said. "You can tell who they are from the newspapers or the guards call out their names."

Inmates like Guzman are typically held in special housing units, where they are separated from the general population. The units are for inmates who are disruptive, pose a security risk or need protection as witnesses, according to the justice department.

Power and notoriety can be commodities in prison

It will be critical to keep Guzman isolated, according to Hood.

The worst of the worst are confined in administrative maximum special housing, which have stricter restraint policies, hand-held cameras to record detainee movements and cell cameras. The so-called admax units were created in New York after a former aide to the late Osama bin Laden in 2000 stabbed a federal corrections officer in the eye with a comb sharpened into a shank.

"He's going to be different than the terrorists and typical spies and gang leaders only because he does have the charisma," Hood said. "He does have the money connections in the United States. You want to cut the head off the snake quickly and separate him."

Power and notoriety can be commodities behind bars.

"El Chapo is definitely going to have respect," said Gonzalez, who did 18.5 years in the federal system for firearms possession and a prison assault.

"People are not going to want to mess with him because they know he has connections and the means to get some things done. He can pay other prisoners to get violent on somebody," he added.

Still, Guzman, whose net worth was once estimated at $1 billion by Forbes magazine, doesn't have to resort to violence.

"He will also try to persuade you by making you rich," said Jim Dinkins, retired head of investigations for the US Department of Homeland Security.

'El Chapo is next door'

Life in isolation can be maddening.

Prisoners interminably wail, scream and pound the walls, according to Gonzalez, who spent nearly three years in special housing at MDC and another federal facility in Manhattan.

They spread feces, other human waste and body fluids throughout their cells or hurl it at officers. They mutilate their bodies with razors or writing utensils.

"Some inmates are so miserable that when they hear El Chapo is next door, they'll start screaming and banging on the wall to harass him because he's famous," Gonzalez said.

"They taunt and scream at you. They're stressed out. They'll start an argument just to have a conversation. Nobody talks to them. They say disrespectful things about your mother."

The 7-by-12-foot cells have bunk beds with meager mattresses, a toilet and sink, a shower and a small metal seating area.

"It will be very, very lonely for El Chapo," said Arnett Gaston, former commanding officer of New York's Rikers Island jail complex and a consultant to the federal prisons bureau. "He won't have cellmates to talk to."

An hour of recreation a day takes place on a rooftop area enclosed by a chain link fence on all sides and overhead.

"That's where you get your fresh air, and the sunlight comes in," Gonzalez said. "You can't see sky from your cell."

Breakfast is served at 6 a.m., lunch at 11 a.m., and dinner after the 4 p.m. inmate count, according to the MDC's admission and orientation manual.

"The stuff being sent to special housing basically is the last of what they cooked that day," Gonzalez said. "If the general population was served chicken with a bone, they won't send us that. They don't want inmates in special housing to sharpen bones into weapons."

The MDC has gained notoriety over the years.

A New York appeals court last year revived a federal civil rights lawsuit claiming that Muslim, South Asian and Arab immigrants were subjected to beatings, strip searches and other abuses in the months after the 9-11 terror attacks.

The lawsuit, filed by the nonprofit Center for Constitutional Rights, named as defendants former MDC and high-level Bush administration officials.

The allegations earned the lockup the nickname "Brooklyn's Abu Ghraib," a reference to the scandal-plagued Iraqi prison used as an Army detention center in the early 2000s.

A 2003 Justice Department investigation found that prison guards slammed detainees into walls, twisted their arms and wrists, lifted restrained prisoners by their arms, and subjected them to humiliating strip searches. The men were being held on immigration violations.

In 2015, an appeals court revived a separate civil rights suit in which Gonzalez accused the MDC and a former warden of a racially motivated vendetta for holding him in isolation for more than two years. The lawsuit alleges the Federal Bureau of Prisons ordered the ex-warden to remove a Confederate flag on display in his office at the MDC.

The prisons bureau has declined comment about the pending litigation or preparations for receiving Guzman. The former warden named in the two civil rights lawsuits did not return repeated requests for comment.

Guzman lived like a king at Mexico's Puente Grande lockup, with catered food and frequent visits from women, according to Anabel Hernandez, an investigative journalist who writes about Mexico's cartels.

"This prison became a resort for El Chapo Guzman," Hernandez said. Food and liquor were delivered regularly from the finest restaurants in Guadalajara.

Guzman had been in federal custody since June 9, 1993, after being captured in Guatemala, near the Mexican border, on drug trafficking, murder and kidnapping charges.

A notorious ladies man, Guzman was known to keep an ample supply of Viagra in prison, Hernandez said. Guzman had conjugal visits as well as many trysts with prostitutes, female prison workers and inmates.

José Antonio Ortega, who in 2000 deposed Guzman in connection with the murder of Guadalajara Cardinal Juan Jesús Posadas Ocampo, said the drug trafficker acted like he "owned the prison."

"Look, I had my conjugal visit today," Ortega remembered Guzman telling him. "Afterward, I went to the steam room and then had to take a nap so that I could greet you as you deserve."

"It was as if he had invited us to his house," Ortega said.

How he escaped -- twice

Despite the comfort, Guzman cut short his 20-year sentence by escaping in a laundry cart on Jan. 19, 2001.

The breakout, however, may have been easier than that.

"Sir, you can leave now," high-level Mexican officials told Guzman after opening the prison doors, according to Hernandez.

Guzman would fork over tens of thousands of dollars a month to inmates, guards and prison officials, according to investigative journalist and author Jose Reveles.

The cartel leader was captured on February 24, 2014, in the Mexican beach resort of Mazatlán.

He then escaped again in July 2015 using a mile-long tunnel fitted with a lighting and ventilation system as well as a modified motorcycle that ran on tracks. Seven workers at the maximum-security Altiplano prison were charged in connection with his escape.

"The system is very vulnerable to corruption and intimidation, which are basically his tools," said Alejandro Hope, a former intelligence analyst in Mexico. "The tunnel could not have been built if he had not had complicity from within the prison."

In January 2016, Guzman was recaptured during a raid in the coastal city of Los Mochis in Sinaloa state. He was transferred five months later to a prison in Juarez, Mexico, just across the border from El Paso.

Mexican authorities had planned to turn over Guzman before Friday's inauguration of President-elect Donald Trump, a US official told CNN.