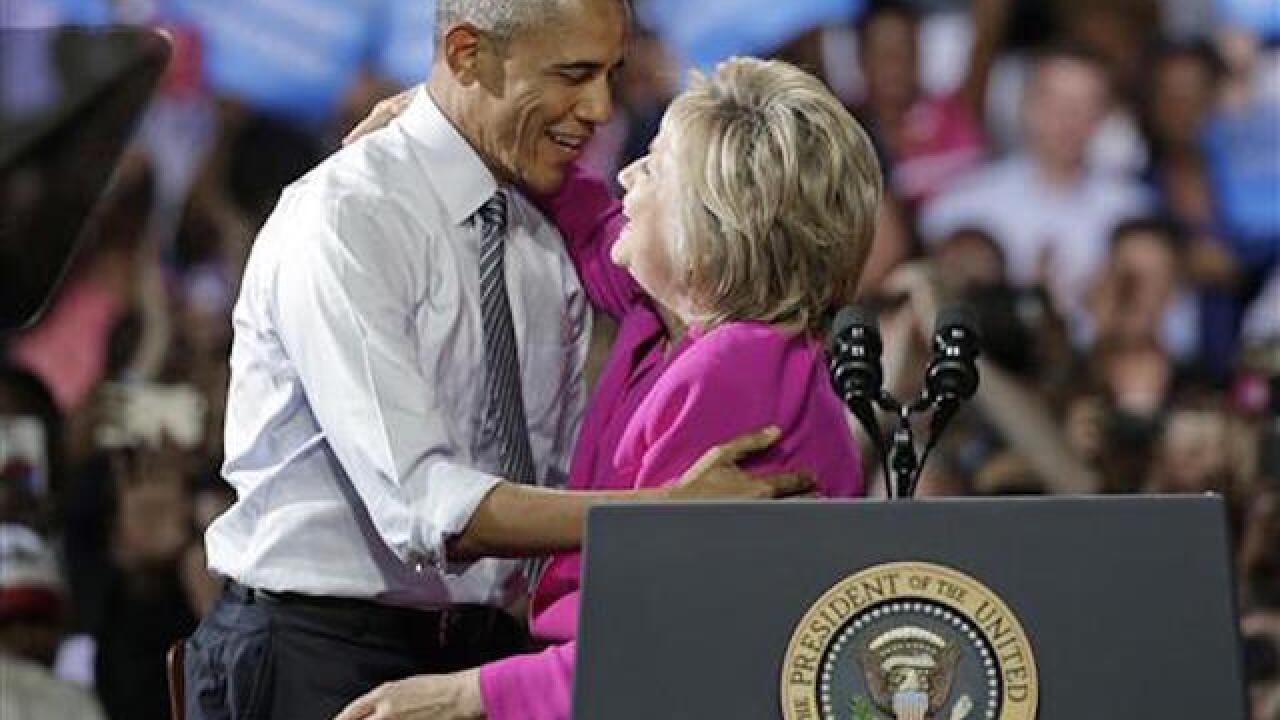 CHARLOTTE, N.C. (AP) — President Barack Obama vigorously vouched for Hillary Clinton's trustworthiness and dedication on Tuesday, making his first outing on the campaign stump for his former secretary of state just hours after his FBI director blasted her handling of classified material.

"I'm here today because I believe in Hillary Clinton," he said. "I have had a front-row seat to her judgment and her commitment."

The energetic Obama-Clinton appearance in North Carolina was a show of Democratic unity in a state Clinton is hoping to put back in the party's column. But the moment wasn't what her campaign and the White House imagined during the long primary season.

Shortly before the president and his would-be successor flew to Charlotte together, FBI Director James Comey announced he would not recommend charges against Clinton for her email practices — but only after he presented a searing description of her "extremely careless" handling of classified information that ensured the matter won't be going away.

The White House declined to comment on Comey's findings, saying the investigation was not formally closed and it did not want to appear to be influencing prosecutors. Still, the timing of the trip pulled the president into a controversy he has at times tried to keep at arm's length. His appearance with Clinton was a reminder that it was his appointee who declined to pursue criminal charges.

Yet Clinton and Obama did not veer from their display of lock-step unity. The duo flew to Charlotte together on Air Force One, they rode to the rally together in Obama's armored limousine, known as "The Beast." Clinton shared photos of her grandchildren, Charlotte and newborn Aidan, with the president.

As they were welcomed by a screaming crowd of supporters, the president led chants of "Hillary!" as they stood onstage under banners reading "Stronger Together."

Referring back to their own primary battle in 2008, Obama said, "We may have gone toe to toe, from coast to coast, but we stood shoulder to shoulder for the ideals that we share."

"It was no accident that charges were not recommended against Hillary the exact same day as President Obama campaigns with her for the first time," Trump said.

Clinton shot back early as she introduced the president, chiding Trump for once leading the questioning of the president's birthplace.

She said Obama was a man that "I was honored to stand with in the good times and the bad times, someone who has never forgotten where he came from. And, Donald, if you're out there tweeting, it's Hawaii."

Obama, too, got in a dig at Trump.

"Anybody can tweet but nobody actually knows what it takes" to be president, he said.

Obama's and Clinton's journey from political opponents to close political allies was a steady theme in the event.

The Clinton campaign hopes Obama can reassure voters about her experience, talent and character — and speak to their questions about her honesty and trustworthiness, some of which stem from the email investigation.

Indeed, the president took on the criticism of Clinton directly, casting the negative impressions of her as a result of her many years in the political spotlight. He also noted that he had benefited from Americans' desire for a fresh face.

"Sometimes we take somebody who's been in the trenches and fought the good fight and been steady for granted," Obama said, as Clinton sat behind him. "As a consequence that means sometimes Hillary doesn't get the credit she deserves. But the fact is Hillary is steady and Hillary is true."

Clinton noted that she has been Obama's loyal ally, lavishing praise on his record in the White House and saying he doesn't get the credit he deserves for overseeing the nation's economic recovery. She recalled her surprising decision to join his team after their bruising 2008 Democratic primary and shared memories of her four years in the administration, from crashing a meeting with the Chinese at a global climate summit to being in the Situation Room during the raid on Osama bin Laden

"He's made difficult, even unpopular, decisions for the good of our country," she said.

Obama and Clinton originally planned to make their first campaign appearance together in Wisconsin, a Democratic-leaning state where Clinton struggled in her primary fight with Bernie Sanders. Campaign aides viewed that as a way to forge Democratic unity after the bruising primary and consolidate the party's voters in a state Clinton needs to carry in November.

The June 15 rally was postponed due to the mass shooting at an Orlando nightclub. By the time the campaign and White House got around to rescheduling, Clinton aides said the landscape had shifted — they are now far less worried about bringing along Sanders voters and more interested in using the president to rally voters in one of the most divided general election battlegrounds.