Donald Trump wins; how events unfolded during the 2016 presidential election 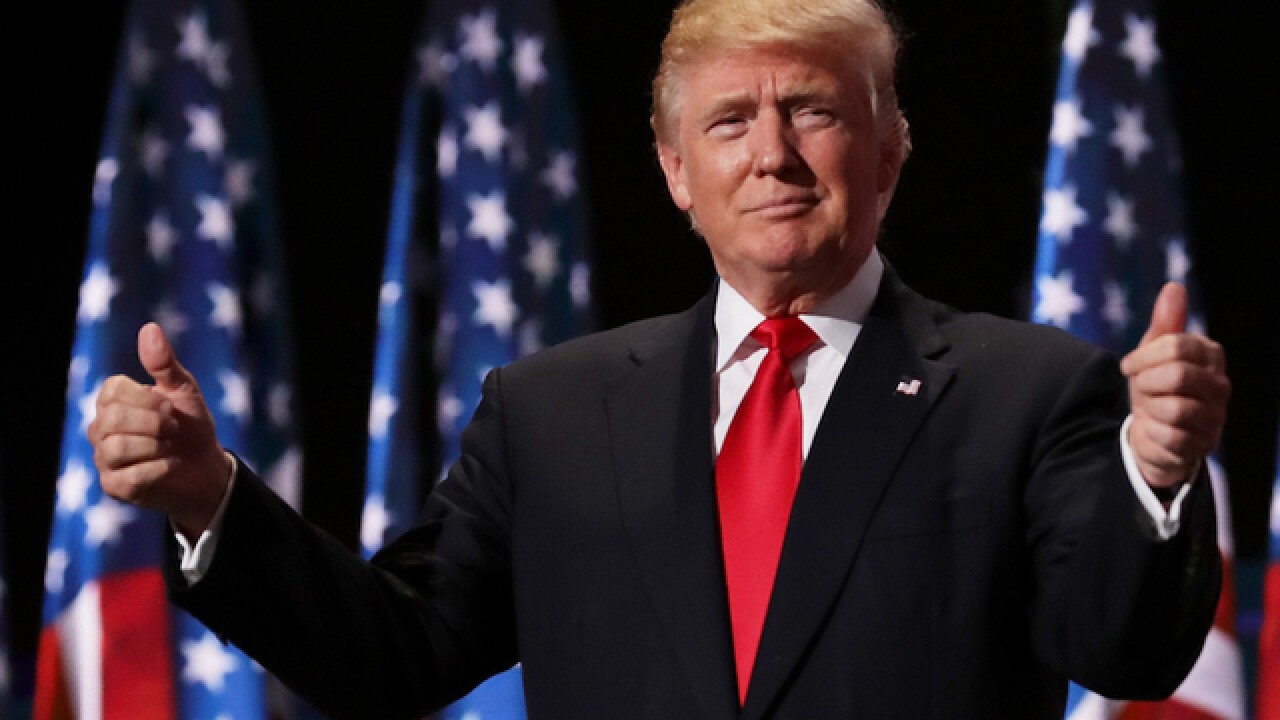 Copyright Getty Images
Chip Somodevilla
<p> Republican presidential candidate Donald Trump gives two thumbs up to the crowd during the evening session on the fourth day of the Republican National Convention on July 21, 2016 at the Quicken Loans Arena in Cleveland, Ohio. </p>

Republican Donald Trump has been elected the next President of the United States.

The time-stamped information below is coverage of the 2016 presidential election from The E.W. Scripps Company's Washington DC bureau that occurred Nov. 8-9, 2016.

It's official. Donald Trump will be the next president of the United States. https://t.co/BnzAWHQW7I #ElectionNight pic.twitter.com/OSFySS5Suc

2:30 A.M. EST UPDATE: Donald Trump wins Wisconsin and has 276 electoral votes — enough to be the next president of the United States, according to the Associated Press.

2:25 A.M. EST UPDATE: Donald Trump has arrived at his election headquarters and will speak soon.

2:10 A.M. EST UPDATE: Donald Trump takes Alaska, according to some media outlets. That puts him at 269 of the necessary 207 votes.

2 A.M. EST UPDATE: Clinton's campaign chair speaks and tells the crowd the election is too close to call and they will not have anything more to say tonight. Hillary Clinton wins Maine, though Trump gets a point there. He has 265 electoral votes.

1:55 A.M. EST UPDATE: Donald Trump is nearing victory as he inches toward the necessary 270 electoral votes needed to clinch. A campaign chair at Hillary Clinton's headquarters is expected to speak soon.

1:40 A.M. EST UPDATE: Trump wins Pennsylvania, the Associated Press reports. That puts him at 264 electoral votes to 215 for Clinton.

1:15 A.M. EST UPDATE: The presidential race is down to eight states, and Trump is leading over Clinton.

11:20 P.M. EST UPDATE: Trump is leading Nebraska, according to CNN.

10:10 P.M. EST UPDATE: Missouri picks Donald Trump, New Mexico picks Hillary Clinton. She is leading Pennsylvania, but it has not been called.

9:25 P.M. EST UPDATE: All of Florida is in except for Broward County. State still not called. Clinton takes Connecticut. Trump takes Louisiana.

8:40 P.M. EST UPDATE: Some media projecting Republicans will retain control of the House.

This is where we stand in the race as all eyes focus on Florida: pic.twitter.com/GZzZuHheQ8

Polls in 16 more states close in about 15 minutes. #Election2016 pic.twitter.com/wQw3xslQSF

Here is what the Electoral College map looks like at this moment: pic.twitter.com/eWhMjkTNkN

6:45 P.M. EST UPDATE: Maryland's election officials said a couple of voters have reported  they received ballots that were already marked . It is being called "human error" and the report states when a voter makes a mistake they sometimes hand the ballot back to poll workers. Some workers get busy and somehow give them to other voters, the AP reports.

6:30 P.M. EST UPDATE: A polling station in Azusa, California is on lockdown after a shooting in the area. Multiple people were injured . The incident occurred near a middle school. The shooter is still on the loose.

6 P.M. EST UPDATE: Polls are now closed in parts of Kentucky and Indiana. A TV station in central Florida is reporting one polling location has been evacuated due to a suspicious package.

5:30 P.M. EST UPDATE: The Arapahoe County Clerk's Office in Colorado says the voter registration system is back online. The Denver Elections Office confirms the system is running again in Denver as well, according to TheDenverChannel.com .

5:25 P.M. EST UPDATE: Media in Colorado is publishing reports of possible polling places down throughout the state. This report is still being confirmed.

4:45 P.M. EST UPDATE: The first polls are set to close in a little more than one hour, with several more set for closure at 7 p.m. EST. Earlier today, a Nevada judge dismissed a last-minute lawsuit filed by Donald Trump which alleged some polling places in the state were kept open later than they should have been.