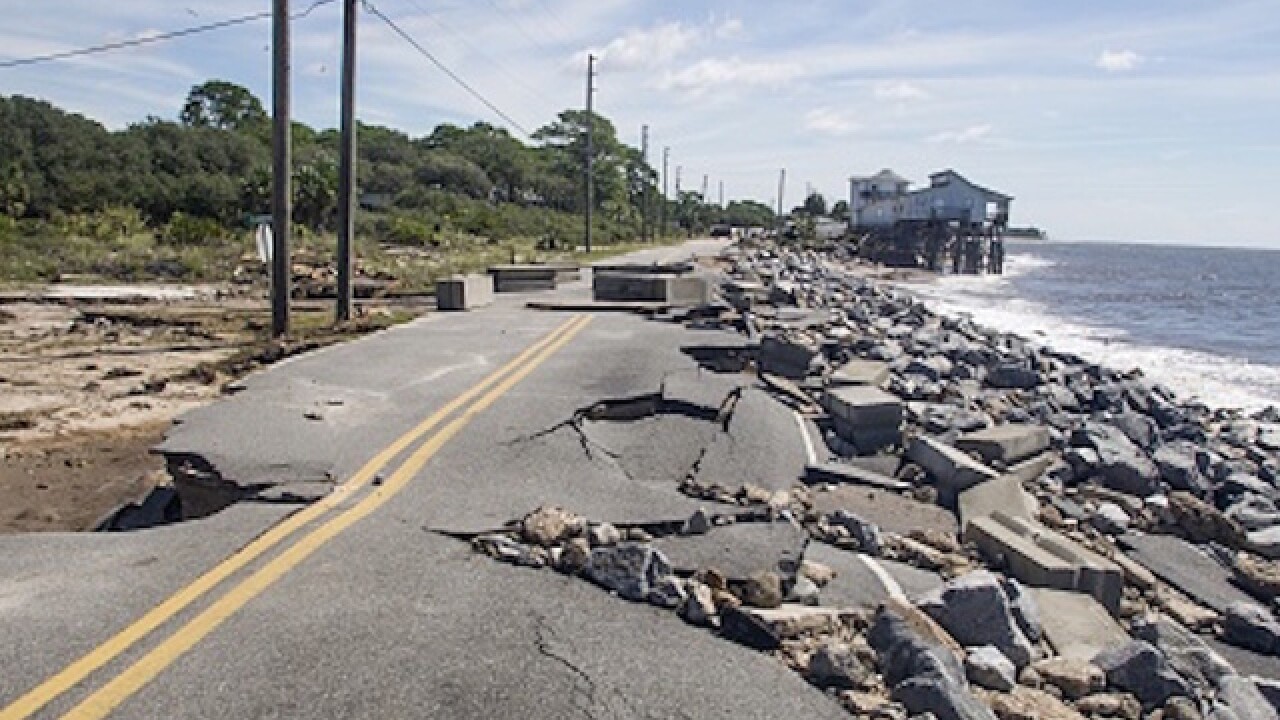 Copyright Getty Images
Mark Wallheiser
<p>ALLIGATOR POINT, FL - SEPTEMBER 02: Alligator Point road collapsed during the storm surge from Hurricane Hermine at Alligator Point, Florida on September 2, 2016. Hermine made landfall as a Category 1 hurricane but has weakened back to a tropical storm. (Photo by Mark Wallheiser/Getty Images)</p>

By: Associated Press
Posted at 6:39 AM, Sep 04, 2016
NORFOLK, Va. (AP) — Hermine spun away from the East Coast on Sunday, removing the threat of heavy rain but maintaining enough power to whip up dangerous waves and rip currents and keep beaches off-limits to disappointed swimmers and surfers during the Labor Day weekend.
As it churned hundreds of miles off shore in the Atlantic Ocean, the system picked up strength, and forecasters said it could regain hurricane force later as it travels up the coast. It was expected to stall over the water before weakening again to a tropical storm by Tuesday.

"It's just going to meander for a few days," said Dennis Feltgen of the National Hurricane Center, explaining that Hermine was unlikely to make landfall again but was positioned to batter the coast with wind and waves.
Governors all along the Eastern Seaboard announced emergency preparations. Tropical storm watches and warnings were in effect from Virginia to Massachusetts, with special concern focused on New Jersey and Delaware, where Rehoboth Beach could experience gusts up to 50 mph and life-threatening storm surges during high tide late Sunday and into Monday.
On the Virginia Beach boardwalk, the Atlantic Ocean roared with uncharacteristically large waves, drawing only a couple of surfers into the choppy white water. But hundreds, if not thousands of people, had descended onto the beach for the traditional last weekend of summer. Umbrellas and canopies dotted the sand under partly sunny skies.
Hermine failed to stop Barb and Don Willis of Buffalo, New York, from enjoying the trip they booked months ago. They even braved the Chesapeake Bay Bridge Tunnel on Saturday as the wind whipped their car and the bay rose close to the bridge's bottom.
"That was so scary," Barb Willis said. "Oh my God. My hands were white knuckles, and the water was so high. It was horrible," she said.
The couple, both in their 60s, said they knew the storm would blow over, even as friends texted their concerns.
Tropical storm-force winds were possible Monday in New Jersey. Gov. Chris Christie warned that minor to moderate flooding was still likely in coastal areas and said the storm will cause major problems, even as it tracks away from land.
"Don't be lulled by the nice weather," Christie said, referring to the bright sunny skies along the Jersey Shore on Sunday. "Don't think that nothing is going to happen, because something is going to happen."
New York City planned to close its beaches Monday because of rip currents, and the ban could extend into Tuesday, depending on weather conditions, officials said.
Long Island authorities urged people to evacuate the summer getaway known as Fire Island to avoid any storm surge and coastal flooding. Emergency officials warned that anyone who stays will not be able to leave after ferries shut down Sunday evening.
Hermine (her-MEEN) rose up over the Gulf of Mexico and hit Florida on Friday as a Category 1 hurricane before weakening to a tropical storm across Georgia.
It has caused two deaths, inflicted widespread property damage and knocked out power to hundreds of thousands of people from Florida to Virginia.
The Anclote River northwest of Tampa was forecast to go well into major flood stage on Sunday afternoon. Emergency managers issued mandatory evacuations for some low-lying mobile home parks and apartment buildings.
At 8 p.m. Sunday, Hermine's top sustained winds were steady at 70 mph (110 kph) as it moved east-northeast at 5 mph (7 kph). The storm was centered about 370 miles (595 kilometers) east of Ocean City, Maryland.
Since sea levels have risen up to a foot due to global warming, the storm surges pushed by Hermine could be even more damaging, climate scientists say.
Michael Mann at Pennsylvania State University noted that this century's 1-foot sea-level rise in New York City meant 25 more square miles flooded during Superstorm Sandy, causing billions in additional damage.
"We are already experiencing more and more flooding due to climate change in every storm," said Michael Oppenheimer, a geosciences professor at Princeton University. "And it's only the beginning."
On Saturday, high winds tipped over an 18-wheeler, killing its driver and shutting down the U.S. 64 bridge in North Carolina's Outer Banks.
Earlier in Florida, a homeless man died from a falling tree.
Todd Solomon, who lives in an area of Virginia Beach that often floods, said water crept up to the foundations of some homes. But he said he did not know of any buildings that were actually flooded.
"If you weren't in the flood-prone area, it was like a normal day," he said. "And if your power was out, you kind of bounced around to find a restaurant or grocery store that still had power."
On Sunday afternoon, he said, a few homes still lacked power. But most people were cleaning up trees and branches felled by the storm.
Copyright 2016 The Associated Press. All rights reserved. This material may not be published, broadcast, rewritten or redistributed.