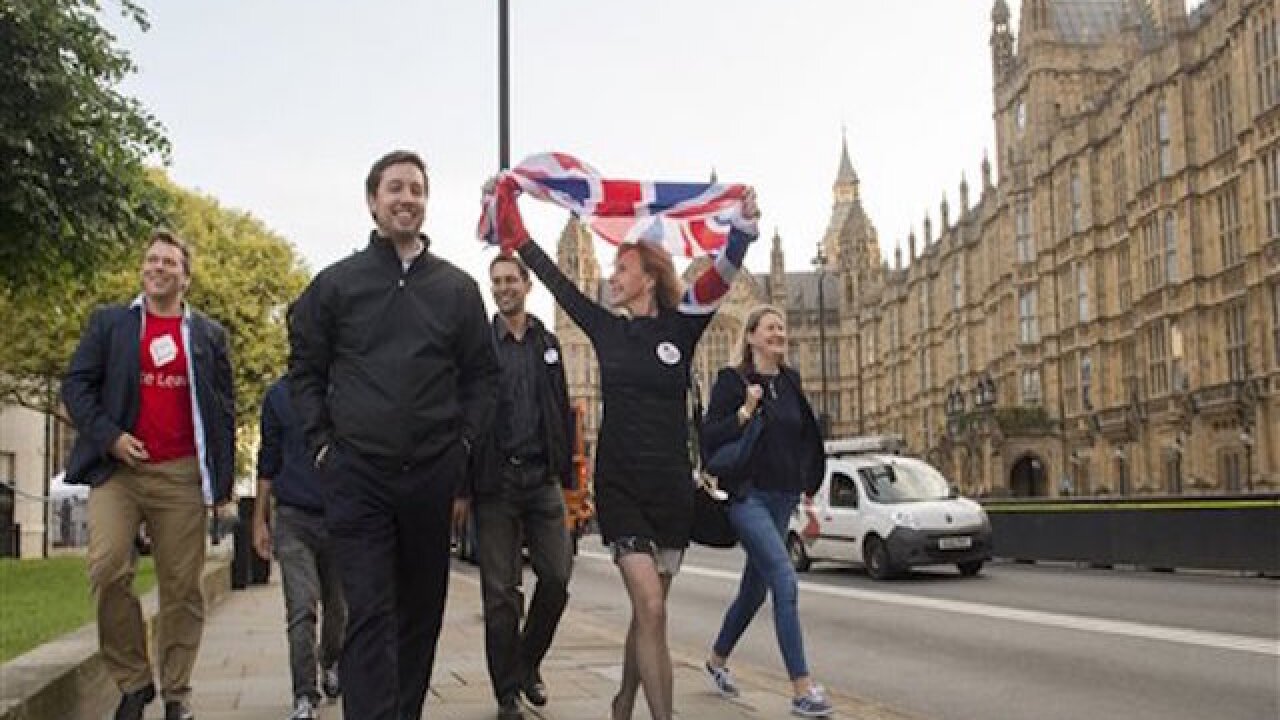 Copyright Associated Press
Anthony Devlin
<p>Vote Leave supporters celebrate as they walk through Parliament Square in London, Friday, June 24, 2016. Britain entered uncharted waters Friday after the country voted in a referendum to leave the European Union, according to a projection by all main U.K. broadcasters. (Anthony Devlin/PA via AP)</p>

LONDON (AP) — Britons woke Friday to a rush of emotions, from delight to alarm and outright confusion, after a historic referendum that upends their relationship with Europe.

Some worried about their mortgages and market turmoil while others felt vindicated by a vote they said restores British democracy and independence.

"Absolutely wonderful. Best news ever," said Allen Laurence, 65, a vendor at London's Billingsgate market. "We want England — or Great Britain — to come back how it was years ago."

Other vendors at the market were equally pleased.

"I think it's just great we've got our independence back," said Mathew Heart, 46.

Commuters at the main train station in the well-heeled southwest London borough of Richmond, which voted overwhelmingly to remain, expressed anger and frustration at the vote.

"I'm quite shocked really," said Martin Laidler. "My 9-year-old daughter asked me to vote to remain, so I was voting for her future."

Olivia Sangster-Bullers, 24, called the result "absolutely disgusting" and she worried about the economic impact.

"I've just seen that the pound's crashed so good luck to all of us, I say, especially those trying to build a future with our children," she said.

Morning commuters were glued to their phones or — unusually for London — talking to each other about the outcome. Some shook their heads; others embraced.

Peter Walker, 50, said he felt the referendum had been an outlet for people who were afraid, but that it likely wouldn't solve the problems they face.

"I think it's a short-term solution," he said on his way to catch a bus to work.

Beatrice Rumsey, a 67-year-old health worker originally from northwestern England, said the referendum gave a voice to "ordinary people" who didn't fall for what she called the "scare tactics" of the "remain" campaign.

"Well, good, if house prices go down," she said, while eating breakfast on a bench in Twickenham, southwest London, before starting work.

Europeans living in London pondered how the result would affect them.

"I feel sad," said Kelly Krieg, a 27-year-old German living in London for five years. "It's not about just a country leaving EU; it's more about every individual having to fight to live in this country legally. I don't think it's fair."

Some Britons stressed the historic aspect of the vote.

"I think it's a vindication of 1,000 years of British democracy," said Jonathan Campbell James, 62. "From Magna Carta all the way through to now we've had a slow evolution of democracy and this vote has vindicated the maturity and depth of the democracy in our country."

In Romfort Market in the London borough of Havering, market stall trader Karen Webb said she believed Britain's most famous prime minister would have been pleased with the outcome.

"Winston Churchill would be proud of us," she said. "He'll be up there now looking down at us: 'Well done Great Britain, well done.'"