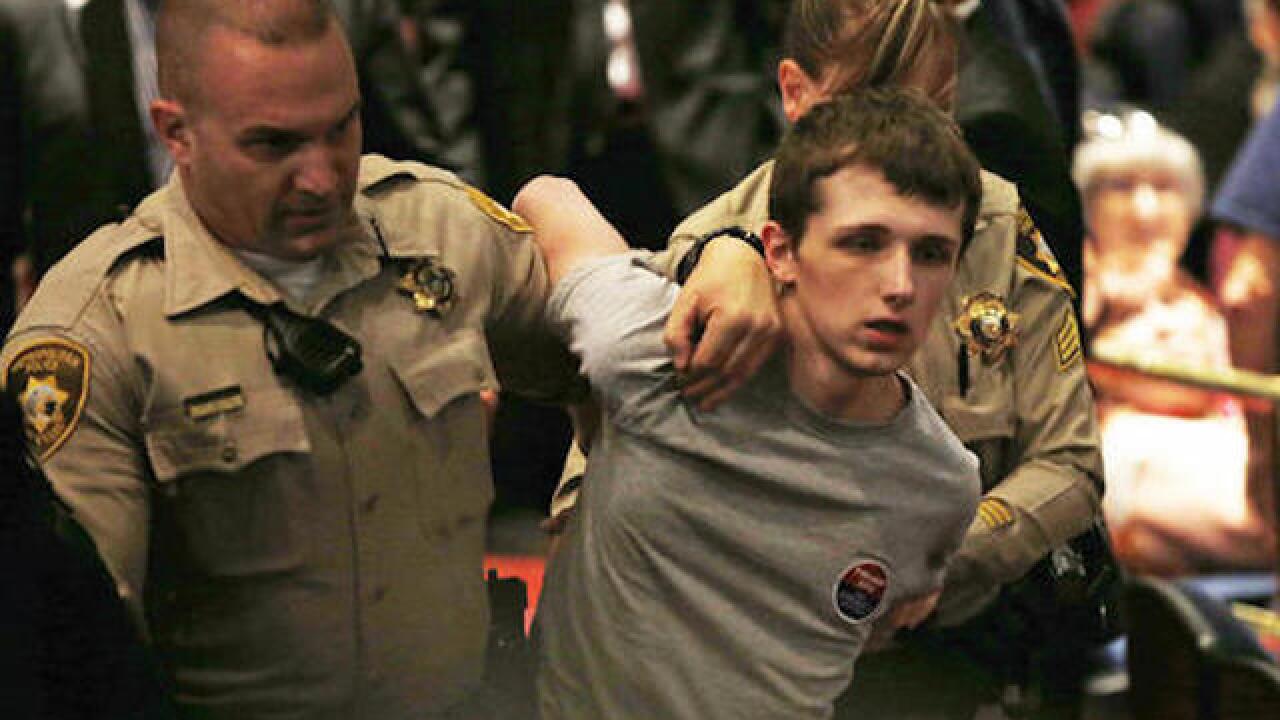 John Locher
<p>FILE - In this June 18, 2016, photo, police remove Michael Sandford as Republican presidential candidate Donald Trump speaks at the Treasure Island hotel and casino in Las Vegas. The mother of Standford who is accused of attempting to shoot Donald Trump told British television he will plead guilty to lesser charges in a U.S. court. Lynne Sandford, the mother of Michael Sandford, told the station her son has signed a plea agreement in advance of a Nevada court appearance Tuesday, Sept. 13. (AP Photo/John Locher, File)</p>

LAS VEGAS (AP) — A British man pleaded guilty Tuesday to federal charges that could get him about two years in a U.S. prison and deported for trying to grab a police officer's gun to shoot Donald Trump at a June campaign rally in Las Vegas.

Michael Steven Sandford entered the pleas to being an illegal alien in possession of a firearm and disrupting an official function.

"I tried to take a gun from a policeman to shoot someone with, and I'm pleading guilty," Sandford told the judge.

Sandford could have faced up to 20 years in a U.S. prison if he had been convicted at trial of both charges.

Sandford, 20, was arrested June 18 after grabbing for the gun in a 1.500-seat venue at Treasure Island hotel-casino. Sandford didn't get the gun, and no shots were fired before he was arrested.

Sanford entered his pleas after his mother, Lynne Sandford, and a lawyer arrived from London and met with him in custody last week.

"Michael was not in control at the time of the events and needs help," the attorney said in an email to The Associated Press before the plea in U.S. District Court in Las Vegas. "He is desperate to return to the U.K. to be near his family as he has no ties with the U.S.A."

Sentencing guidelines call for 18 to 27 months in prison for the offenses, after credit for time served, accepting responsibility for the crime and avoiding trial, which had been set to start Oct. 3. Under the plea deal, Sandford won't be able to appeal.

Court documents say Sandford acknowledged asking the police officer at the event if he could get Trump's autograph then grabbing with both hands for the officer's 9mm handgun.

It wasn't clear if Trump recognized a threat before officers escorted Sandford out of the auditorium.

Sandford later told a federal agent that he drove from California to Las Vegas with a plan to kill Trump, and that he rented a 9mm pistol and fired 20 shots at a paper target at a Las Vegas gun range the day before Trump's appearance, according to court documents.

Sandford told the agent it was the first time he had ever fired a gun.

He also said he expected he would be killed during the assassination attempt, but that if he wasn't, he would make another attempt on Trump's life at a rally in Phoenix, court documents state.

The plea agreement acknowledges Sandford had been in the U.S. illegally for almost 10 months at the time of his arrest.

As a result of his plea, "It is almost certain that he will be permanently removed ... and will not be able to return to the United States at any time in the future," the document said.