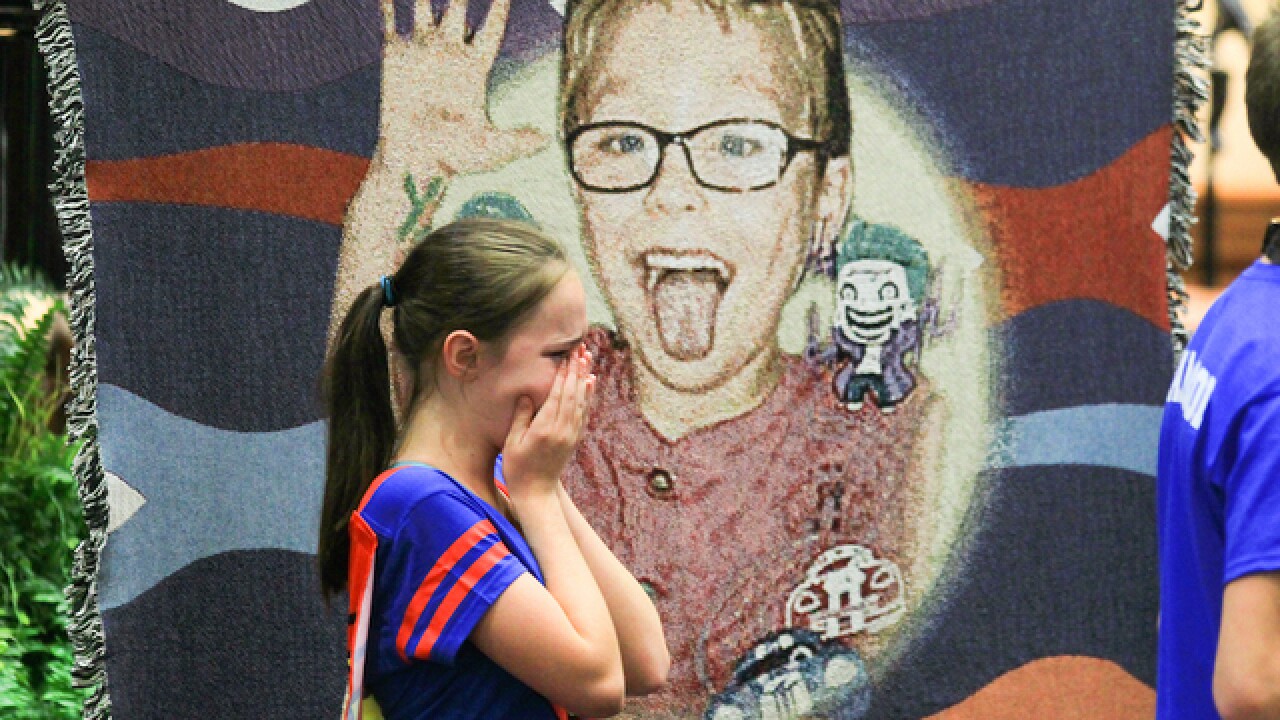 Ken Ruinard
<p>Starr Henderson, 12, of Belton, cries after seeing her nephew Jacob Hall during a wake service at Oakdale Baptist Church in Townville, S.C., Wednesday, Oct. 4, 2016. Jacob, a classmate and a teacher were shot last Wednesday as they left for recess. Authorities say the suspect, a 14-year-old boy, had shot his father to death before driving to Townville Elementary. The other student and teacher were treated and released from a hospital that day.</p>

TOWNVILLE, S.C. (AP) — A 6-year-old boy who died after a teen gunman opened fire at a South Carolina elementary school will be remembered Wednesday as a superhero.

Jacob Hall's family has encouraged people to dress as superheroes to celebrate what he enjoyed.

"We want to honor Jacob, celebrate Jacob, in a way he would love," his great-aunt, Rebecca Hunnicutt, told the Anderson Independent-Mail .

His funeral comes a week after authorities say a 14-year-old boy killed his own father before driving a pickup to Townville Elementary School and crashing into a playground fence. Jacob, a classmate and a first-grade teacher were struck by bullets as they left for recess. That student and teacher were treated and released from a hospital later that day.

A bullet struck Jacob in a main artery in his thigh, and he was airlifted to a Greenville hospital, where he died Saturday.

Supporters released hundreds of balloons Sunday in his honor following a prayer service at Oakdale Baptist Church, where the funeral will be held in this small rural town near the Georgia border.

People packed the church Tuesday evening for Jacob's visitation, many of them wearing superhero costumes and T-shirts. At the front, large posters showed Jacob as Superman and being held by Jesus. Teenage Mutant Ninja Turtles stickers decorated his blue casket, and "God's Super Hero" was written inside. Superheroes in his floral spray included the Ninja turtles and Captain America. He was dressed as Batman, another favorite. Life-size balloons of superheroes around the church included Batman.

Family members said Jacob told them he was out saving Townville as others slept.

But the district's other five schools will honor Jacob by participating in Superhero Day. All employees and students are invited to come to school in costume, and any who want to attend the 11 a.m. funeral are excused, said District Superintendent Joanne Avery.

Townville teachers will take a bus to the funeral and wear superhero capes, she said.

A moment of silence will be observed at 1:42 p.m. district-wide, marking one week since the shooting.

According to a Facebook page created for Superhero Day, schools across the state planned to participate. But schools in central and coastal South Carolina were closed for the rest of the week because of the approach of Hurricane Matthew.

The 14-year-old faces two murder charges in the deaths of his father and Jacob. He also is charged with three counts of attempted murder, as well as five counts of possession of a weapon during the commission of a violent crime.

Local media report a replica of the Batmobile will be at Jacob's funeral.

John Buckland, the founder of Heroes 4 Higher in West Virginia, has posted on Facebook as he drives south in what he calls the Hope-Mobile.