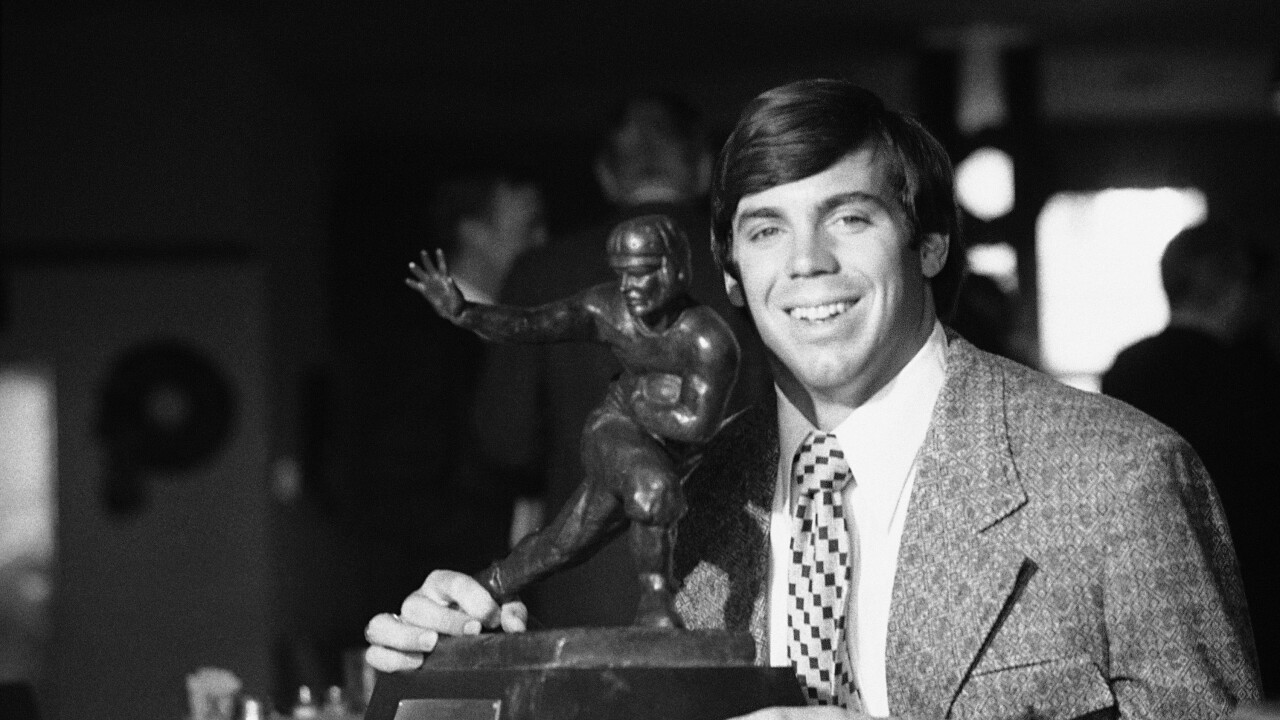 Pat Sullivan , the former Auburn University quarterback who won the school's first Heisman Trophy in 1971 and went on to play in the NFL, has died. He was 69.

Sullivan's family, in a statement Sunday, said he died at home, surrounded by loved ones.

"He was diagnosed with cancer in 2003 and fought a long and difficult battle as a result of his treatments. The family is appreciative of everyone's outpouring of love and support," the statement said.

Sullivan is one of three Auburn Tigers to win the Heisman , the annual award given to college football's most outstanding player. Quarterback Cam Newto n won the award in 2010 and running back Bo Jackson received the honor in 1985. In 2012, statues of Sullivan, Jackson and Newton were unveiled in front Jordan-Hare Stadium , Auburn's home stadium.

Sullivan was a two-time All-American and named the SEC Player of the Year as a junior and senior.

"He was a friend, mentor and a man of great character, who was beloved by many generations of Auburn fans. Pat Sullivan is, and always will be, the definition of an Auburn Man," Malzahn said.

Born in Birmingham, Sullivan attended Auburn on an athletic scholarship. He took over the starting quarterback job as a sophomore in 1969 and threw for nearly 1,700 yards and 16 touchdowns, according to Auburn.

The next season, he led the nation with 2,856 yards of total offense and led Auburn to a 9-2 record and a top 10 ranking.

But 1971 was perhaps the most memorable year for Sullivan, highlighted by his performance against longtime rival Georgia.

Auburn was ranked No. 6 and Georgia No. 7 when the two teams met that November, according to the AuburnTigers.com . Never before in the history of the Southeastern Conference had undefeated teams met so late in the season, AuburnTigers.com said.

Sullivan threw for 248 yards and four touchdowns to beat Georgia. A few weeks, later he won the Heisman.

Sullivan and Beasley's uniform numbers, 7 and 88, along with Jackson's No. 34, are the only three Auburn jerseys to be retired.

"He was a kind and humble gentleman, who was an Auburn legend," Auburn Director of Athletics Allen Greene said in a statement.

Sullivan was selected by the Atlanta Falcons in the second round of the 1972 draft and played for the Falcons until 1975. He also played one season with the Washington Redskins and the San Francisco 49ers, the university said.

After football, Sullivan worked as a radio color commentator for Auburn, and as a quarterbacks coach for team. He served as the head coach of Texas Christian University from 1992 to 1997 and later Samford University .

Sullivan step down as Samford's head coach in 2014 after eight seasons to move into another role at the university, the university said .

Sullivan is survived by his wife, Jean; his children, Kim, Kelly and Patrick; and eight grandchildren.