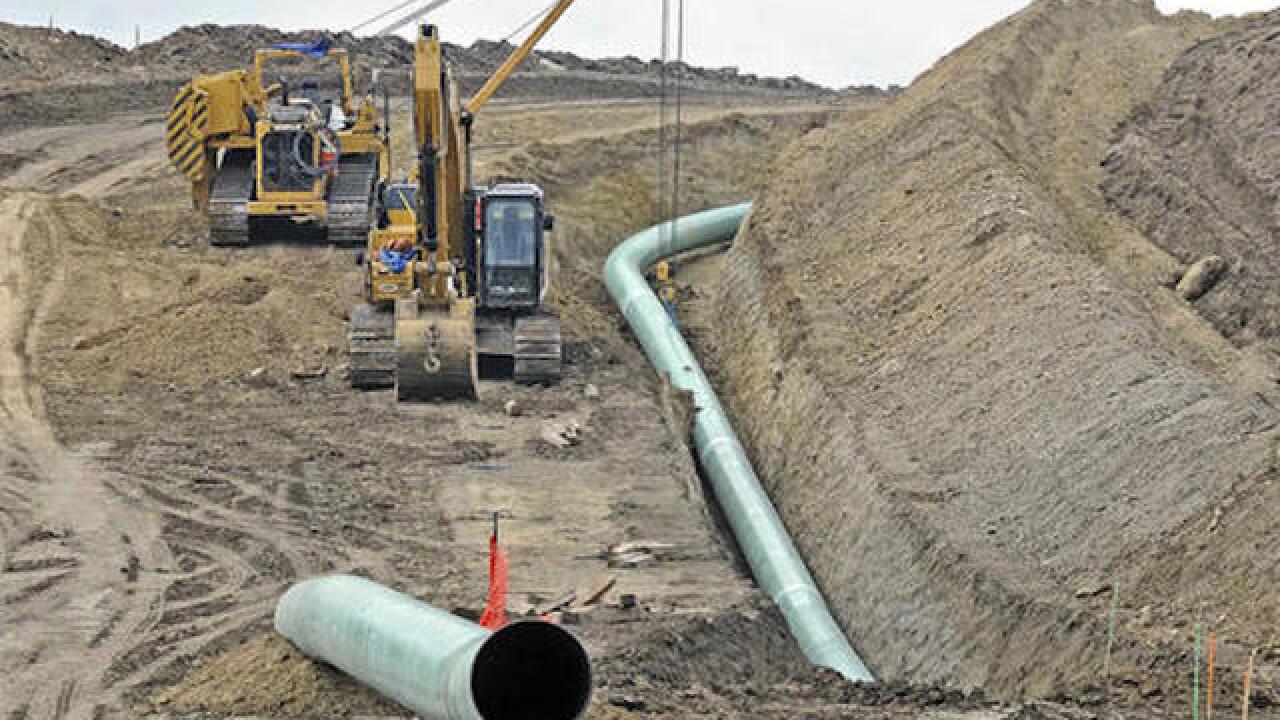 Copyright Associated Press
Tom Stromme
<p>FILE - In this Oct. 5, 2016, file photo, heavy equipment is seen at a site where sections of the Dakota Access Pipeline were being buried near the town of St. Anthony in Morton County, N.D. The Army has notified Congress Tuesday, Feb. 7, 2017, that it will allow the $3.8 billion Dakota Access pipeline to cross under a Missouri River reservoir in North Dakota, completing the four-state project to move North Dakota oil to Illinois. The Army intends to allow the crossing under Lake Oahe as early as Wednesday, Feb. 8. The crossing is the final big chunk of work on the pipeline. </p>

(CNN) -- The US Army Corps of Engineers will grant an easement in North Dakota for the controversial Dakota Access Pipeline, allowing the project to move toward completion despite the protests of Native Americans and environmentalists.

Just a few weeks ago, President Donald Trump signed executive actions to advance approval of this pipeline and others, casting aside efforts by President Barack Obama's administration to block construction.

That order directed "the acting secretary of the Army to expeditiously review requests for approvals to construct and operate the Dakota Access Pipeline in compliance with the law."

Acting Secretary of the Army Robert Speer's moves to grant the easement and stop the preparation of an environmental impact statement were anticipated.

"The decision was made based on a sufficient amount of information already available which supported approval to grant the easement request," the Army said.

Speer called granting the easement a "final step" in meeting the tasks of the President's executive action.

The Standing Rock Sioux Tribe, which has long opposed the project near its home, promised a legal fight. The tribe said the Obama administration had determined other locations for the pipeline should be looked into by the Army.

"Trump's reversal of (President Obama's) decision continues a historic pattern of broken promises to Indian tribes and a violation of treaty rights," Earthjustice attorney Jan Hasselman, who is representing the tribe, said. "Trump and his administration will be held accountable in court."

The Standing Rock Sioux said it will argue in court that the environmental impact statement process was wrongfully terminated.

The tribe has been concerned that digging the pipeline under Lake Oahe -- a section of the Missouri River in North Dakota -- would affect the area's drinking water, as well as the supply for 17 million people living downstream.

The proposed underground route at Lake Oahe is half a mile upstream from the tribe's reservation.

The tribe and its allies have protested in North Dakota for months, blocking the path of the pipeline during peaceful demonstrations and clashes that have sometimes turned violent.

Greenpeace said the President was looking out for the rich.

"We are less than two weeks into this administration, and already Trump has put on full display a blatant disregard for Indigenous sovereignty, public health, and public outcry," the environmental organization said. "This decision to smash through the (environmental impact statement) process is nothing but a reward to Trump's corporate, oil industry cronies."

Dakota Access and pipeline supporters say the $3.7 billion pipeline project would be an economic boon.

The developer estimates the pipeline would bring $156 million in sales and income taxes to state and local governments and will add 8,000 to 12,000 construction jobs.

The pipeline will stretch 1,172 miles through four states -- from North Dakota into South Dakota, winding through Iowa and ending in southern Illinois -- moving 470,000 barrels of crude oil a day across the Midwest. It is completed, except for the contested portion under Lake Oahe.

Like Dakota Access, the Keystone XL Pipeline had been the subject of environmental concern from activists, residents and indigenous tribes who worried that the pipeline would pollute as many as 2,500 aquifers.

But pipeline supporters touted the jobs it would create and other economic benefits.

The $8 billion Keystone XL Pipeline was proposed to stretch nearly 1,200 miles across six states, shuttling carbon-heavy petroleum from Canada to the Gulf Coast.

In November 2015, Obama nixed the proposed pipeline, virtually ending the fight over the project that had gone on for much of his presidency.

But Trump's executive actions on both pipelines signal how his administration will take a different approach to energy and environmental issues.