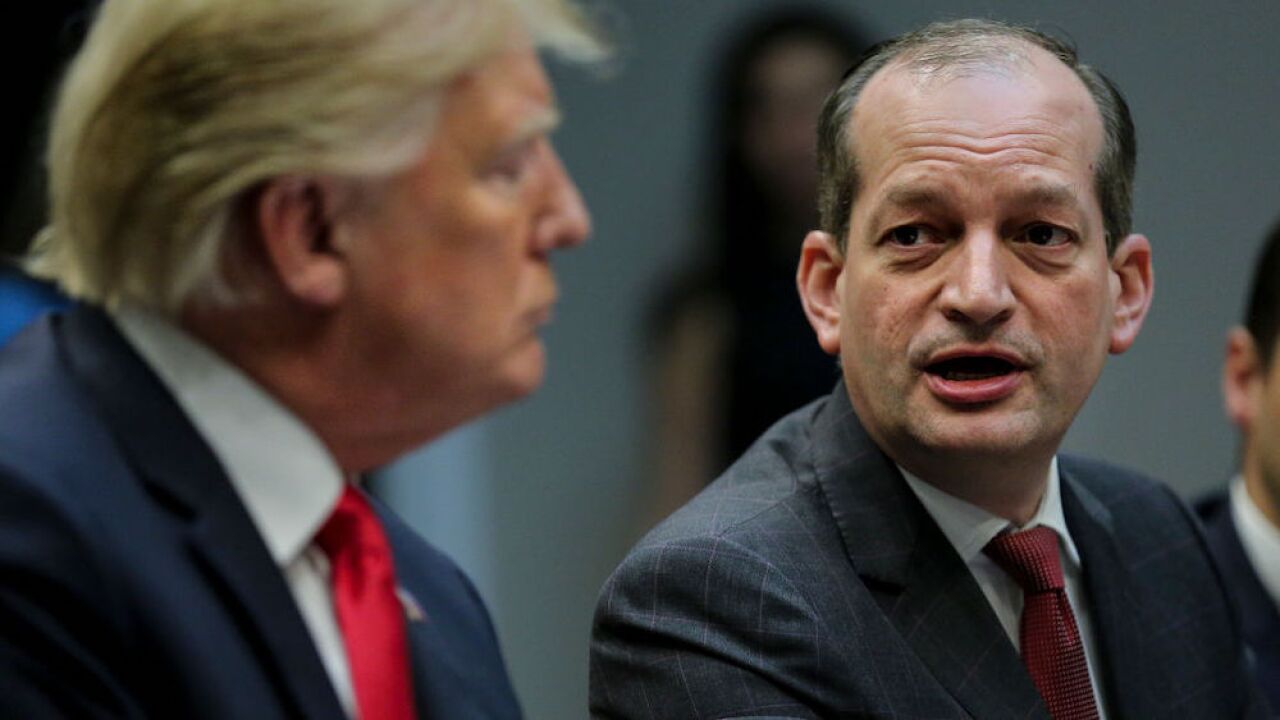 President Donald Trump announced Friday that Labor Secretary Alex Acosta has resigned, a move that comes after furor over a plea deal with Jeffrey Epstein.

Acosta has been under renewed scrutiny over his previous role as the US attorney in Miami, during which he negotiated the 2008 plea deal with Epstein. Epstein, a well-connected multi-millionaire, avoided a federal trial at the time and served only 13 months in prison for state prostitution charges over his involvement with underage girls . A Miami Herald investigation published last November described the plea deal, negotiated by Acosta, as the "deal of a lifetime."

Acosta, standing next to Trump outside the White House before the President departed for a trip, said he resigned to remove himself as a distraction.

"I do not think it is right and fair to this administration's Labor Department to have Epstein as the focus rather than the incredible economy that we have today," Acosta said Friday. "And so I called the President this morning. I told him that I thought the right thing was to step aside."

Trump publicly praised Acosta and said he would have been willing to have him remain.

"Thought he did a fantastic job. He explained it. He made a deal people were happy with ... now they're not," Trump said from the lawn. "In so many ways I hate what he's saying now cause we're gonna miss him."

But privately, Trump was stewing over Acosta's fate, according to a senior White House official, as he and aides worried about the steady stream of revelations in the Epstein case.

"There would just continue to be disclosures," the official said. "There would be questions in this town and on the trail."

The official emphasized that Acosta was not popular within the White House to begin with, given the grumblings over his perceived lack of enthusiasm for the President's deregulatory agenda.

"Your well of support is not going to be deep if you're not going to support the President's agenda," the official added.

Federal prosecutors in New York unsealed a new criminal indictment Monday charging Epstein with having operated a sex trafficking ring in which he sexually abused dozens of underage girls, part of the allegations that have circulated around the politically connected businessman for years. A "vast trove" of lewd photographs of young-looking women or girls was also confiscated from Epstein's Manhattan home, prosecutors said in a court filing.

Epstein pleaded not guilty to the charges in Manhattan federal court on Monday afternoon.

Acosta, in a tweet on Tuesday, said: "The crimes committed by Epstein are horrific, and I am pleased that NY prosecutors are moving forward with a case based on new evidence."

The Justice Department inspector general told lawmakers in January that he is unable to investigate the circumstances surrounding the 2008 plea deal because of statutory limitations.

The White House indicated in March that they were reviewing Acosta's role in the case and on Tuesday Trump praised Acosta but indicated that the White House would continue to evaluate the situation.

"I can tell you that for two and a half years he's been just an excellent secretary of labor, he's done a fantastic job. Now part of it is our economy is so good, our unemployment numbers are at record lows, so many good things are happening, but the fact is he's been a very good secretary of labor," he told reporters.

Trump said Tuesday that "a lot" of people were involved in the 2008 case in addition to Acosta.

Work at the department

Acosta, the only Hispanic member of the Trump Cabinet, used his two-and-a-half year tenure to lead the administration's efforts on apprenticeships, job training and second-chance hiring. He was also at the helm of the Labor Department when the agency scaled back an Obama-era overtime rule that had originally expanded overtime pay.

Acosta's work aligned with the President's priorities while serving as secretary by reducing unemployment, as well as implementing the President's executive order that pushed private sector investment toward apprenticeships and work training.

Prior to joining the Trump administration, Acosta served in roles at the National Labor Relations Board under then-President George W. Bush as well as assistant attorney general for the civil rights division at the Justice Department.

He was also previously the dean of the Florida International University School of Law.

Acosta was selected for the Labor position following an unsuccessful nomination for Trump's first pick, Andy Puzder, who withdrew his nomination amid scandal.

Puzder, the CEO of the company that owns the Hardee's and Carl's Jr. fast food chains, faced fierce opposition mostly from Democrats in part related to his position on labor issues as well as the fact that he employed an undocumented immigrant housekeeper.