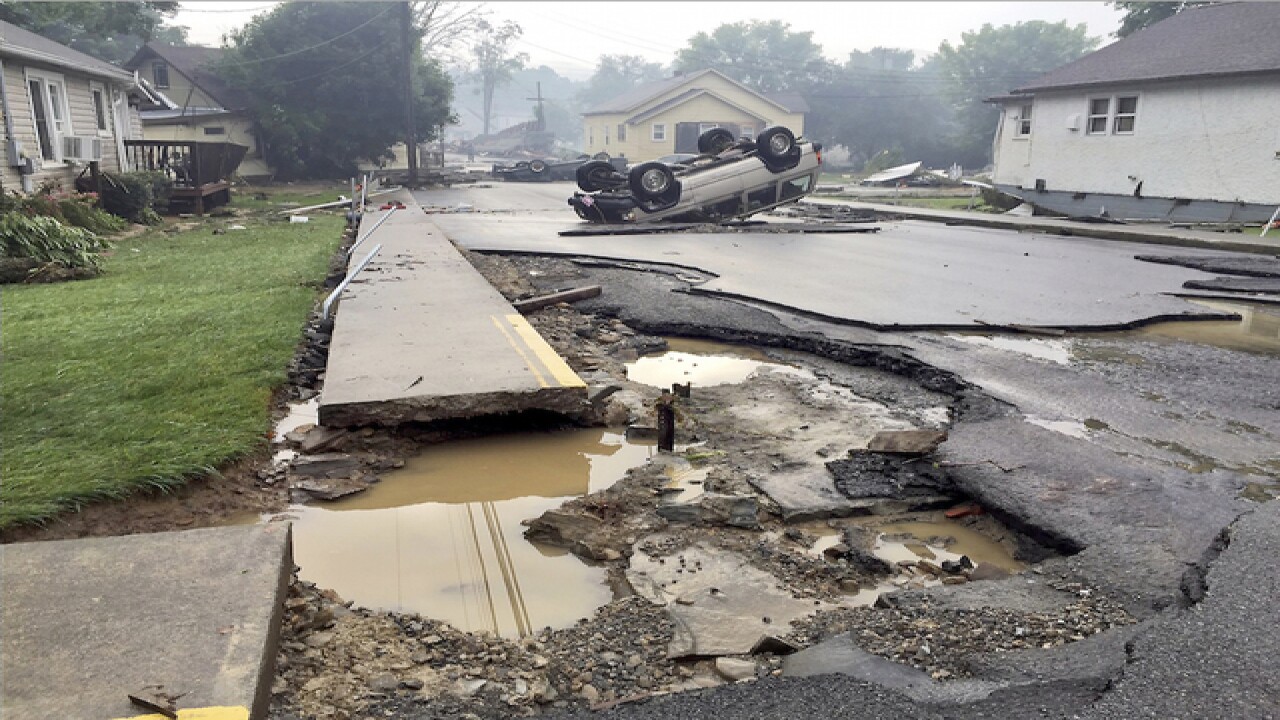 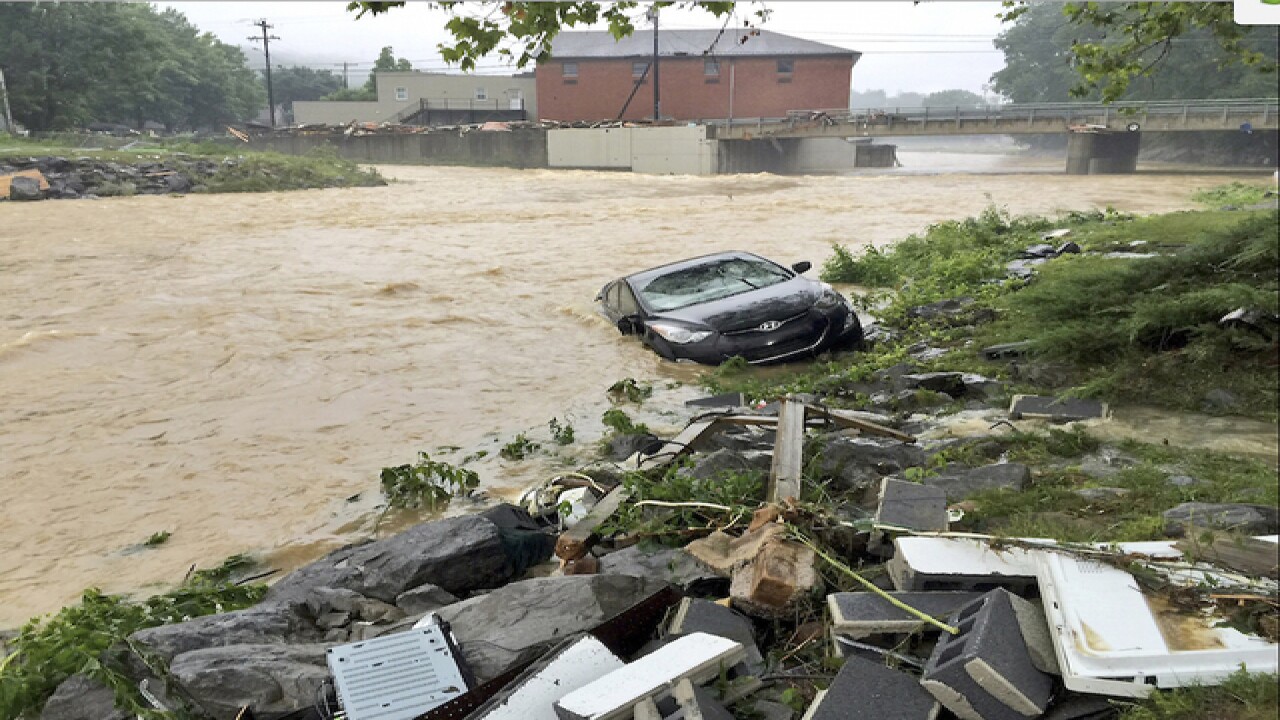 CHARLESTON, W.Va. (AP) — As a deluge swamped southeast West Virginia — a disaster that killed at least 20 people — Ronnie Scott's wife called him and told him their house was filling up with water. She fled to the attic with two dogs and a cat and waited. She smelled natural gas.

Then, the house blew up.

Belinda Scott was able to break a vent and get out onto a porch, then make it onto a tree, which she clung to for hours before being rescued by state police, Ronnie Scott told The Associated Press on Friday. His wife was in the hospital with burns on 67 percent of her body. The pets did not make it out alive.

"My wife was out there four and a half hours hanging in a tree with a house burning right beside her, flood waters running all around her," said Scott, who was not at the White Sulphur Springs home when the waters rose.

Early reports indicate about 9 inches of rain damaged or destroyed more than 100 homes and knocked out power to tens of thousands of others, Gov. Earl Ray Tomblin said.

About 500 people were stranded overnight in a shopping center when a bridge washed out, and dozens of other people had to be plucked off rooftops or rescued from their cars.

"Our focus remains on search and rescue," the governor said. He added: "It's been a long 24 hours and the next 24 hours may not be much easier."

Greenbrier County Sheriff Jan Cahill described "complete chaos" in his county, one of the hardest hit.

"Roads destroyed, bridges out, homes burned down, washed off foundations," he said. "Multiple sections of highway just missing. Pavement just peeled off like a banana. I've never seen anything like that."

In the towns of Rainelle and White Sulphur Springs, rescue crews went door to door to check on residents, a painstaking task that could stretch into the weekend. Once a residence was checked, a red or orange "X'' was marked on the home.

Currently 200 National Guardsmen were assisting in eight counties, helping local crews with swift water rescues, search and extraction efforts and health and welfare checks. The governor declared a state of emergency in 44 of 54 counties and authorized up to 500 soldiers to assist.

The governor said he had planned to fly around the hard-hit areas, but wasn't able to because all state aircraft were being used for rescues.

Eric Blackshire was one of the stranded at Crossings Mall, a mix of restaurants, stores and a hotel in Elkview, which is about 15 miles northeast of Charleston. Some had to sleep in their cars or at businesses overnight. Blackshire opted for a hotel room.

"It was kind of like a hurricane party. I guess you could call it a flood party. There were lots of beers being drank last night," he told The Associated Press.

He was able to get to safety Friday when Pinch Volunteer Fire Department firefighters used a rope to guide people down a hillside. Crews were working to build a gravel road on the backside of the shopping plaza.

An area near the West Virginia-Virginia border received at least 9 inches of rain while other parts of the state had 3 to 5 inches, National Weather Service hydrologist John Sikora said. While most of the rain had tapered off Friday, there were still scattered showers, thunderstorms and river flood warnings.

Some of the heaviest rainfall was in Greenbrier County, where The Greenbrier luxury resort and golf course is nestled in the mountains. The course, overrun by floodwaters, is scheduled to host a PGA tour event from July 4-10.

"It's like nothing I've seen," owner Jim Justice, a Democratic candidate for governor, said in a statement. "But our focus right now isn't on the property, golf course or anything else. We're praying for the people and doing everything we can to get them the help they need."

Professional golfer Bubba Watson was apparently visiting the resort and tweeted photos of entire holes underwater: "Prayers for @The_Greenbrier & surrounding areas. We are without power & it's still raining. Never seen this much rain! #WestVirginiaBeSafe."

The Federal Emergency Management Agency said it was sending teams to help with damage assessments.

The governor's office said 14 deaths were confirmed by the state medical examiner. Local sheriffs and rescue workers across the state confirmed the others not yet included in the state's official tally.

One of the dead included a 4-year-old boy who was found about a quarter mile from where he fell into a creek, which usually runs about ankle deep but rose to about 6 feet deep when Jackson County was pounded with 9 inches of rain in 16 hours.

Bob Bibbee with the Ravenswood Fire Department said the boy was outside with his grandfather, who jumped in after him. Neighbors, alerted by the sound of the family's screams, tried to help save the boy but were also unable to reach him.

Local officials in Ohio County said the death of an 8-year-old boy, Emanual "Manny" Williams, who fell into Big Wheeling Creek on Thursday, was not due to flooding but was an accidental drowning. The area around Wheeling had no flooding and no severe weather, said Wheeling Police Sgt. William Nolan. The death was among those counted by the state medical examiner, the governor's office said.

In White Sulphur Springs, Scott said out of 10 houses on his dead end street, only three were left standing, and they were badly damaged. His son, daughter in law, two grandkids and a nephew were two houses down and trapped in the attic during the storm, but they were also rescued.

"Everything that I've lost can be replaced," he said. "I've got my kids and that's the main thing."