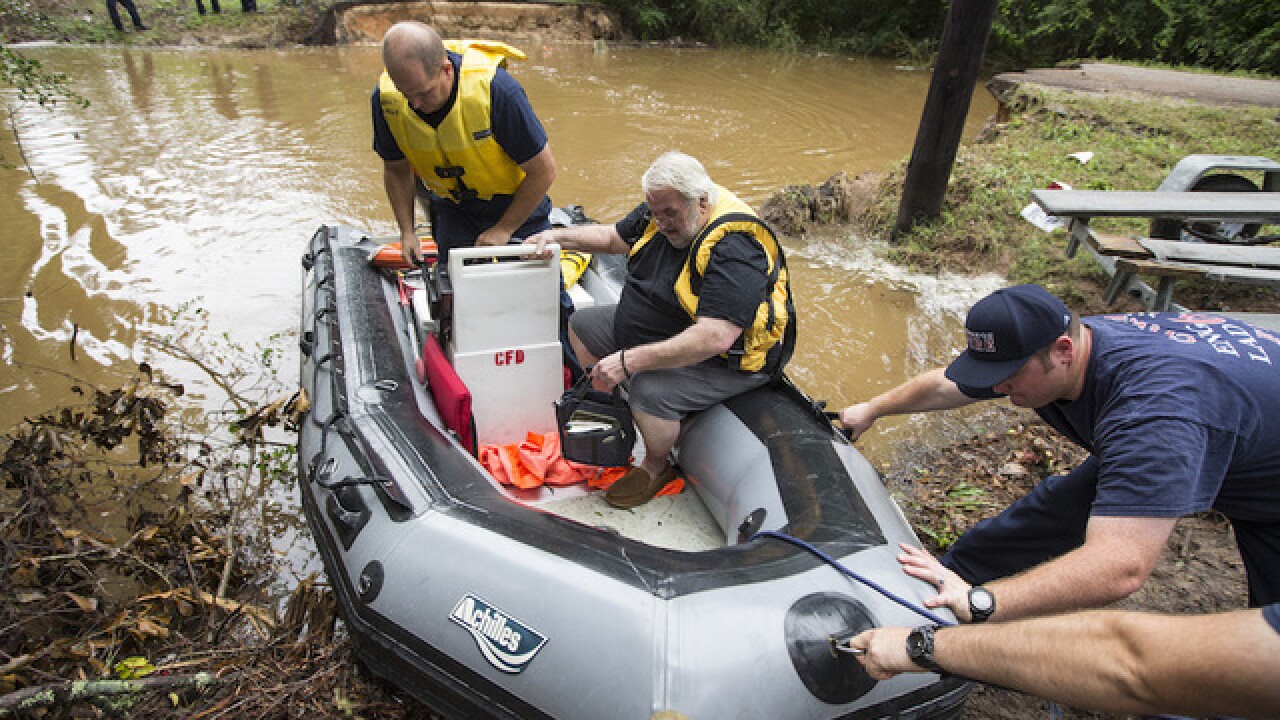 Brett Coomer
<p>Conroe firefighters evacuate Jim Treadway via boat after Treadway was stranded when Pecan Bend Road was washed out near the San Jacinto River on Friday, May 27, 2016, in Conroe, Texas. ( Brett Coomer/Houston Chronicle via AP) </p>

Central Texas authorities spotted a body during an aerial search Sunday, bringing the death toll from flooding the state to five.

Torrential rains caused heavy flash flooding in some parts of the U.S. over the last few days, and led to numerous evacuations in southeast Texas, including two prisons. But the threat of severe weather has lessened over the long Memorial Day holiday for many places, though Tropical Depression Bonnie continued to bring rain and wind to North and South Carolina.

Near Austin, a crew aboard a county STAR Flight helicopter found a body Sunday on the north end of a retention pond near the Circuit of the Americas auto racing track, which is close to where two people were reported to have been washed away by a flash flood early Friday, Travis County sheriff's spokesman Lisa Block said. The body still must be recovered and no identification has been made.

To the southeast along the rain-swollen Brazos River near Houston, prison officials evacuated about 2,600 inmates from two prisons to other state prisons because of expected flooding, Texas Department of Criminal Justice spokesman Jason Clark said. Inmates in a low-level security camp at a third prison in the area are being moved to the main prison building, Clark said.

All three prisons are in coastal Brazoria County, where the river empties into the Gulf of Mexico.

"TDCJ officials continue to monitor the situation and are working with our state partners as the river level rises," Clark said, noting that additional food and water has been delivered to prisons that are getting the displaced inmates and sandbags have been filled and delivered to the prisons where flooding is anticipated.

Another prison that's about 70 miles northwest of Houston saw a brawl between inmates and correctional officers on Saturday that began when flooding caused a power outage. Clark estimated as many as 50 inmates in the 1,300-inmate prison were involved.

The rising water in several Houston-area rivers and creeks prompted Harris County officials on Saturday to ask about 750 families in the Northwood Pines subdivision to voluntarily evacuate their homes and apartments. Officials also warned residents living near the west fork of the San Jacinto River, north of Houston, that rising waters were likely to flood homes, even those that are elevated, Sanchez said.

"The skies are clear and things look good. But we want to make sure people understand that we are not out of the woods yet. We have to keep an eye on water that's coming through our bayou system," said Francisco Sanchez, a spokesman for the Office of Emergency Management in Harris County.

In Kansas, the search for a missing 11-year-old boy resumed Sunday and expanded beyond the swollen creek he fell into Friday night, according to Wichita Fire Department battalion chief Scott Brown. "We are more in body recovery mode than rescue," Brown said Saturday night.

Four people died from flooding in rural Washington County, Texas, located between Austin and Houston, where more than 16.5 inches of rain fell in some places Thursday and Friday. The bodies of two missing motorists were found Saturday in separate parts of the county, according to Judge John Brieden.

Tropical Depression Bonnie reached the South Carolina coast early Sunday, bringing heavy rain and rough tides to an area packed with tourists for the Memorial Day weekend. Forecasters say up to 8 inches of rain have fallen in parts of southern South Carolina. About 3 inches of rain fell in Charleston in 24 hours and more is expected, according to the National Weather Service.