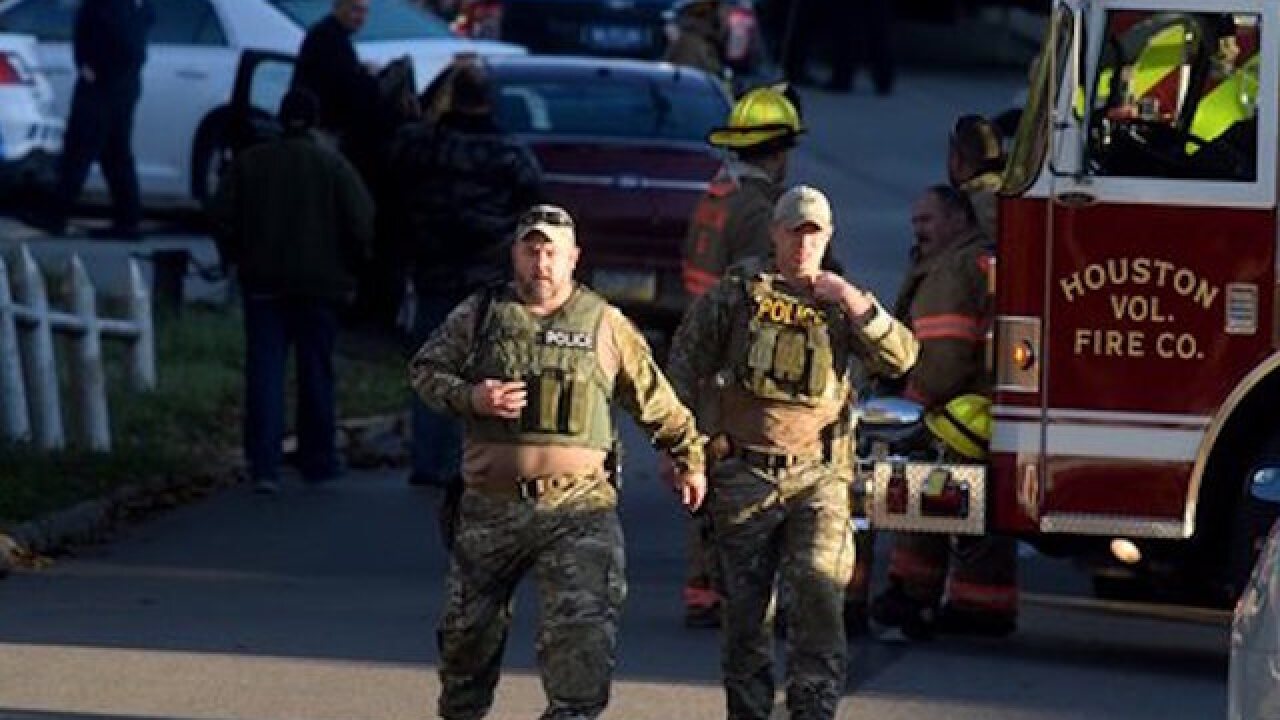 CANONSBURG, Pa. (AP) — A gunman with a history of domestic abuse fatally shot a police officer and wounded a second Thursday before he and a woman were found dead following a reported fight at their apartment, authorities said.

Officer Scott Bashioum and the other officer were responding separately to a 911 call from neighbors at around 3:15 a.m. when they were "ambushed upon their arrival" and immediately shot, state police Trooper Melinda Bondarenka said. The officers had arrived almost simultaneously, though authorities said other details of the initial confrontation weren't immediately clear.

Bashioum, 52, a father of four on the force for seven years, died less than an hour later at Canonsburg Hospital, the Washington County coroner said.

The wounded officer, whose name was not released, was in stable condition after surgery at Allegheny General Hospital in Pittsburgh, officials said.

The man and woman found in the home were not identified by police, but officials said the man died of a self-inflicted wound. No cause of death was given for his girlfriend.

Attorney David Wolf identified the dead couple to The Associated Press as Michael Cwiklinski, 47, of nearby Houston, Pennsylvania, and his girlfriend, Dalia Sabae.

Wolf said he had known the couple since November 2015, when Cwiklinski was charged with simple assault and harassment for swinging a bag of merchandise and hitting Sabae in the eye. The case was resolved with the assault charge being dropped and Cwiklinski pleading guilty to harassment. He was sentenced to anger management classes and required to have a mental health evaluation, Wolf said.

Neighbors said police were called to the couple's duplex frequently, and Canonsburg Police Chief Al Coghill confirmed the gunman was known to authorities, without naming him or providing details.

Sabae obtained a protection-from-abuse order last month, after dropping one she had last year, Wolf said.

"She told me they were having trouble again," said Wolf, who couldn't represent Sabae because he represented Cwiklinski. Wolf said he had encouraged Sabae to get another protection order and said Cwiklinski was there when he ran into the couple at the county courthouse.

Cwiklinski and Sabae, an Eqyptian citizen, had met online, the attorney said.

Authorities said the duplex may have been "booby-trapped" but declined to provide details. The bomb squad from neighboring Allegheny County was called to safeguard the scene before police entered and found the couple dead, police said.

Mayor David Rhome and Coghill said the shooting was unprecedented for Canonsburg, a borough of about 8,900 residents 20 miles southwest of Pittsburgh that is best known as the birthplace of crooners Bobby Vinton and Perry Como.

A military memorial outside the borough building, already decorated with flags for Friday's Veterans' Day observance, became a makeshift memorial for Bashioum with residents dropping off flowers, candles and other mementos.

The Canon-McMillan School District canceled classes Thursday because of the heavy police presence.