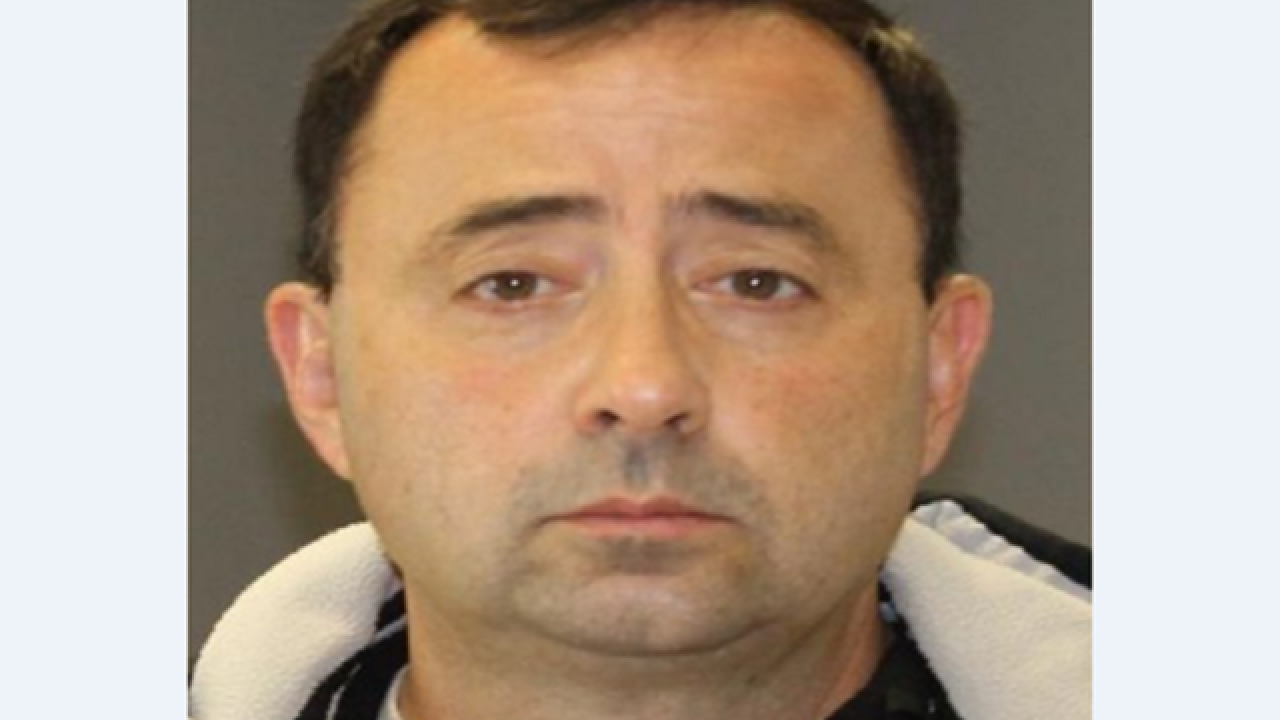 By: CNN
Posted at 12:19 AM, Jan 11, 2017
(CNN) -- Eighteen women and girls have filed a federal lawsuit against disgraced former USA Gymnastics and Michigan State University doctor Larry Nassar, alleging that he sexually assaulted them repeatedly for years during physical examinations.
The plaintiffs alleged a pattern of sexual abuse, disguised as treatment, that began in the late 1990s and continued into 2016. Most of the girls were teenagers at the time of the alleged assaults, although several were as young as 9.
Nassar, 53, is already facing state and federal criminal charges, including sexual assault with a person under 13 and possession of child pornography.
Seventeen of the plaintiffs in the civil suit, filed Tuesday, have chosen to remain anonymous. The other, Rachael Denhollander, says she was assaulted by him repeatedly at Michigan State in 2000, when she was 15 and seeking treatment for wrist and back pain.
"The decision to pursue civil charges was painful and it was difficult. It is a decision to continue to be immersed in these events on a national scale, for an extended period of time," Denhollander told reporters at a press conference Tuesday in Grand Rapids, Michigan.
The victims in the lawsuit are or were athletes in a variety of sports, including gymnastics, swimming, figure skating, track and field, field hockey, basketball, and soccer.
Also listed as defendants in the suit were USA Gymnastics, the national governing body for the sport, with whom Nassar was affiliated from 1996 to 2015; Michigan State University, where Nassar worked from 1996 to 2016; and Twistars USA, a Michigan gymnastics facility where Nassar also worked.
Nassar was the team doctor for the Michigan State University gymnastics and women's crew teams, an associate professor in MSU's College of Osteopathic Medicine and a physician for the US national gymnastics team through four Olympic Games.
The lawsuit alleges that USA Gymnastics, MSU and Twistars were negligent in allowing the abuse to occur, and that Michigan State kept Nassar on its staff even though at least three of his patients had filed complaints about his behavior.
The suit claims that MSU investigated one of the alleged victims' complaints in 2014 but dismissed them after determining that the victim "didn't understand the 'nuanced difference' between sexual assault and an appropriate medical procedure."
In a statement, Michigan State University said an internal review "discovered no evidence that any individuals came forward to MSU with complaints about Nassar before Aug. 29, 2016, other than the 2014 complaint that was investigated by MSU Police and our Title IX office."
Michigan State fired Nassar last fall and has launched an internal investigation.
"The university began an internal review in September, looking at all aspects of operations involving Nassar's work at the university," MSU's statement continued. "It will continue as new information and/or allegations are brought forward. An external law firm is advising MSU on the review, which will result in disciplinary action if appropriate. Also, MSU initiated a separate review looking closely at our clinic policies and operations to determine if there are steps we should take to make improvements."
An attorney for the alleged victims, Stephen Drew, said Michigan State University Police have since received more than 60 additional complaints since allegations against Nassar started to surface. CNN left messages for campus police but did not receive an immediate response
USA Gymnastics said in a statement that it's appalled by the allegations against Nassar.
"When we first learned of athlete concerns regarding Dr. Nassar in the summer of 2015, we immediately notified the FBI and relieved him of any further assignments. USA Gymnastics has fully cooperated with the FBI in its investigation. We find it appalling that anyone would exploit a young athlete or child in this manner, and we are grateful to the athletes who have come forward."
Calls to Twistars USA were not returned.
It could not be immediately determined Tuesday whether Nassar has retained an attorney in the civil suit. Matt Newburg, Nassar's attorney in the state and federal criminal cases, told CNN he does not represent him in the civil case.
Nassar was arrested on the sexual assault charges last November. In December, a federal grand jury indicted him on child pornography charges.
Nassar, who has pleaded not guilty, is being held at the Newaygo County Jail in White Cloud, Michigan, on the federal charges.
The lawsuit seeks unspecified compensatory damages. It also seeks institutional reform and new measures of accountability to ensure the safety and protection of other young athletes.
The-CNN-Wire
™ & © 2017 Cable News Network, Inc., a Time Warner Company. All rights reserved.
Copyright 2017 Scripps Media, Inc. All rights reserved. This material may not be published, broadcast, rewritten, or redistributed.