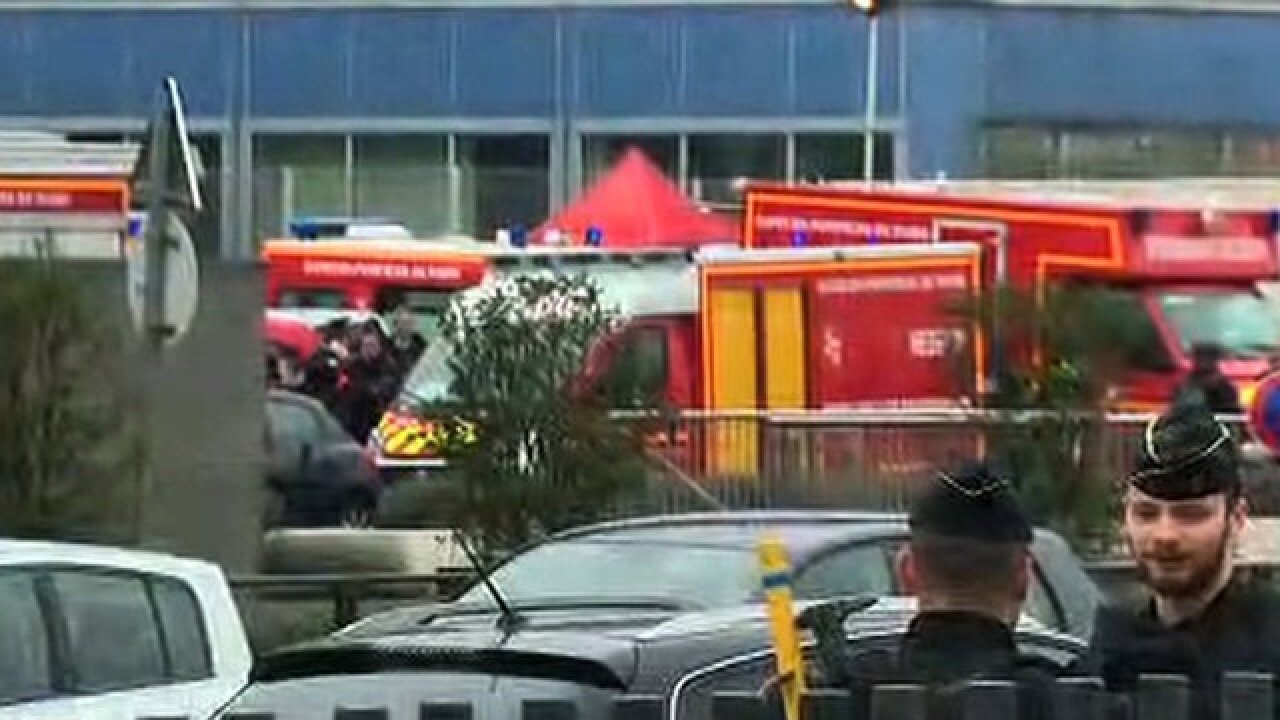 © 2017 Cable News Network, Inc.
CNN
<p>Security forces killed a man who tried to seize a soldier's gun at Paris Orly Airport. Authorities say hours earlier, the man was involved in a carjacking and another shooting at a traffic stop.</p>

PARIS (CNN) -- A man who tried to seize a soldier's gun at Paris Orly Airport was involved just hours earlier in a carjacking and another shooting at a traffic stop, French authorities said Saturday.

Security forces opened fire, killing the man during the morning attack at the airport.

About 90 minutes before the airport incident, the attacker had used a gun that fires steel pellets to shoot an officer after being asked for ID at a police checkpoint north of Paris, Interior Minister Bruno Le Roux said at a news conference. Such a weapon could inflict harm but would not usually be lethal.

The attacker then carjacked a vehicle south of Paris before making his way to the airport, Paris prosecutor's spokeswoman Agnès Thibault-Lecuivre told CNN.

Hours after the airport incident, police launched an operation in the same northern Paris suburb where the officer was shot, the National Police tweeted. The agency did not specify the reason for the operation, which was underway at 3:25 p.m. local time (10:25 a.m. ET).

The officer injured at the traffic stop is undergoing treatment but is not seriously injured, Le Roux said. No one else was hurt in the airport incident, Interior Ministry spokesman Pierre-Henry Brandet said.

The anti-terror prosecutor has opened an investigation, Thibault-Lecuivre said.

Police were questioning the man's father and brother, Thibault-Lecuivre said. The attacker, who was born in 1978, had been known to police for nine instances of armed robbery and drug trafficking, she added.

He also had been known to intelligence services, Le Roux said.

At Orly airport, the attacker tried to tackle a female soldier and take her weapon, French Defense Minister Jean-Yves Le Drian said. He was shot dead by two soldiers who were on patrol with her.

They responded with "remarkable professionalism and self-control" to protect their colleague and the public, he said.

The soldier was threatened by the man but "struggled and managed to keep her weapon, fighting against her attacker on the ground," a statement posted to Facebook by the French military read.

When she managed to release herself momentarily from the attacker's hold, her two colleagues, one of them a reservist, opened fire and killed the man, the statement said.

This was the fourth attack against security forces deployed as part of France's Operation Sentinel, Le Drian said. The national security operation was launched following the Paris terror attacks in January 2015; France has been under a state of emergency since November that year.

Le Roux also praised the swift response of security forces at the airport.

The traffic stop where the attacker's identity papers were checked was in Garges-lès-Gonesse, north of Paris, Thibault-Lecuivre said. The man later stole another vehicle at gunpoint in Vitry-sur-Seine, she said, on the southern outskirts of Paris near the airport.

Whether the attack was terrorist in nature would be established by the judicial authorities, the Interior Ministry tweeted.

"The individual was known to the police and judicial services. There is therefore 'possibly' a terrorist motivation for this act," it said.

"I want to salute the courage and the exceptional behavior of the security forces who managed to put away the individual and to do so in an extremely complex situation because this occurred in Orly Airport," he said at a news conference.

The anti-terrorism prosecutor is investigating the motives and circumstances of Saturday's attack and the existence of any accomplices, according to a presidential statement.

France's presidential candidates, who are campaigning ahead of next month's first round of voting, took to Twitter to pay tribute to the response by the police and the military.

Emmanuel Macron, an independent centrist, said the military "once again showed their professionalism this morning in Orly."

François Fillon, of the centre-right Republican party, said: "Tribute to the men and women of Sentinel who work for our security and once again displayed courage and efficiency."

Marine Le Pen, presidential candidate for the far-right Front National party, said: "France brimming over with violence, a consequence of the lax successive governments. But there is the bravery of our soldiers!"

The airport was evacuated as an elite operations unit and bomb squad officers rushed to the scene. The bomb squad finished its search for explosives but did not immediately report the findings, local authorities said. More than 450 officers were involved in the operation to secure the airport and search for evidence, France's National Police said.

Paris Airports, the group that manages the city's airports, said both Orly terminals were reopening Saturday afternoon after a suspension of several hours. Travelers should check with their airlines before heading to the airport, it added. Some earlier flights were rerouted to Paris Charles De Gaulle Airport.

Travel for about 2,000 people had been severely disrupted, the president of Paris Airports, Augustin de Romanet, told CNN.

"It has been very disruptive, because we could fear many, many things, but all the police forces and the army have been very effective, so everything is OK now," he said.

With roads around the airport closed off by police as the security operation unfolded, travelers earlier tried to make their way to the airport on foot with their baggage.