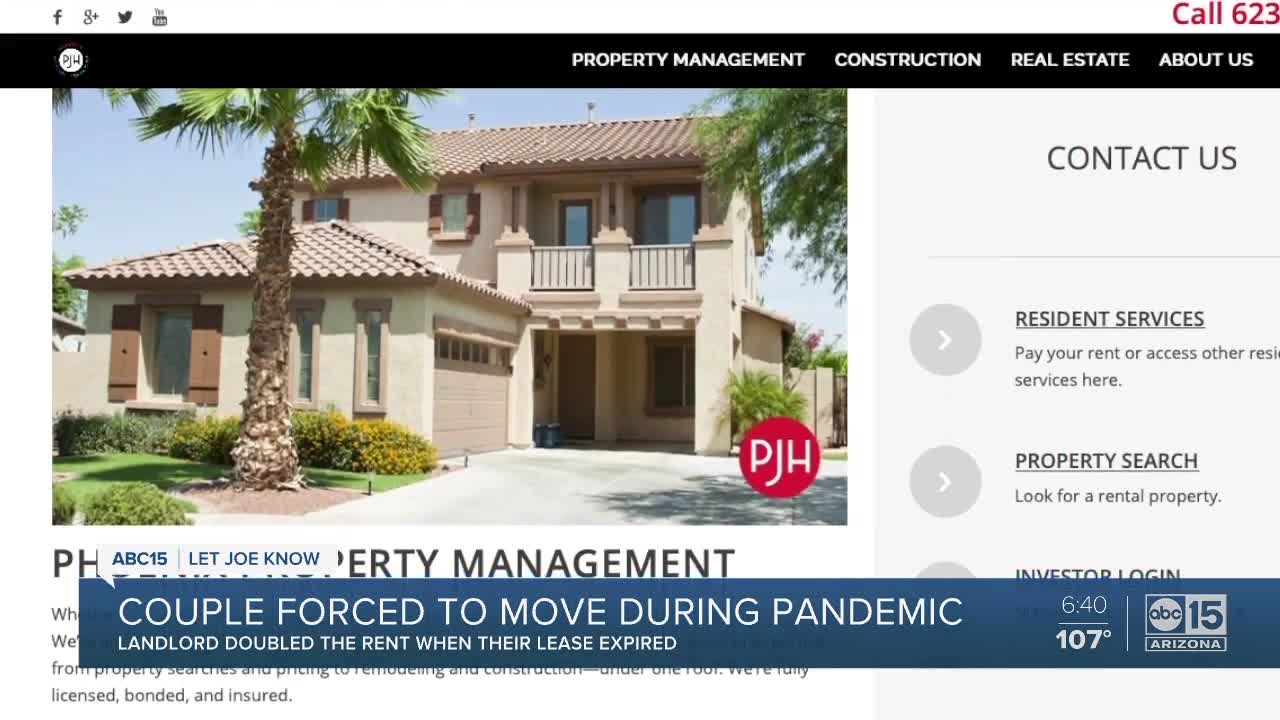 A Sun City West couple is being forced to move during the pandemic after their rent was doubled by their landlord.

PHOENIX — Despite an executive order from Governor Doug Ducey aimed at keeping people in their homes during the coronavirus pandemic, there's been a number of people who have been forced out on what could be considered technicalities.

In part with The Rebound Arizona and holding businesses accountable, ABC15 has found even those who can and want to pay rent can be left with no other option but to move.

For the last five years Ellie and Jim have called their rental in Sun City West home.

Jim's medical needs forced them to leave their life in Bullhead City and make their way closer to Phoenix and to specialized doctors.

But now, both in their 80s, the couple is forced to pack up and move once again. Their lease was up and the landlord was willing to renew, but with a catch.

"I was in shock. I really, really was. I was probably a little hysterical at the time because we've been here five years," said Ellie.

The couple got a letter from PJ Hussey and Associates, the firm that manages the property for the owner. It states the rent was increasing from $1050 to $2400 a month. Plus, they wanted an additional $1500 deposit, a large increase for anyone, let alone seniors on a fixed income during the coronavirus.

When Ellie and Jim's neighbors found out about what was happening, they tried to step in and help.

They believe a recent, expensive roof repair is to blame for the increase, but say doubling the rent is outrageous when similar homes in the area go for about $1500 a month.

"This happened right after COVID," said Ellie's neighbor Carol. "They're taking advantage of older people because they don't have any way to fight back and it's wrong and it's unfortunate."

Now they say they tried to negotiate the lease but they couldn't get anywhere with the management firm PJ Hussey and Associates or even get into contact with the owner.

It's unclear how they could more than double the couple's rent during a pandemic when rentals may be hard to find.

When we reached out to the management company, they said someone would get back to us, but they never did.

As a result, Ellie and Jim were forced to move further away from their doctors and friends.

If we'd known about this one earlier, we may have been able to stop it.

Facing something similar - Email us at rebound@abc15.com.