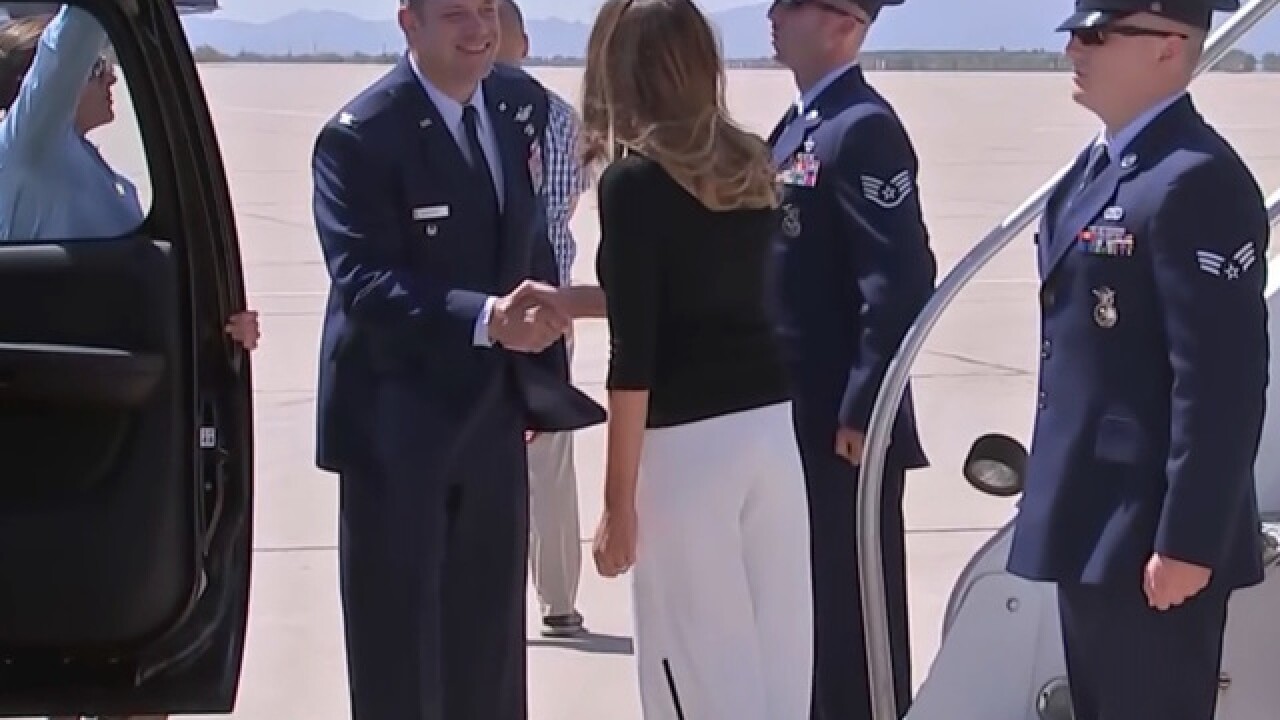 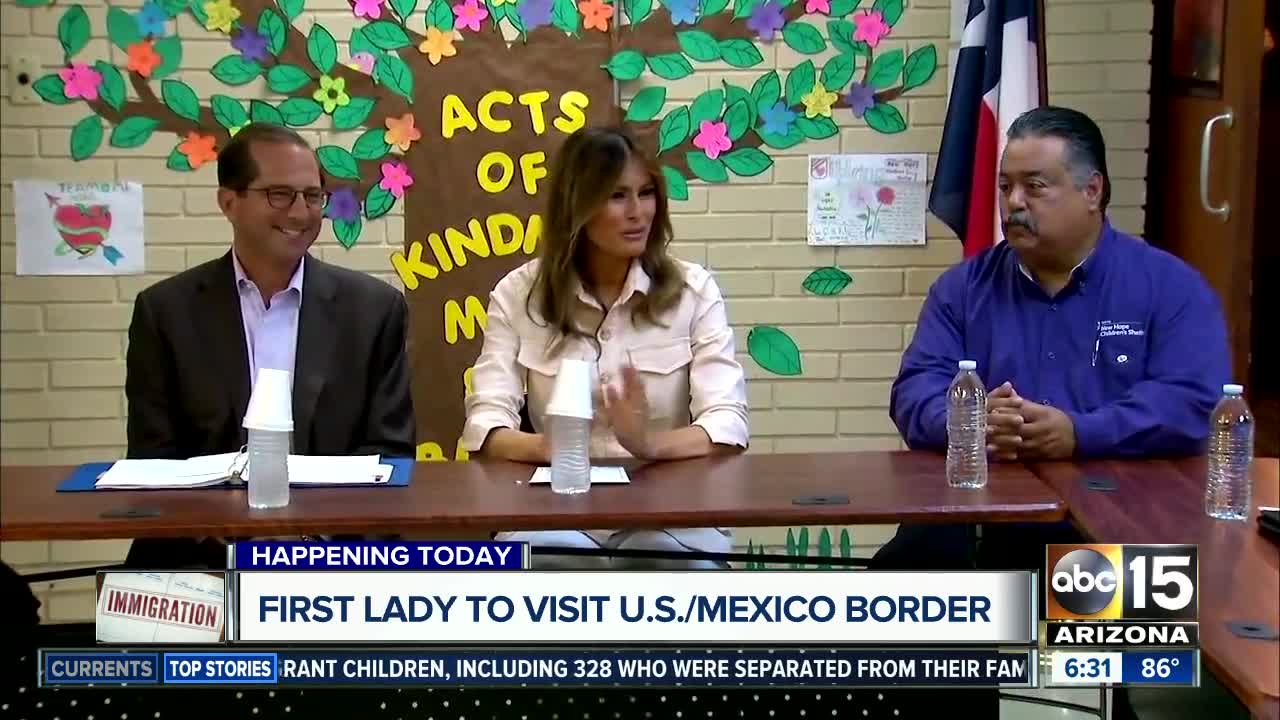 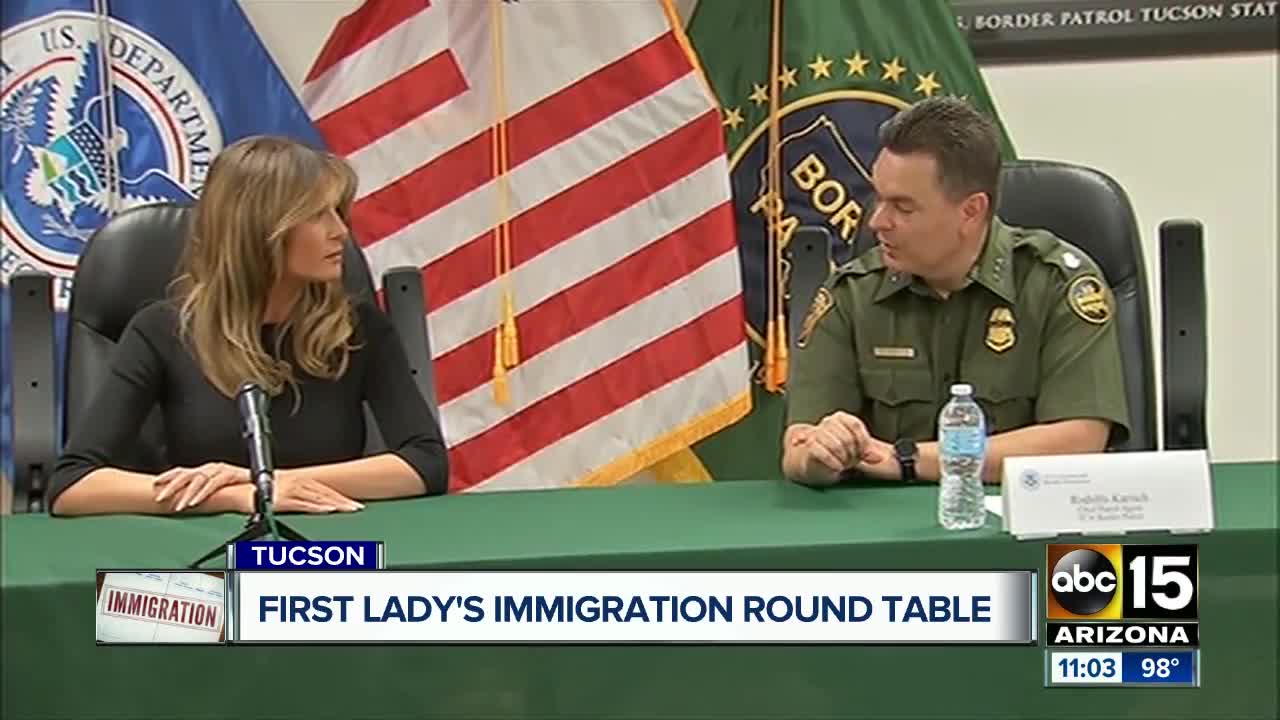 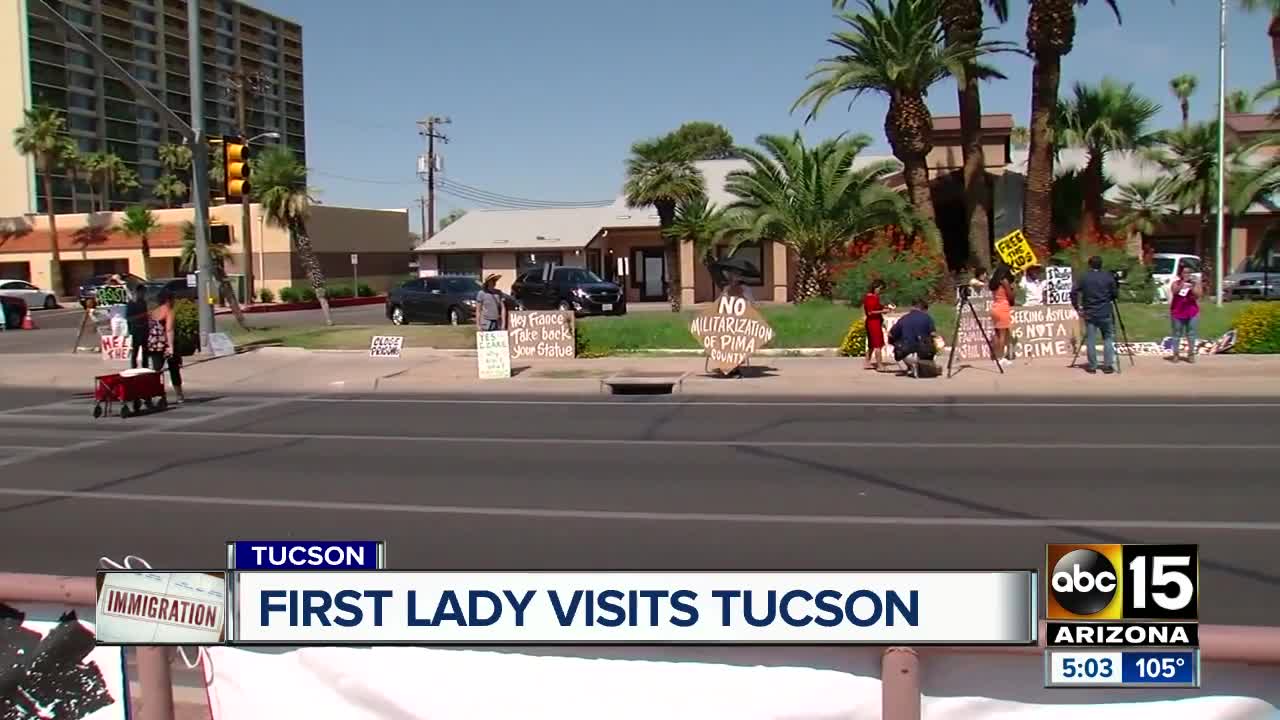 First lady Melania Trump made a second visit to a border state Thursday, meeting face to face with people directly affected by her husband's hard-line immigration policies. This time, she chose less controversial apparel than her last trip, which was overshadowed by a jacket.

"I'm here to support you and give my help, whatever I can" on "behalf of children and the families," Mrs. Trump said as she sat down with officials at a U.S. Border Patrol facility in Tucson, Arizona, the first stop of her trip. She later traveled to Phoenix, where she visited a complex that is housing dozens of migrant children separated from their parents.

It was the first lady's second trip to a border state amid an ongoing outcry over President Donald Trump's now-suspended policy of separating migrant children from their families when they cross the border illegally. Many were placed hundreds of miles away from one another and have been struggling to be reunited.

"She cares about children deeply and when the news started to hit, I think she was very concerned and wanted to make sure the kids are being well taken care of," Mrs. Trump's spokeswoman, Stephanie Grisham, said on the flight to Arizona. "She doesn't like to see parents and kids separated."

Mrs. Trump made the trip in a risk-averse ensemble of a black sweater and white slacks.

The first lady's first trip to the region, a week ago Thursday, had been overshadowed by a jacket she wore to and from the border town of McAllen, Texas, that had a baffling message on the back: "I really don't care, do u?"

The choice ignited the internet and spawned a slew of memes about what the first lady, a former model, may have meant. Her spokeswoman said it was just a jacket, with no hidden message. But the first lady's husband undercut the no-message message by tweeting that she was saying she really doesn't care about the "fake news" media.

On Thursday, Mrs. Trump visited what officials described as a short-term holding center for migrant children in Tucson and then traveled to Phoenix, where she visited Southwest Key Campbell, which receives grant money from the Department of Health and Human Services. A total of 121 children are being held at the facility, including 81 who had been separated from their parents.

Mrs. Trump visited three classrooms, including one day care room with nine babies or toddlers. Another classroom had five cribs lined up against a wall.

A staffer at the facility said the children had been there, on average, 48 days.

Grisham said the first lady wanted to learn about the border processes making news around the world.

Asked whether the first lady agrees with her husband's polices, Grisham said, "She definitely believes in strong border laws," and wants Congress to strengthen immigration policies. But she also believes in "governing with heart," Grisham said.

Protesters spent Thursday morning outside a facility for detained children in Tucson that's operated by the nonprofit Southwest Key. But Mrs. Trump instead met with the U.S. Customs and Border Protection, the agency that oversees the Border Patrol and customs officers.

Anticipating a trip to Phoenix, protesters also gathered outside the Southwest Key facility in the city's west side. A few dozen protesters ran along the first lady's motorcade as it departed.

"If everyone could go the legal way we would do it," protester Vannia Moreno said. "We don't enjoy crossing illegally."

"She's an accomplice to the Trump Administration, playing a political game with our lives," said Maria Castro with Puente Arizona.

A federal judge on Tuesday ordered  that thousands of migrant children and parents be reunited within 30 days -- and sooner if the youngster is under 5. The order poses logistical problems for the administration, and it was unclear how it would meet the deadline.