Working to death: Some Latinos feel forced to work despite having COVID-19 symptoms 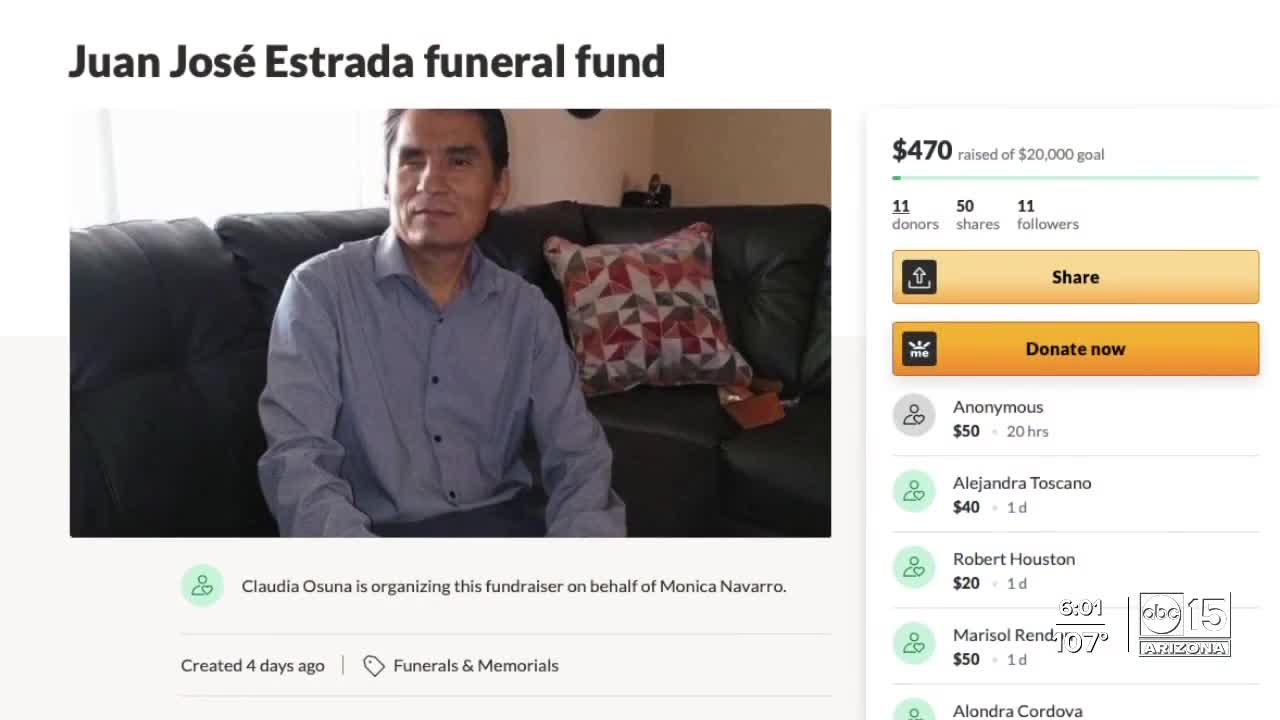 A Valley father has died of coronavirus after his boss allegedly told him he'd be fired for missing time off.

Fear of losing their jobs is driving some Latinos to make a desperate decision to tough it out at work despite feeling ill during the COVID-19 pandemic.

Monica's husband, a father of three died of COVID-19 on Sunday. Navarro is now speaking out against his employer, a private contractor named Genesis Janitorial Services based in Missouri.

"His manager told the employees that if they missed work, they would get fired. He was fearful and worked until his body couldn't handle it anymore," added Navarro.

Jose Cordova Rodriguez had been cleaning a hardware store in Avondale since the pandemic started. Cordova was known for being a great worker at the hardware store, his wife says. He appreciated having a job during the pandemic.

According to his family, Cordova worked seven days a week, never taking a day off, until the day he died.

"He was having symptoms that looked like the ones they say are for coronavirus, I told him maybe he had it, but he said no," explained Navarro.

Cordova couldn't afford to lose his job right now, not during a pandemic, so he woke up early on Sunday and showed up to his morning shift on time at the hardware store.

"When he was there, a manager at the hardware store told him he didn't look well to go home and rest and to go back once he was feeling better," said Navarro.

Fearing he would lose his job, Cordova immediately contacted his manager at Genesis Janitorial Services to let her know that he had to go home.

This is a screenshot of her response:

Genesis manager: "Why are you calling me?" Cordova: "The manager sent me home, he says I don't look well and to return once I feel better." Genesis manager: "Why, were you coughing or something?" "And did you do something or nothing around the store? Cordova: "He saw me with difficulty breathing and called me into the office."

"Instead of asking if there was something they could do for him, she asked if he at least got to clean something," said Navarro.

Navarro says the manager texted him on Monday to see why he didn't show up to work, "That's when I called her to notify her of his death."

The ABC15 Investigators spoke to Cordova's manager. In a phone call, she said the reason for her text on Sunday was only in case there was something else that needed to get done at the store.

When Cordova went home on Sunday, he collapsed just steps away from his apartment.

His older son found him dead in his room later that day. Navarro says he died in his sleep.

Navarro is unemployed. She lost her job due to COVID-19 closures and now faces a funeral bill she cannot afford.

"They charge from eight to nine thousand dollars to bury him. He had asked me before to not cremate him. It breaks my heart not being able to afford a proper burial for him," said Navarro.

"How am I going to pay the rent?" wondered Navarro, who not only fears losing her home but also access to education for her children. Navarro says the family does not have internet or a computer.

But, "I first need to figure out how I'm going to collect the money to say the final goodbye to my husband," she says.

Latinos have been hit disproportionately hard by the pandemic. Lack of resources, not being able to work from home or quarantine themselves, language barriers, and the fear of losing their jobs all contribute to the difficulties they face.

Quezada says employers and landlords must follow the Governor's orders, "If you have any problems with an employer, with a landlord, call my office, and if I'm not your legislator, I will refer you to someone who can help you."

Navarro says she wants to stop more people from experiencing the loss she has. She would like more training for managers who oversee workers during the pandemic. She says it could be the difference between life and death.

The ABC15 Investigators reached out to Genesis Janitorial Services for this story. They released the following statement:

"On July 13, 2020, Genesis Janitorial Services learned that its employee, Mr. Jose Cordova Rodriquez, unexpectedly passed away. At this point, we have limited information regarding Mr. Rodriquez's illness, but we are working to gather more information about the circumstances.

Genesis takes the safety and well-being of its employees and customers very seriously. We continue to follow recommendations of the Occupational Safety and Health Administration (OSHA) and the Centers for Disease Control and Prevention to protect the health of Genesis employees and the entire community. Mr. Rodriguez was a valued employee, and our deepest sympathy is with his family during this difficult time."

If you would like to help the family, visit their GoFundMe.