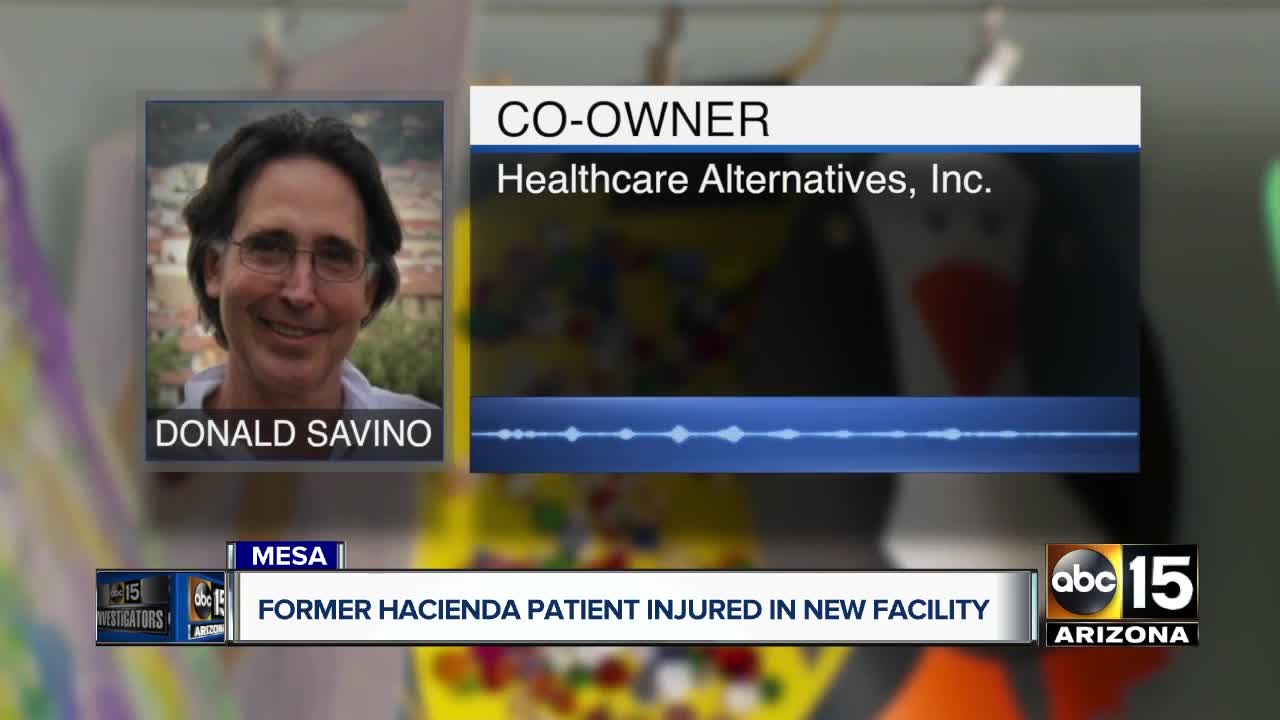 A Valley group home that took in former Hacienda patients is facing its own controversy.

The state has confirmed that staff at the facility have now complied with all requirements and taken corrective action to ensure the safety of patients.

This means the facility can now start enrolling patients once again. Officials say they will continue to monitor the facility.

------------
A Valley group home that took in former Hacienda patients is facing its own controversy.

Hacienda HealthCare shut down their skilled nursing facility earlier this year after a disabled resident in their care was allegedly raped by a male nurse and gave birth to his child.

After the downsizing, the state scrambled to find other facilities that could accommodate the medically fragile patients from Hacienda.

ABC15 learned that the state has suspended enrollment of new patients at one of the facilities that stepped up to help after a former Hacienda patient suffered burns while in their care.

The co-owner of the facility, Don Savino, spoke to ABC15 about how devastated they were after the incident. Savino said the facility is taking corrective actions to make sure something like this does not happen again.

Savino said a nurse, who they have let go, misused a medical device called a hypo-hyperthermia blanket that received with a four-year-old child who came to them from Hacienda HealthCare in July 2019.

"This is the first time we've ever seen anything like this one," said Savino.

The child, who Savino said was unable to speak, had a medical problem that included her body not being able to control its temperature, which is why she needed the blanket.

"We were told they were closing their facility, and there were two children left, and they had to get them out. They didn't give us any real instructions on this thing, no manuals, no nothing," said Savino. He described the incident as devastating.

Healthcare Alternatives is a facility that is licensed by the state.

According to its website, the facility has several group homes scattered through non-descript neighborhoods throughout the Valley. Many of their patients are little children with severe medical needs, most of them dependent on technology to survive. The facility provides around the clock care in a home-like setting for those with feeding tubes, a ventilator, or are oxygen-dependent.

Other residents there include those with end-stage renal disease, pre and post-care organ transplants, long term IV antibiotic needs, seizure disorders, and other complex needs.

Savino said staff at the facility had been devastated since this incident took place.

"We love our kids, we love taking care of them, we have six registered nurses that do nothing but transport kids to doctor appointments, that's their job," said Savino.

He said he did not know how the little girl was doing as they could not get any information on her condition.

"We had one nurse make a mistake in judgment when she was trying to help the child, and now this has fallen on us," said Elizabeth Savino, Don's wife who co-owns the facility as well.

"That is why I am so very hurt by all of this. We treat these children like our own. It has been a family business since 1992, and it's our life," she added.

The Savino's added that they had submitted everything the state had asked them to and were working on trying to get back in good standing with the Department of Economic Security.

ABC15 reached out to Hacienda HealthCare for a statement.

A spokesman said: "Hacienda is not in a position to speak about former patients and the care they receive at other facilities."

The spokesman with the Department of Economic Security says the facility will not be able to enroll any new members "until they demonstrate that they meet all requirements to ensure the health and safety of the members."