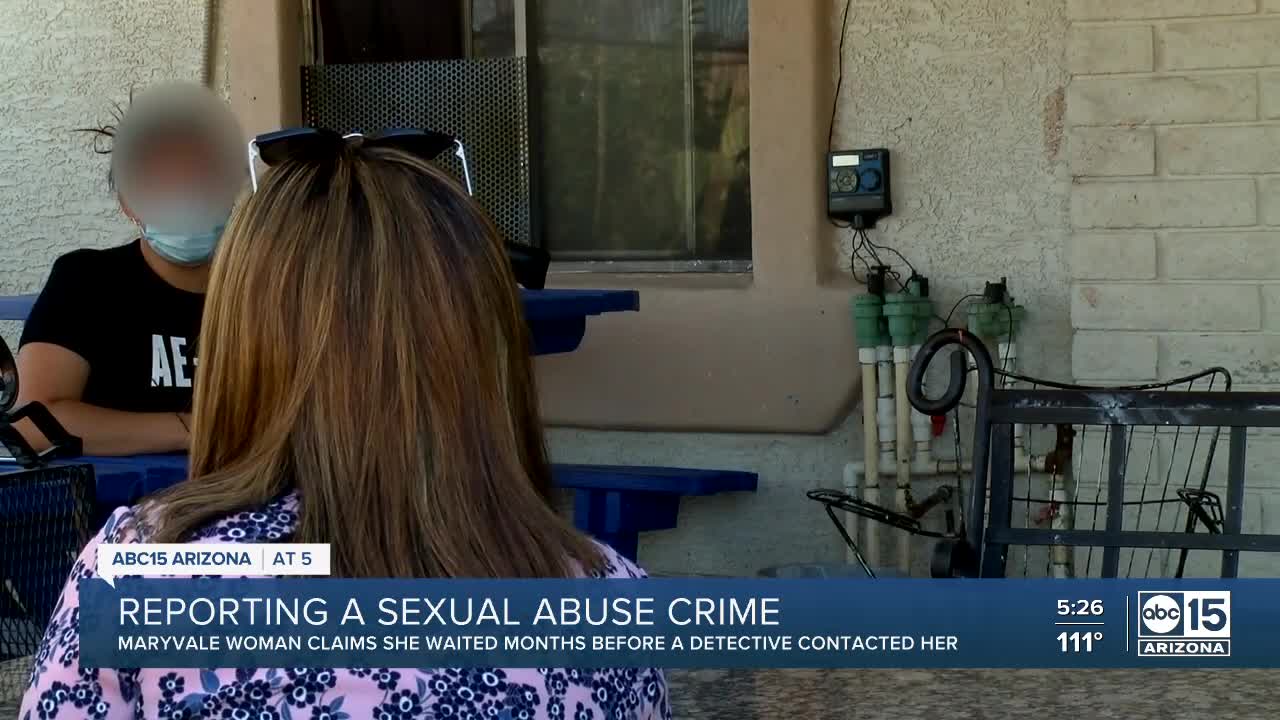 A 21-year-old Maryvale woman said she waited two months for a detective to contact her after she reported being sexually abused and groped by her boss.

In the case of a 21-year-old Maryvale woman, she said she waited two months for a detective to contact her after she reported being sexually abused and groped by her boss.

Warning: Some of the language in this story details an allegation of sexual abuse. It may be difficult for some to read.

“He grabbed my ‘boob’ and when I was putting down the chairs, he slapped my ass, and when I turned around, he said he was waiting for me to do it again,” stated a woman who asked to only be identified as “Carolina” for privacy purposes.

ABC15 does not publish the names of alleged sexual abuse, sexual assault or rape victims unless those individuals are willing to be named.

Carolina says she worked for over six months as a waitress at a Mexican restaurant in Maryvale, but soon started noticing inappropriate behavior from the owner.

“Every time he had a chance, to me and the other girls, he would make comments like, ‘you look sexy today,’ and stuff,” said Carolina.

She says she needed the job, so she decided to just ignore him. However, on June 2, 2020, she says he touched her. “I told my family, and we called the cops. It wasn’t easy. It's scary and embarrassing.”

Carolina went forward and made a sexual abuse report with a Phoenix police officer, but days passed by and no one had reached out to her.

“It was on June 9. I called them to see why they were taking so long, and they said that the office was closed. First, I thought it was because of the whole virus thing,” expressed Carolina.

The ABC15 Investigators interviewed Carolina on August 6. Carolina stated at that time to not have received any calls or voice messages from Phoenix police.

“I left several voice messages to the detective and she didn't call back. She hasn't called back yet.”

On Aug. 9, ABC15 reached out to Phoenix police to ask for the status of the investigation. We didn’t receive a response until two days later.

A Phoenix police spokesperson released the following statement: “I was able to confirm that the detective in this case has attempted to contact the victim in this case on more than one occasion.”

We requested the number of times the detective attempted to contact the victim. Also, what type of attempts, other than a phone call, were made.

“Without getting into any specifics of the investigation, I can tell you a supervisor was able to get in touch with the victim. The victim said she had actually been without a phone for a while, therefore, had not received any messages,” stated a Phoenix police spokesperson.

However, Carolina says she was without a phone for only three days and police reached out to her after ABC15 started asking questions.

So how long should sexual abuse victims wait to get a detective to reach out to them? “I don't know why they don't really do anything up in here. I'm doing this so that he won't happen to other girls,” said Carolina.

In a statement, a Phoenix police spokesperson said: “When a detective receives a case, they review the case to assess what needs to be completed to further the investigation. The timeframe on conducting follow up interviews with victims is based on a case by case basis, an example of this would be if the victim was hospitalized. 2020, has come with its challenges, specifically those related to the health pandemic. Keeping the health of our victim's in mind we are currently taking precautions outlined by the CDC as we investigate these crimes.”

Carolina only hopes that by bringing some light to her case, Phoenix police would act faster and investigate a man she believes has been sexually abusing other women at work for many years.

“I feel bad because people are not paying attention to what's really going on. Imagine, he did that to me and I'm 21 years old. I'm pretty sure there are other girls, younger girls, younger than me, that he might have done something to.”

This isn’t the first time ABC15 has been contacted by women who tell us they feel their claims of sexual abuse have been pushed aside for months by Phoenix police.

In June last year, we spoke with five women who said they were ignored. All the women identified their perpetrator as the same man, but it took four months for police to contact some of the victims.

By the time a warrant for his arrest was finally issued, neighbors told us the alleged suspect in that case had sold his house and moved to another country.