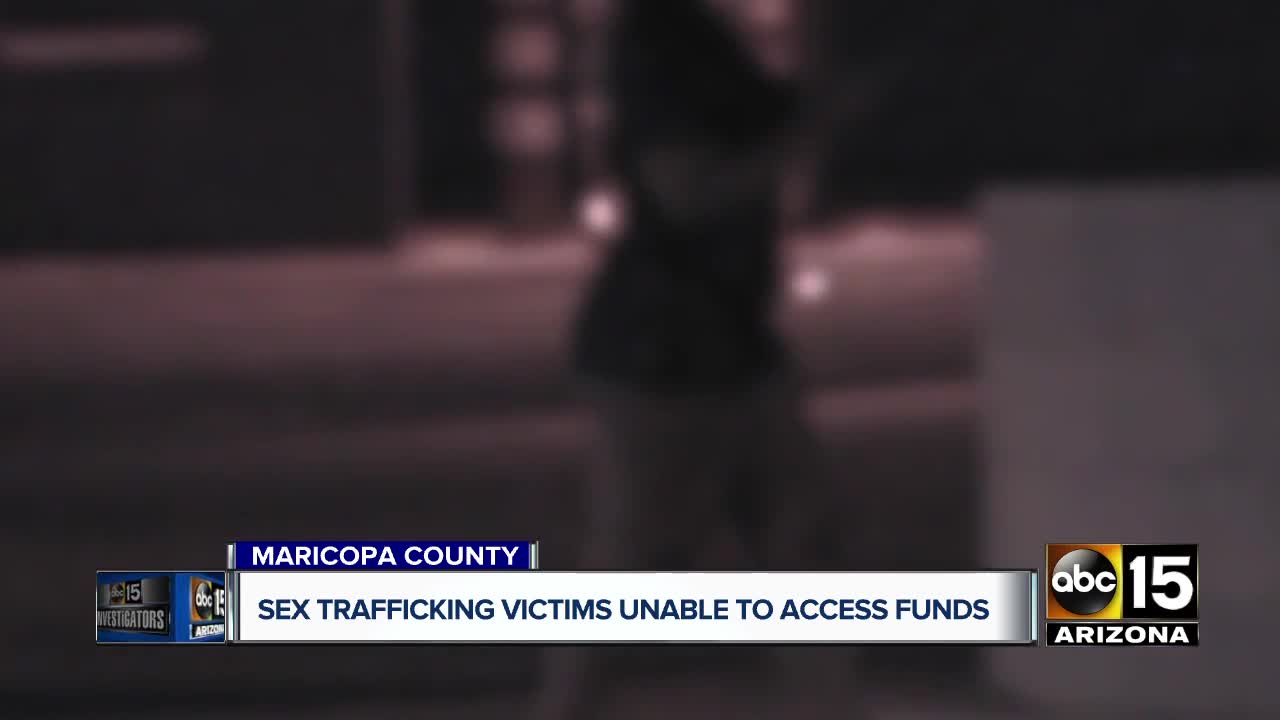 Victims of a crime unable to access money set aside to help them get back on their feet.

PHOENIX — Human trafficking is a crime the state of Arizona takes very seriously.

The Governor's Office of Youth, Faith, and Family even have a task force in place to address issues surrounding human trafficking.

Valley police agencies work around the clock to rescue victims trapped in sex and labor trafficking, and they also go after the traffickers and "John's" or customers who pay for services offered by these trafficked victims.

However, after a victim takes the big step of finally leaving the dangerous world behind, ABC15 is learning the road to rebuilding their lives is filled with roadblocks and challenges. A road that sometimes leads the victim back to the streets and the life she or he has so desperately tried to leave behind.

Lea Benson, a prominent advocate who has helped dozens of sex trafficking survivors build new lives, says one of the biggest roadblocks her agency faces is accessing money that is specially set aside for victims of a crime. She is referring to the victim's compensation fund, run by the Maricopa County attorney's office.

"Our volunteers have just given up trying to access those funds, it is extremely disheartening that the process is so complex, confusing, and it makes it almost impossible to get money that is set aside, especially for victims," said Benson.

Benson worked as the CEO of StreetlightUSA for several years before becoming a founding member of Cece's Hope center, a non-profit set up to help older victims of sex trafficking get access to services such as housing, transportation, medical, and mental health needs.

Benson described the website as confusing, the application as complicated, and said it was disappointing to see the requirements victims needed to come up with before they could be considered eligible to receive the funding.

"In order to get some of these girls services that are set aside for kids that have been trafficked, you've got to have a record," said Benson. Records, and police reports proving there was a crime.

Benson said in many of these sex trafficking cases, the victims did not file police reports, as police were actually working on trying to help them get out of the trafficking industry. They were taken to safe houses and offered services. Even though police departments like Mesa said they were not charging sex trafficking victims with crimes, as they considered them to be "victims," some of the girls did have charges stacked up against them from other incidents.

Brian Steele, the CEO and executive director of the Phoenix Dream Center, said some of the victims were trafficked as children. They had their identities stolen by their traffickers so they could face charges in relation to that. This meant it was difficult for these victims to find jobs or housing as they now had a "record." It was another roadblock for advocates trying to help victims access funding and community services.

Steele told ABC15 it's actually easier for advocates to access federal funds that it is dollars doled out to the county to help human trafficking victims.

The application process also required the victims to pay for services upfront, then turn in receipts for reimbursement.

"These women don't have the money upfront, they are just trying to start over, they need help now," said Benson.

Benson said these victims needed a lot of support when they decided to get out of the industry.

"We need access to those funds so that these girls can get help," said Benson.

Benson introduced ABC15 to a girl we are calling "Samantha" to protect her identity.

Samantha got lured into the world of sex trafficking while she was in high school. She described her encounters with men as humiliating and finally decided to leave that life behind, but when she did, Samantha says she had nowhere to go.

"I was homeless and slept in my car for six months," said Samantha.

She also said she had no self-esteem and did not think she could survive on her own until Cece's Hope Center took her case and helped her slowly rebuild her life and her confidence.

Benson worried if women like Samantha were not offered support in the form of housing and mental health, counseling girls like Samantha would go back to the only life they had known, out on the streets.

"The stats are once you get into the life, it's a 7-year life span," said Benson.

Steele, who chaired the state's human trafficking task force, said they were aware of these problems and are working to make state officials aware as well.

ABC15 reached out to the County Attorney's office several times to find out if they could let us know how their victim's compensation program worked and what their office was doing to help victims of human trafficking.

A spokeswoman said she had received our messages. So far, we have received no information or calls from the County Attorney's office.

Benson says she hopes the state officials will hear their call for help.

"I would say to Governor Ducey, we need to fix access to the victim's compensation fund," said Benson.

To learn more about Cece's Hope center or to donate, click here.

You can learn more about the state's human trafficking task force and they work they do here.