Getting police records: What are your rights? 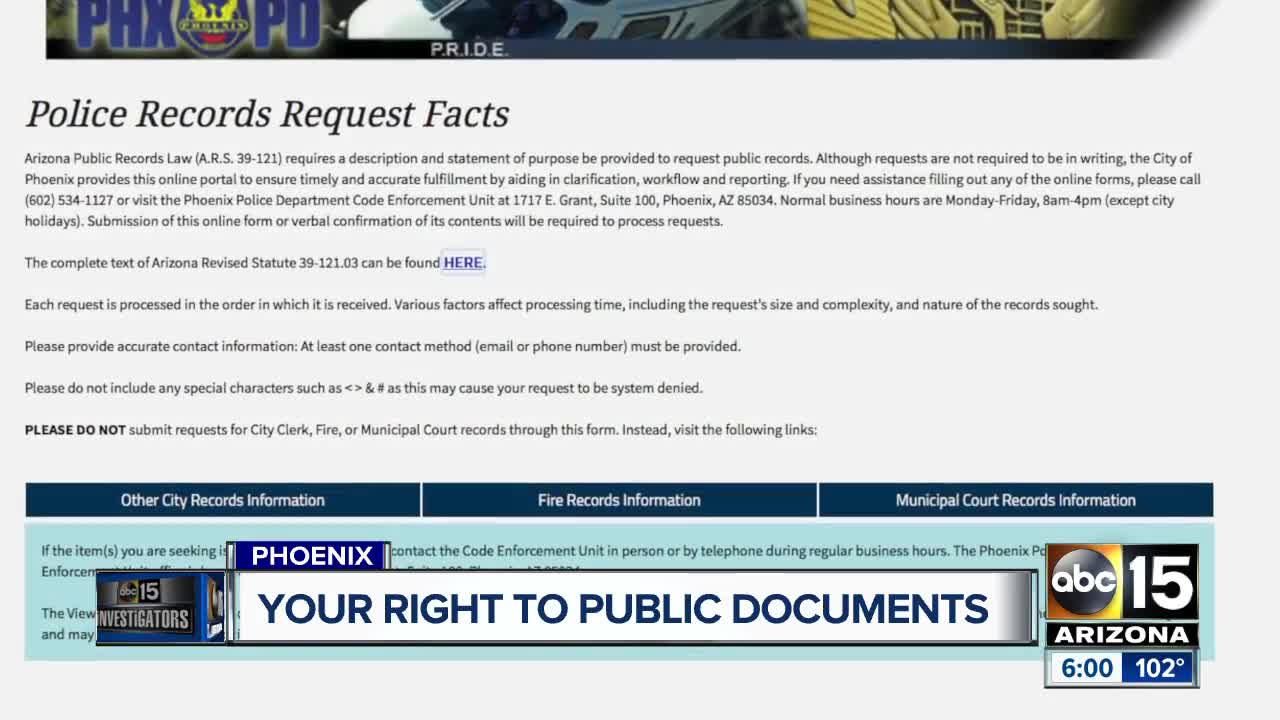 The Phoenix Police Department says it receives 3,000 requests per week, and lawyers say they have to file suit to get access to records in a timely fashion.

PHOENIX — Many law enforcement agencies say they are transparent, but when it comes to getting access to public records, even items as routine as a police report, some in the community will argue there is no transparency at all.

By state law, public agencies must release public documents within a reasonable amount of time. You have a right to records, but frequently agencies, including police departments, stall when asked for documents. In some cases, it can be weeks or even months to get requested items released.

At ABC15, we have seen police agencies at times not release records such as incident reports and body camera video until eight or nine months afterward.

Attorneys in the Valley say that kind of delay is not considered a "reasonable amount of time" and can be a violation of your rights.

Here is how it works: In the city of Phoenix, if you want a police report or to request another public document, you have to fill out a form through its online records portal here. Then, the waiting begins.

"People who expect reports can't expect to get it on the spot, but they can expect to get it within a reasonable amount of time. If it goes on for a couple of weeks and they don't have it to you yet, [or] it's available to the police but not to the victims, they should talk to a lawyer. They may be able to sue and get the documents more quickly," said attorney Kory Langhofer.

Phoenix attorney Benjamin Taylor said it was not uncommon for his firm to file a lawsuit to compel police departments to release public records needed to put together a case.

He added that he was still waiting to get police reports and body camera footage in a case involving a client who alleged that two police officers 'roughed him up' over a car they believed was stolen. His client was not charged with any crime.

"Phoenix police is not being transparent with us and our client," said Taylor.

At a recent town hall meeting hosted by the city, several residents spoke up about transparency within the Phoenix Police Department. Some of them included families of people who had been shot by Phoenix police officers.

"Yesterday was seven weeks ago that my brother died. To this day I have no police report, no incident report, no use of force report. I can't get anything," said one community member during the forum.

"Me and my mom have been going back and forth to ask for the police report, and we still haven't got it," said another community member.

ABC15 reached out to Phoenix police to find out what was causing all of the delays in their response to public records requests.

The department declined our request for an interview but did answer some of our questions via email. A spokesman said the records office receives an average of 3,000 public record requests per week.

Attorneys ABC15 spoke to said that was no excuse for the slow response from the department.

"That is no excuse at all. The Phoenix Police Department has a lot of requests, but they also have a lot of resources. They have taxpayers to fund it. If they don't think they can respond to these requests, they should just hire someone else then," said Langhofer.

The department has a section on its website dedicated to transparency and basic information about all officer-involved shootings committed by its officers, but some community advocates felt that is not enough.

"I believe that's like giving out a little carrot to the public to make them feel good. True transparency is when you release the whole video when you release the whole police report," said Taylor. "It seems like they need to hire more staff to go through these records requests because there are deadlines out here. People have legal rights [to records] in order to be able to pursue a case."

As for other cities or public organizations, some also have online portals like Phoenix while others require a written or emailed request be sent. The processes are typically details on the organization's website.