A bus driver was arrested in Sierra Vista on July 5, after being accused of inappropriate actions towards a 12-year-old student.

According to the Cochise County Sheriff's Office, 70-year-old David Fabian Falcon touched the student while on the bus that he was the driver of.

Authorities were made aware of this after the girl reported the situation to her mother at the end of May.

The Sierra Vista Unified School District fully cooperated with the Sheriff's Office and fired Falcon based on the finding of the investigation.

The investigation revealed that there were multiple incidents of inappropriate behavior and touching by Falcon towards the 12-year-old.

Falcon was arrested and booked into Cochise County Jail on charges of sexual abuse. He remains in custody on a $100,000 bond.

SVUSD posted a message in response to Falcon's arrest: 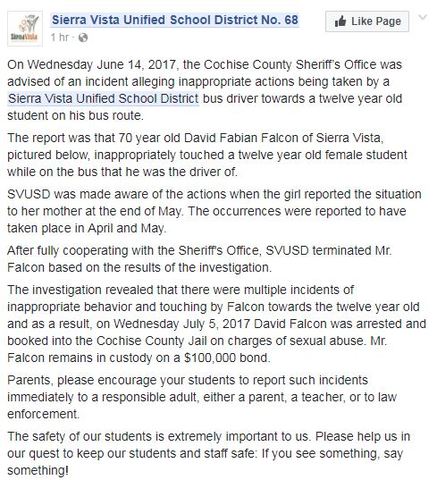