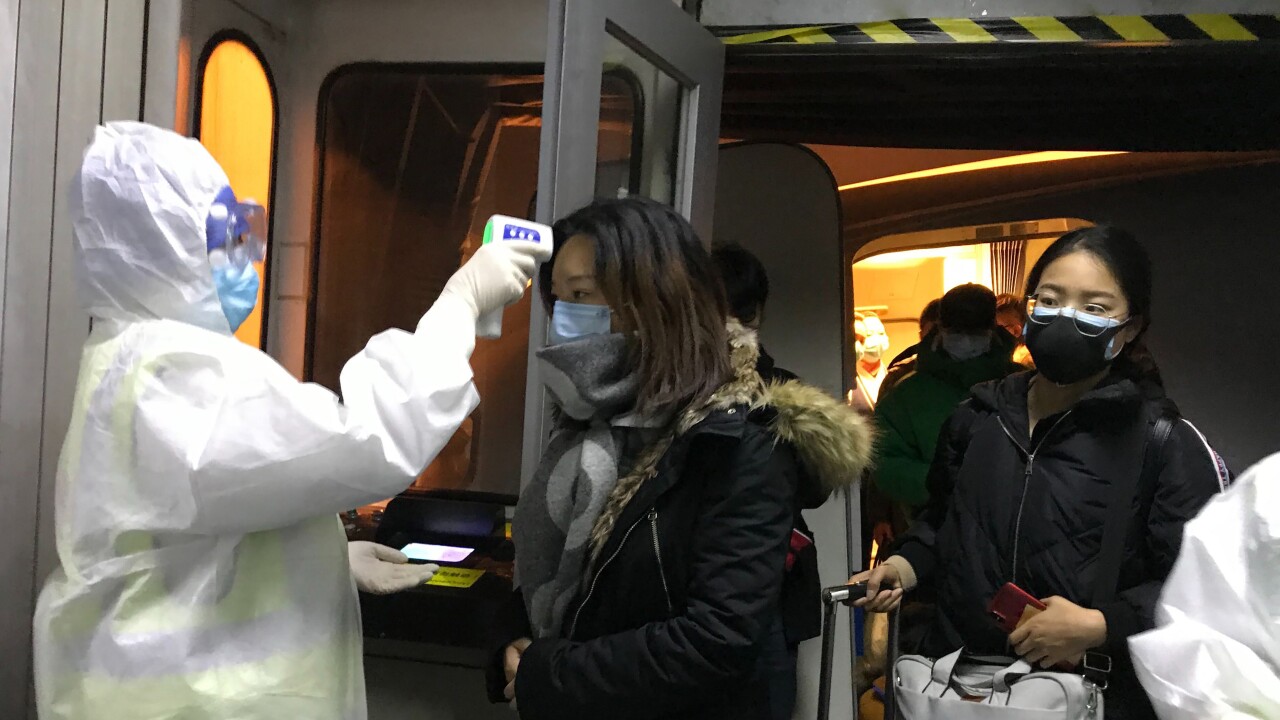 (Copyright 2020 The Associated Press. All rights reserved. This material may not be published, broadcast, rewritten or redistributed.)
Emily Wang/AP
Health Officials in hazmat suits check body temperatures of passengers arriving from the city of Wuhan Wednesday, Jan. 22, 2020, at the airport in Beijing, China. Nearly two decades after the disastrously-handled SARS epidemic, China’s more-open response to a new virus signals its growing confidence and a greater awareness of the pitfalls of censorship, even while the government is as authoritarian as ever. (AP Photo Emily Wang)

In response to the new coronavirus outbreak, a World Health Organization committee will meet Wednesday to decide whether to declare the virus a "public health emergency of international concern."

The new coronavirus that originated in Wuhan, China, continues to spread, with at least 440 people sickened in China and additional cases reported among travelers from countries outside of China, including a patient in the United States.

To earn that WHO designation, the outbreak would have to rise to the level of being "an extraordinary event" that endangers international public health, according to the WHO's procedural guidelines.

Should the WHO declare a public health emergency, "it would substantially impede travel in and out of China for both commercial and tourist reasons," Dr. William Schaffner, medical director of the National Foundation for Infectious Diseases, told ABC News.

"That would also suggest that other countries not accept tourists and visitors for whatever reason from China. It really inhibits a lot of commercial work," he said.

While the situation in China is fluid, Schaffner said he thinks it's somewhat unlikely that the WHO will declare it an emergency.

"At the moment, it is a local problem with a little bit of exportation to other countries, but not in a major way," he said.

So far, 17 people in the Hubei province of China, have died of the new coronavirus.

The WHO meeting comes as President Donald Trump met with world and business leaders at the World Economic Forum in Davos, Switzerland, this week.

"We have it totally under control," Trump said of first coronavirus case in the United States, in a patient from Washington state.

"It's one person coming in from China, and we have it under control. It's going to be just fine," the president said.

The patient is a man in his 30s who traveled to Wuhan, China, the city at the center of the current outbreak. He said that he did not visit the seafood and live animal market where the virus is thought to have originated from.

The patient is hospitalized and in good condition, according to health officials in Washington state and at the Centers for Disease Control and Prevention, who are conducting contact tracing to determine whether any individuals the patient came in contact with were exposed to the virus.