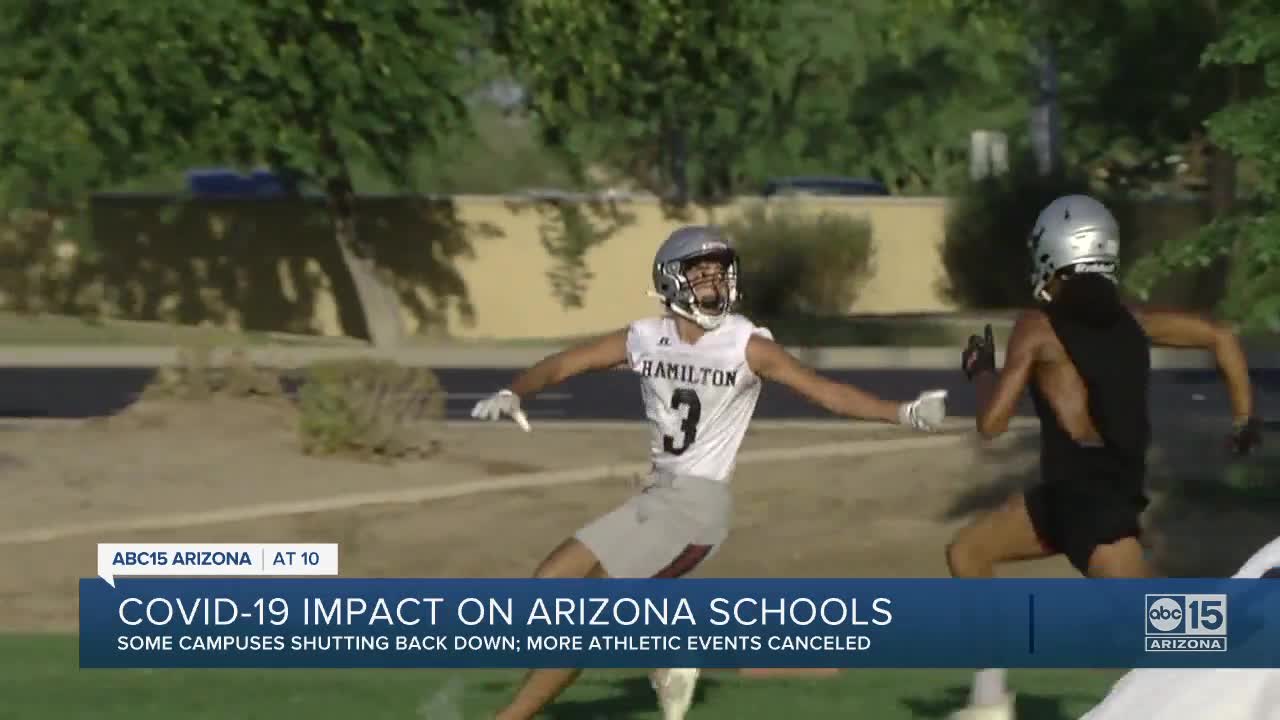 Some campuses are shutting back down and more athletic events are being canceled.

PHOENIX — Another Valley school district is returning to remote learning after an outbreak of COVID-19 on campus.

The Wilson School District announced Wednesday they identified an outbreak at Wilson Primary School. Since the district's schools are in close proximity to each other, school officials said they made the decision to return to virtual instruction for all Wilson students (both Primary and Elementary) and staff until November 9 (tentatively).

The district has approximately 1,075 students, and is located near 32nd and Fillmore streets in east Phoenix.

Schools in the district opened eight days ago on October 12.

A similar situation is played out in Queen Creek with Chandler Unified's Casteel High School. Students went back to class last week and already 102 are in quarantine, after five caught COVID.

JO Combs Unified School District sent a letter to parents October 15, saying they were informed of at least two people who had tested positive for the virus at JO Combs High School and were directed by public health officials to temporarily close the school beginning Thursday, October 15 until October 27 at the earliest.

Sources say some are athletes.

Already seven high school football teams have had to cancel games this week. One Valley team had five positives, including a coach, a manager, and three players, according to AIA Executive Director David Hines.

Hines said he spoke with school athletic directors Wednesday about the seriousness and unpredictability.

"We are in a tenuous situation. We can get shut down at any time" said Hines. "We are real hopeful...but I’m very concerned with things coming up, like Thanksgiving, where families could get together."

"I’m not saying it’s time to pull the plug on it, but at the same time you have to say, these high school teams do not have the same resources the NCAA has," said Will Humble, former Director of the Arizona Department of Health.

Humble believes the governor needs to mandate masks statewide and counties need to crack down on businesses disregarding safety guidelines.

"The policy decisions drive the human behavior. The human behavior drives the replication of the virus. The replication of the virus drives hospital admissions and deaths. So it’s a chain of events that starts with the initial policy decisions," said Humble, who is currently the Executive Director of AZ Public Health Association.

Other experts who closely following the data say in the next week or so the state dashboard will likely show serious spikes in certain school districts. Specifically in Queen Creek, Scottsdale Unified, and Gilbert.

"Queen Creek is really hot. It went from 14 cases a week when we first started watching it when they opened up. And now it’s at 140 cases per week. And at this point it’s gone vertical," said statistician Mike Norton, who is CEO of Athena Foundation Scottsdale.

Norton and a team of other have been dissecting the data dashboard and looking to pull out trends that can predict the direction and impact of the virus, something he says the county has the ability to do.

Norton, also critical of how counties are handling the data they have about infections.

"If we follow the lead that was given to us by other schools in other states, you have a very proactive county health department that is tracking and tracing, helping identify grade levels that need to be quarantined," he said. "Then you can keep schools open if you have enough data and that health department is active in shutting down the hotspots."

Norton said if the county health departments pinpointed cases it would give schools more flexibility and parents more peace of mind.

"Since we don’t know where the hotspots are... we are forced to just kind of go nuclear - either we leave the schools open or we shut them down, because we don’t know what grade levels, what classes, what groups of kids," he said.

A school outbreak of COVID-19 is defined as:

For more information on schools and those with known, reported coronavirus cases, visit our full section.