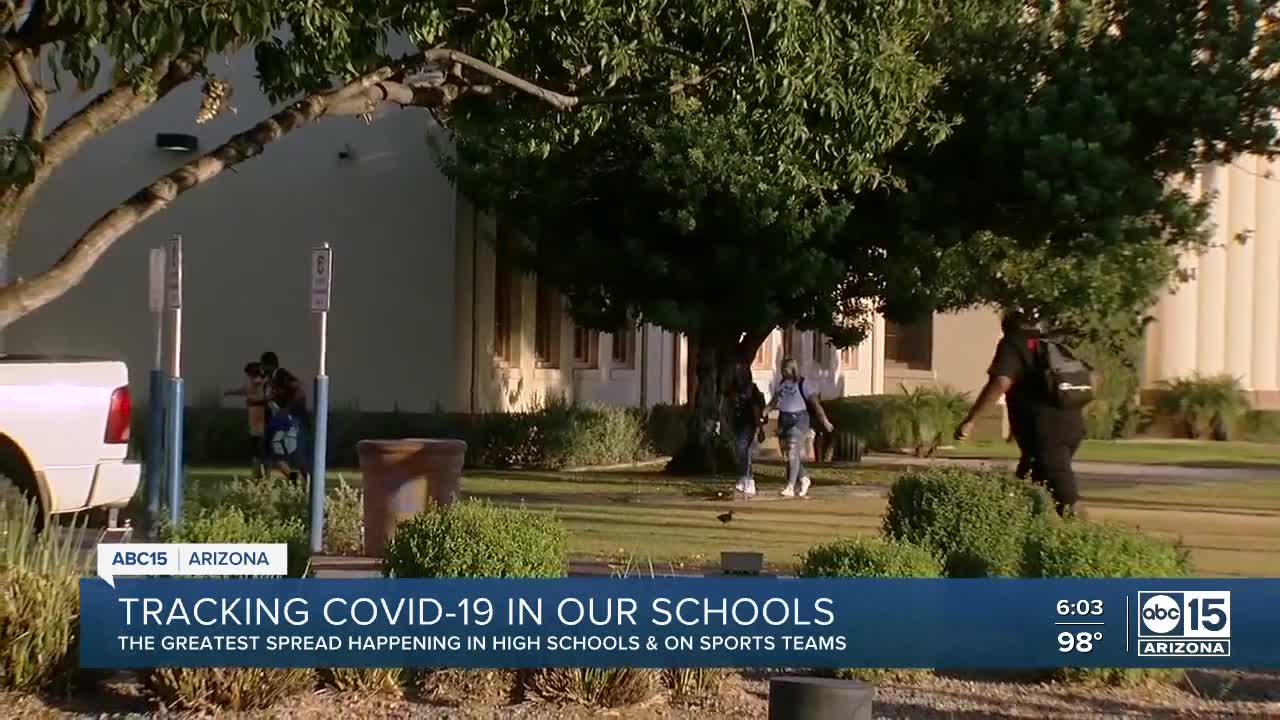 The greatest spread happening in high schools and on sports teams.

As more high school students return to the classroom, ABC15 is tracking a wave of new coronavirus cases reported in districts across the Valley.

FULL SECTION: Safely Back to School

Michael Norton is the executive director of the Athena Foundation Scottsdale. The non-profit think tank is tracking COVID activity within school district boundaries.

Those words of warning, given just one day before a handful of Valley high schools reported nearly a dozen new coronavirus cases.

Since the Maricopa County school dashboard has a 12-day lag, Norton and his team of volunteers compile and analyze daily zipcode data from the state and county websites.

Right now, they are tracking districts in Queen Creek, Cave Creek, Fountain Hills, Gilbert, Paradise Valley and Scottsdale. They hope to add more if, and when, resources allow.

"Right now there's evidence that Scottsdale Unified District has a problem again," Norton said. "The problem's in the northern half of the district, not the southern half."

Norton says as of Tuesday, the number of cases within the ten zip codes feeding Scottsdale Unified have more than doubled in the last seven days, now sitting at 294.

He says zip code 85255, which feeds five high schools including Chaparral, is the most concerning. It reported 60 cases in the past week, up from 19 cases the week before.

"It may not have anything to do with the schools. We don’t know that because we’re not getting that information from the county," said Norton. "There's a lot of anxious people, whether it’s parents, or teachers, staff, health officials."

Dr. Dave Engelthaler is the director of TGen North and a former state epidemiologist for Arizona.

"If you have cases in the community, that could cause the virus to come into the school and then potentially transmit within the school," he said. "We do see more cases, more virus moving around the older you get and that's true with children. Once you get into teenagers they typically will get more symptomatic and they'll be able to transmit easier than younger children."

Dr. Engelthaler says increased socialization through extracurricular activities and sports can also make high schoolers more susceptible. While more cases are expected as more districts reopen, a rapid spike in cases would be cause for concern.

"If we're seeing 5% rates in that community, we really shouldn't be seeing much more than that within the school," he said. "If it starts to get to 10%, 15%, 20% then yeah, that's a real indication that something's going wrong."