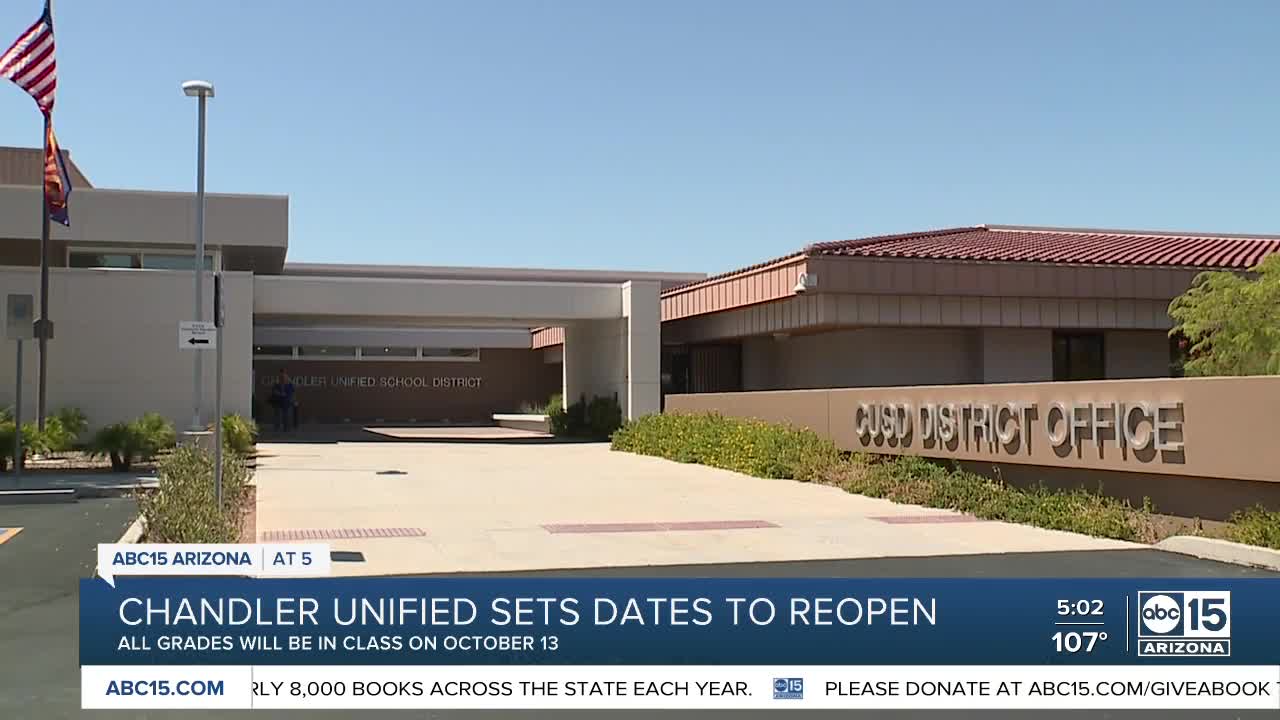 The Chandler Unified School District Governing Board voted 3-2 in favor of a plan that would have students return to school as early as Monday, September 14.

CHANDLER, AZ — One of Arizona's largest school districts has set dates for students to return to class for in-person learning.

The Chandler Unified School District Governing Board voted 3-2 in favor of a plan that would have students return to school as early as Monday, September 14.

The approved plan staggers the reentry of students in different grades into the schools:

"It was inconsiderate to our families who wanted that consistency and were asking us to honor our agreement to remain online for the first quarter and explore in-person options for the second quarter," said CUSD Board member Lindsay Love, explaining her "no" vote against the plan. "It's not that I don't trust our staff at Chandler. I just think we're biting off a bit more than we can chew."

The official start date of the district's second quarter is October 13.

"I was really conflicted. I didn't want to vote for students to go back quite yet," said Board Member Dave Evans, who voted "yes" for the plan. "I talked to a bunch of our principals, especially at our title one schools. "Every single one of those principals said our kids are falling further and further behind."

Students can still elect to remain online through the Chandler Online Academy.

Parents who elect to send a student back to school will have to sign a disclosure agreement acknowledging the known health risks and agreeing to abide by health guidelines. Part of the agreement states that parents are not allowed inside the school, only going as far as the pick-up/drop-off zones.

CUSD released this statement regarding the transition to in-person education:

"The health pandemic is a complex issue. In recent weeks, there have been two noteworthy changes in the data that led the Governing Board to revisit in-person instruction. First, the number of cases in Arizona and the City of Chandler have significantly decreased over the last several weeks. Secondly, the Maricopa County Health Department benchmarks for Chandler Unified School District have steadily improved. The reopening plan approved by the Governing Board is contingent upon the benchmarks remaining stable or improving. Safety and mitigation practices will be a priority including, but not limited to, the requirement for staff and students to wear face coverings when on campus. Schools will be providing further information over the next week.

We look forward to greeting our elementary students in person in the next few weeks joined by our secondary students as well as the Chandler Online Academy students who choose to move to in-person learning on October 13th."

Along with a definitive plan for bringing students back to the classroom, CUSD has announced there will be an online dashboard where the district will be publicly reporting its own COVID-19 data. The specifications of that database have not yet been released, and a spokesperson from CUSD said it would be ready by the September 14 start date for grades preschool through second grade.