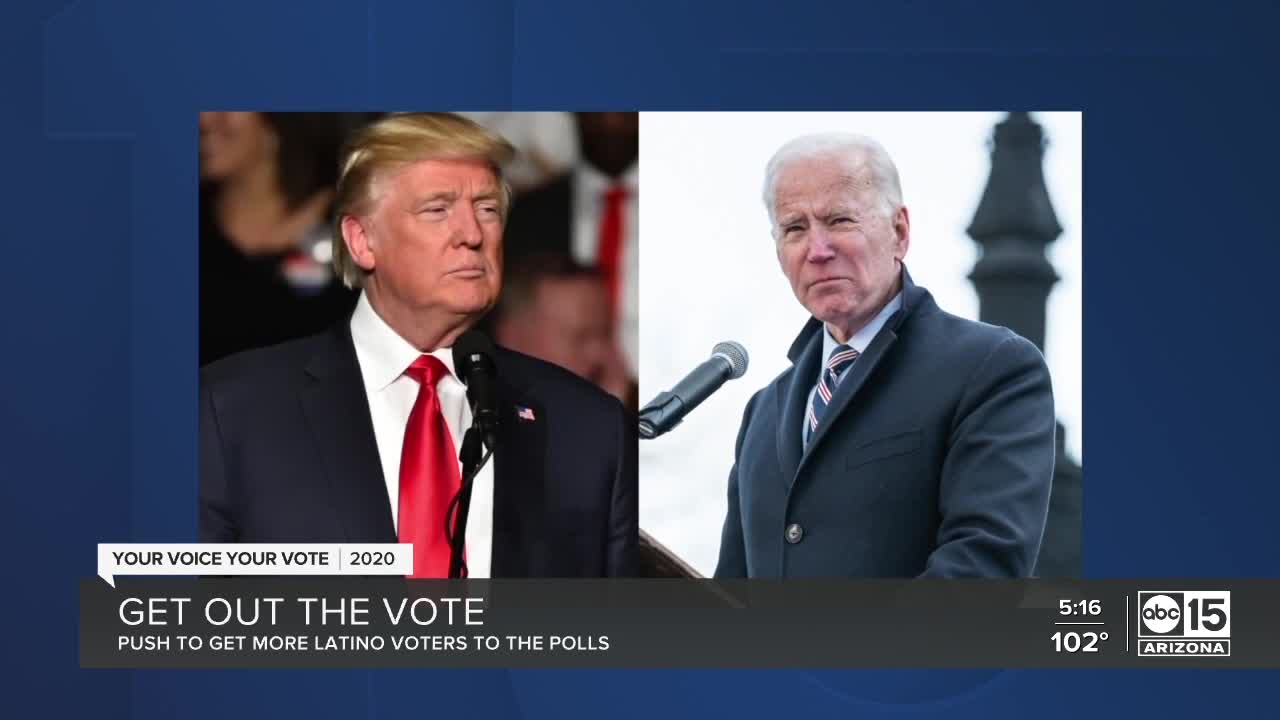 valley groups are pushing to get more Latino voters to the polls after the registration deadline was pushed back.

PHOENIX — Arizonans now have until Oct. 23, 2020 to register to vote. A time frame that cannot go to waste for organizations like Chicanos Por La Causa and Unidos U.S. Action Fund.

“We have about a million people in Arizona that are Latino and half of them voted in 2016. Can you imagine if we can get 200,000 more people to vote?” said David Adame, President and CEO of CPLC.

CPLC launched the Get Out the Vote campaign together with Unidos U.S. Action Fund to try to boost the Latino turnout this election.

They plan to have six live stream sessions on YouTube this month and will also feature digital advertising in English and Spanish.

“It's about empowering our community, and we need to get the vote out,” expressed Adame.

Adame says they do realize that COVID-19 has brought some challenges, but it won’t stop them from their mission.

“It’s time, it’s our time. Just to give you an example of what the future looks like, 62 percent of all kindergarten kids in Arizona are Latino. Fast forward to 13 years, we’re going to be the majority here. So, we need to prepare ourselves because we’re the future.”

According to the Pew Research Center, Arizona has about a million eligible Latino voters.

Marisela Flores is one of them.

“I feel so happy. I've waited anxiously for this date to be able to vote on this election. It’s so important because it’s a presidential election.”

Flores is originally from Guaymas, Sonora, Mexico. She says she migrated to the U.S. in 1985 and became a U.S. Citizen in 2018.

I asked Flores about the saying that Latinos don’t vote, “that’s in the past. Now there’s a huge and powerful wave of Latinos willing to vote because they know they have that power; they have that right and they’re ready to vote.”

Meanwhile, Adame says it’s about time to show that Latinos got the numbers.

“The last thing I want to hear again is another ex-governor saying, ‘don’t worry about them, they don’t vote.’ We do matter and we’re going to make an impact in this election. My deal is if we can get our community to at least 70% participation in the population they won't stop us, and we will control our destiny.”

He says all they need is for both candidates to stop ignoring them and start addressing the issues that matter the most to this community.

“We’re 18% of this country, yet we’re 36% of the essential workers. We are critical to this country. You need to pay attention to us and make sure our voices and needs are being met.”

To learn more about the Get Out the Vote campaign visit: https://www.cplc.org/vote.php