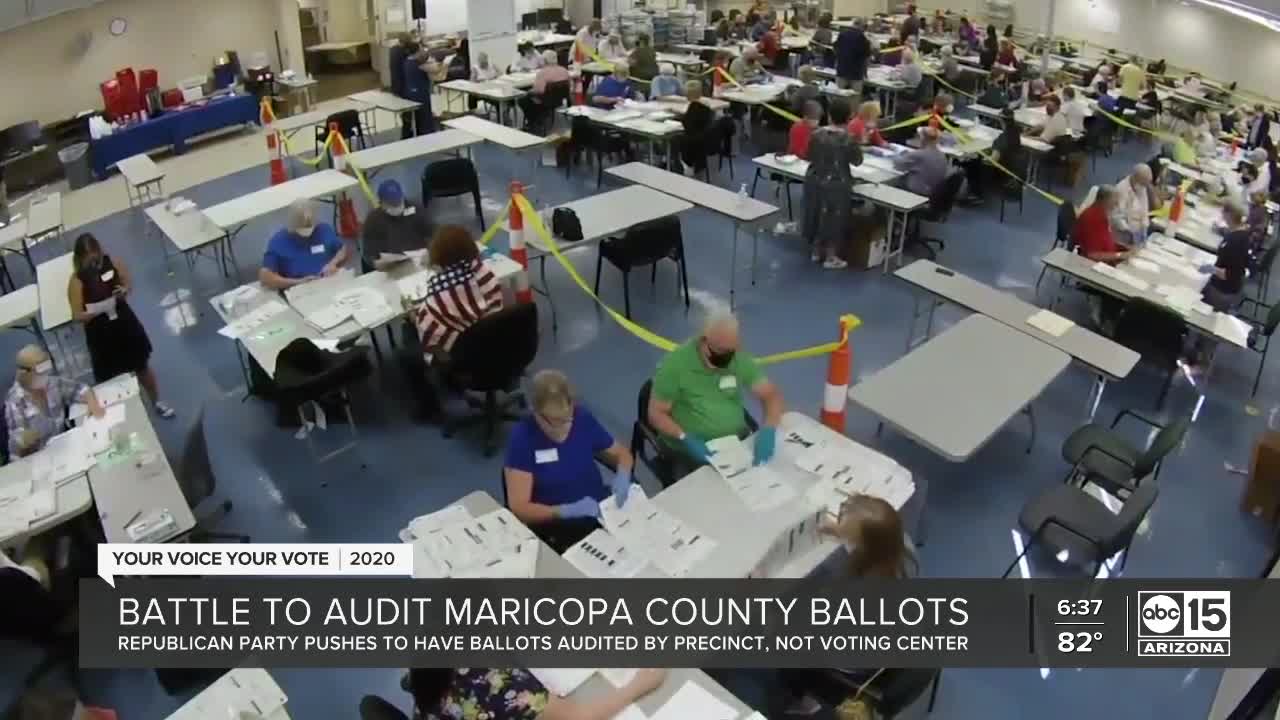 The Republican Party is pushing to have ballots audited by precinct, not voting center.

Of three lawsuits filed since Election Day, only two remain.

The original "SharpieGate" challenge was initially dismissed, but now lawyers for at least three plaintiffs who allege problems after the felt-tip pen ink bled through their ballot have re-filed the case.

The second is a challenge to Maricopa County's hand count audit process.

This was the first year Maricopa County implemented a "vote center" model for a general election. The system gives voters more access and ease to voting, allowing voters to vote in person at any vote center, rather than having to report to locations in their assigned precinct.

The ease also allows for a different system when auditing votes after Election day. Officials sort ballots by vote center, rather than precinct to conduct an audit.

While it's a first for Maricopa County, other Arizona counties have been doing the same for nearly a decade.

"Really, you’re getting more ballot styles to count by doing it by vote center," said Lynn Constabile, the Elections Director for Yavapai County. "You’re getting a whole bunch of precincts to count and to check that count against the machine.”

Yavapai County shifted to the vote center model in 2012, and worked with the Secretary of State's office to implement procedures within the state's Elections Procedure Manual to ensure audits still fell within state statute.

"The law doesn’t always specify every little nuance of administration," added Constabile." So, that’s where the Secretary of State's procedures manual comes in, it’s supposed to fill the gap. You know, if the law doesn’t specify do it this way, in order for us to be uniform across Arizona, we work on that procedures manual with the Secretary of State and that’s why it’s there.”

Hand count audits aren't mandatory, but they are a helpful process that checks that tabulation machines used to count ballots were accurate. Political parties conduct the physical hand count audit. Each party assigns a number of representatives to randomly pick either 2% or at least two vote centers or precinct, whichever is greater, to compare a manual count of ballots done by volunteers to the count completed by tabulation machines.

Maricopa County reported a 100% match after auditing four vote centers during their audit process, completed by an equal number of Republican, Democrat and Libertarian groups.

Still, Arizona Republicans argue the process should be re-done, and ballots sorted by precinct, rather than vote center, despite the county switching to the model.

"I got to tell you hand-counting takes time," said Constabile." [In Yavapai County], even when we did 2% it took nine hours for my boards to count all of those. They started at 10 o’clock in the morning and we didn’t finish until 7 o’clock at night."

Attorneys for Maricopa County worry a ruling in favor of the GOP could cost more taxpayer money, and risk putting the county behind on its timeline to report results to the Secretary of State's office.

Maricopa County plans to complete their final canvass of results by this week, according to election administrators, just a few days before the set deadline of November 23. Conducting a second hand-count audit, and re-organizing ballots less than a week from the deadline could delay their reporting.

"Machines are much more accurate than people are. People make a lot of mistakes, and they get tired, and you know if there’s a lot that goes into it," added Constabile.

Arizona's deadline to report results before electors vote in December is on November 30.

A judge is set to hear arguments in this case Wednesday.