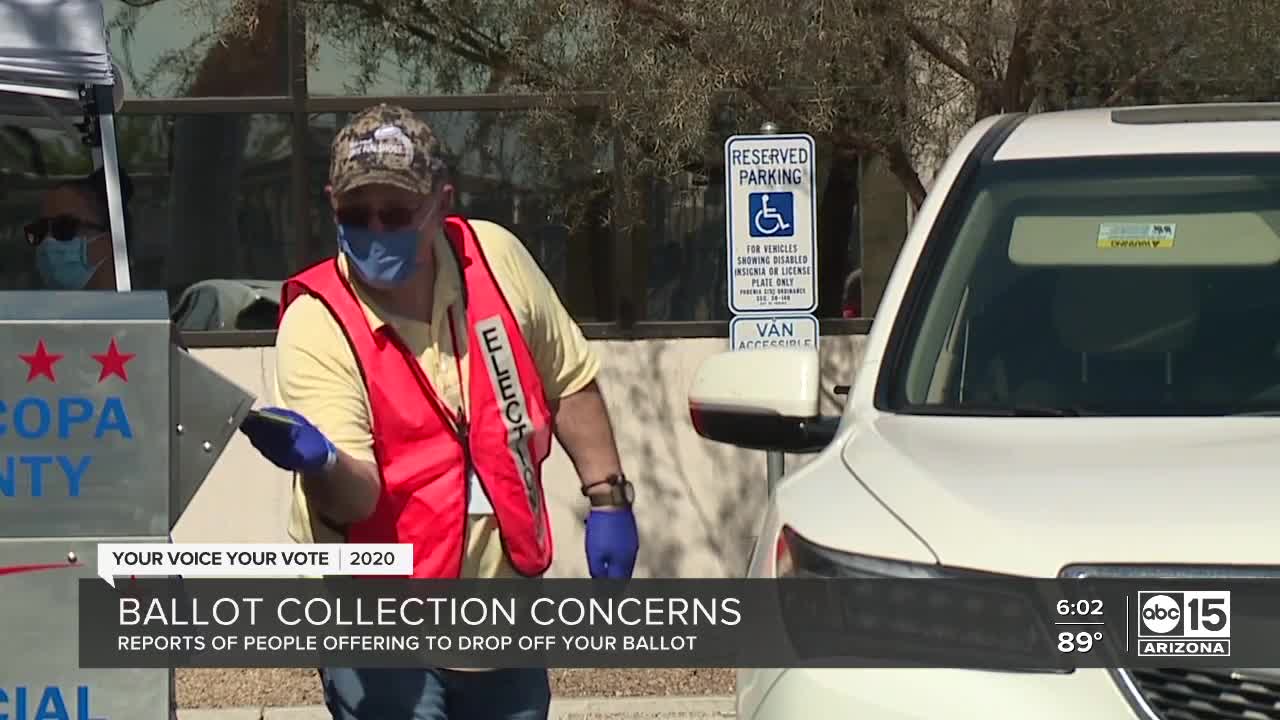 There have been reports of people offering to drop off you ballot.

It's why she was caught off guard Thursday when a woman showed up at her doorstep, asking to do it for her.

"She’s like well, I just wanted to make sure she voted, and if not I’d like to take her ballot and take it in for her," Rudin explained. "I would never trust anyone with my ballot anyways, so I kind of just wrote my, blew it off initially, and then I kind of thought about it more and thought well that’s actually like not a good situation.“

Rudin says the woman didn't identify herself or say whether she was working for any organization or political party, but asked what party Rudin was registered to, and who she voted for.

"Who knows what she’s doing with the ballot, if she’s throwing out a certain side or I don’t know," she added.

Rudin says she didn't report the incident to the Mesa Police Department but found out someone else reported an identical experience in Chandler.

"There was a female that came to her door asking her about party affiliation and then offered to take her ballot for her to drop it off," said Sergeant Jason McClimans, a spokesperson for the Chandler Police Department, who's now investigating. "We would like to talk to this individual to see exactly what ideas or what she was thinking and see what her intent was."

Chandler Police says this incident happened Wednesday around 6 p.m. near the north west corner of McQueen and Ray Road. The unknown woman eventually left empty-handed in a black SUV. Sgt. McClimans says the Arizona Attorney General and Secretary of State's office are now involved as well.

That woman filed a police report with the agency and sent them a photo she caught of the woman on surveillance video outside her home. She posted the same photo on social media.

"I showed the picture to my husband, and I said like this is the woman that was at our door? And he said yeah, that’s her," added Rudin.

"The arguments for the bill were that they could collect your ballot have mal-intent and not really intend to drop it off at all, but use that opportunity to commit some sort of voter fraud," said Secretary of State Katie Hobbs. "Now, I will say that there was not evidence of this happening.”

Hobbs still warns voters to be cautious, asking they only trust their ballot to a family member, household member or caretaker if they're unable to return their early ballot themselves.

"I would hate for somebody to think that somebody was well-meaning, and then their ballot didn’t get in and their vote wouldn’t be able to count," she added.

State election officials say they recommend voters get their ballots in the mail by October 27 in order to ensure it's at your county's elections department by the deadline, 7 p.m. on election night.

Otherwise, they recommend you drop it off at a vote center or dropbox anywhere in the Valley.