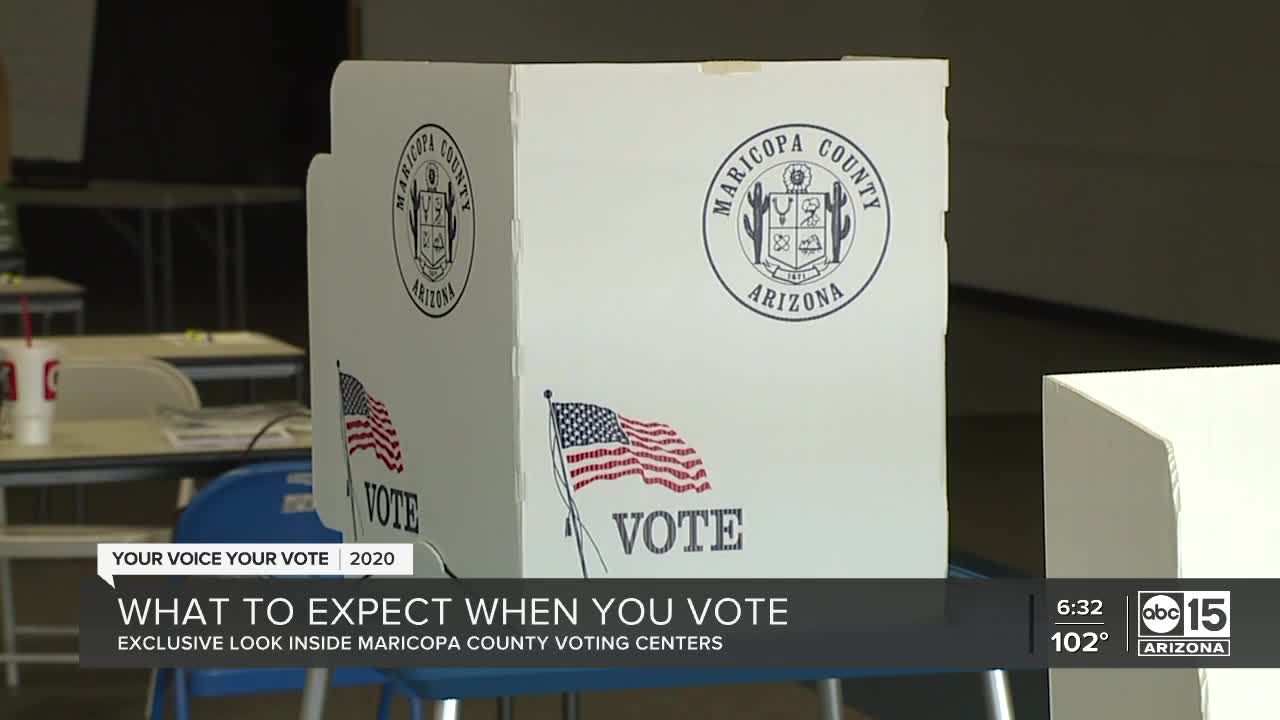 Whether you plan to vote early, or on election day, you can do both in-person.

While the overall number of locations is fewer than previous general elections, election officials say it's intended to help voters rather than create problems at the polls.

In 2016, Maricopa County opened 500 polling locations. Voters were told to report to their assigned location, nearest to their listed address on their voter registration card.

Due to COVID-19, election officials said they needed to look for larger venues, that would better accommodate safety protocols.

"Notice that the voting booths behind me are each six-feet apart," said Kelly Dixon, Assistant Director of Recruitment and Training for the Maricopa County Elections Department. "Our site books are six-feet apart. When this location is open there's actually going to be marks on the floor indicating places were folks might queue in line."

Dixon says poll workers will be sanitizing privacy voting booths every 30 minutes and offering voters masks and gloves at the door.

Despite Maricopa county's standing mask mandate, voters can't be turned away for not wearing protective face coverings, according to federal law.

Voters will be checked in upon arrival at one of 10 to 15 stations, equipped with site-books or tablets that allows voters to scan the barcode on their driver's license, voter ID card, or similar forms of identification.

They then verify their voter information, including name, date-of-birth, and address is correct. They'll have to ask a poll worker to confirm their proof identification.

Once that happens, each voter's ballot will be printed on-site.

If you're voting early, you'll also receive a voter affidavit, an envelope you're required to write your phone number on, and sign. Once you complete your early ballot, you'll place it into the envelope, and drop in a secure drop box on-site.

If you're voting on election day, your ballot will be deposited directly into a tabulator, also found on-site.

If you received a ballot-by-mail, but would rather bypass USPS when returning it, Maricopa County offers several options for voters that provide contactless, secure delivery to the elections department.

Voters can slip their ballots into any dropbox across the county, including ones inside vote centers, without having to make a line.

This year, election officials say they've partnered with several sports teams across the valley to offer a drive-thru drop off option for voters. This way, voters can return their ballot without getting out of the car.

To find where the nearest vote center or dropbox is to you, you can find a full list of locations on abc15.com/elections. Once polls are open, voters are encouraged to visit locations.maricopa.vote for a site map and wait times, updated every 15 minutes.