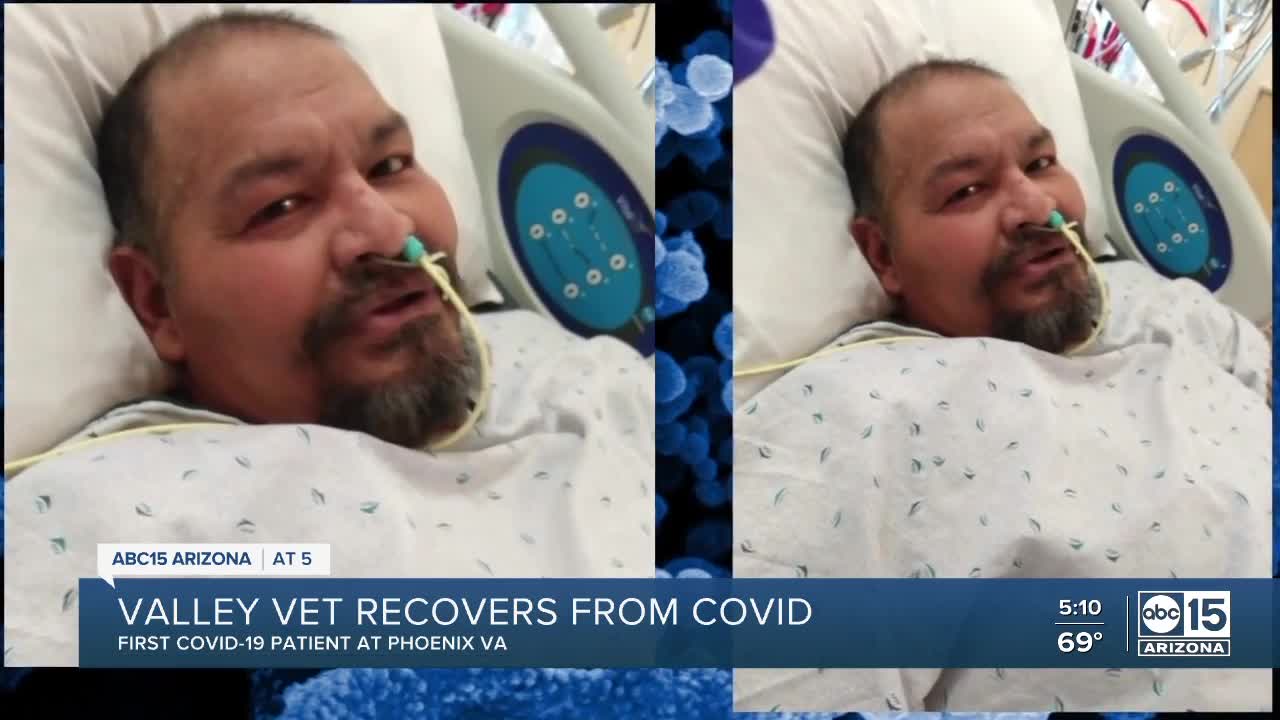 PHOENIX — A Valley veteran is speaking out about his near-death experience, after a long battle with COVID-19. Armando Contreras was on a ventilator for 33 days after his wife rushed him to the Phoenix VA Healthcare System's emergency room with a fever of 101 degrees.

"I'll tell people you know this ain't a joke, you're not just going to get over it," said Contreras, who has a new-found appreciation for life.

Contreras was the first COVID-19 patient in the VA Healthcare System in early March, at a time with the pandemic was still new to the Valley.

"I was feeling kind of tired and weak. I thought it was normal you know, having had a Kidney transplant about six-months earlier," said Contreras. However, his wife Ruthie Contreras noticed something was off.

"His skin color also was grey. His breathing was also labored so I knew we had to get him into the emergency room right away," said Ruthie.

By the time they got to the Phoenix VA, Contreras said she could barely carry her husband out of their vehicle. His entire body was leaning to one side. She had to get a wheelchair to get him to the emergency room. Once there, staff had her fill out paperwork to get him registered, then she was told to wait outside, because the hospitals had already shut their doors to outside visitors, because of COVID-19.

"I don't remember once I got into those emergency room doors, where I went or what was happening to me or anything. I was out of it," said Armando Contreras.

His wife, Ruthie sat in her car in the parking lot for hours, just waiting to get some word of when she could see hold her husband again. It turned out to be 33 days later.

Ruthie Contreras said for those 33 days she begged hospital staff to let her in to see her husband. She even tried to sneak into the Intensive Care Unit at one point. Friends in the Army tried desperately to plead with Governor Doug Ducey to intervene and allow Ruthie to see her husband.

"Honestly, I was scared. I was really scared and I didn't know what was going to happen," said Ruthie Contreras.

Inside the Phoenix VA, a team of doctors and nurses were working hard trying to figure out what was wrong with Contreras. Ruthie says at first, she was told her husband had Pneumonia.

Dr. Felipe Guttierez, the Chief of Infectious Diseases at the Phoenix VA said they had already preparing to see their first COVID-19 patients in Phoenix.

"We had been tracking this new virus novel virus that we hadn't seen yet, we had been aware of it since late 2019 and we began to prepare in such a way that we wanted to be ready when it got here," said Guttierez.

"It was a learning curve for all of us," he added.

Dr. Justin Seroy, an Infectious Diseases Physician at the Phoenix VA said they suspected Contreras may have COVID-19 right away.

"That was like our biggest suspicion, but we just couldn't get the test to confirm it for a few days. The tests were not fast enough back then," said Seroy.

Ruthie Contreras said she was told doctors were consulting their colleagues in Italy and China to learn more about treating COVID-19, as they fought to save her husband's life. At one point, the prognosis was very grim.

"His doctors were being pretty honest with me. They were telling me that things didn't look good and to prepare myself, to get my family ready," said Contreras.

The Phoenix VA finally allowed her to have a compassion visit with her husband, thinking it may be the last time she could say goodbye to him.

"They put me in a HAZMAT suit, with the mask and gloves and let me see him for 30 minutes through the ICU glass," said Contreras.

When asked what she said to him through that glass, she says she prayed very loudly, hoping he could hear her and know that he was not alone.

"I didn't want him to think he was all by himself there," said Contreras.

Her prayers were answered when her husband's medical condition turned around. He was finally able to get off the ventilator, but if you ask Armando Contreras, he says he does not remember any of it.

"To me it felt like I was just there for 2-3 days but it ended up being 33 days. So a whole month of my life and I don't remember what happened," said Contreras.

On this Veterans Day, Contreras said he felt lucky to be alive.

"Knowing that I could have died, and knowing how many people have already died I'm blessed. I'm lucky to still be here," said Contreras. The experience has also given him a new appreciation for his wife, whom he described as quiet and shy.

"I never knew that she had it in her. It really opened my eyes to how lucky I am to have her in my life," he added.