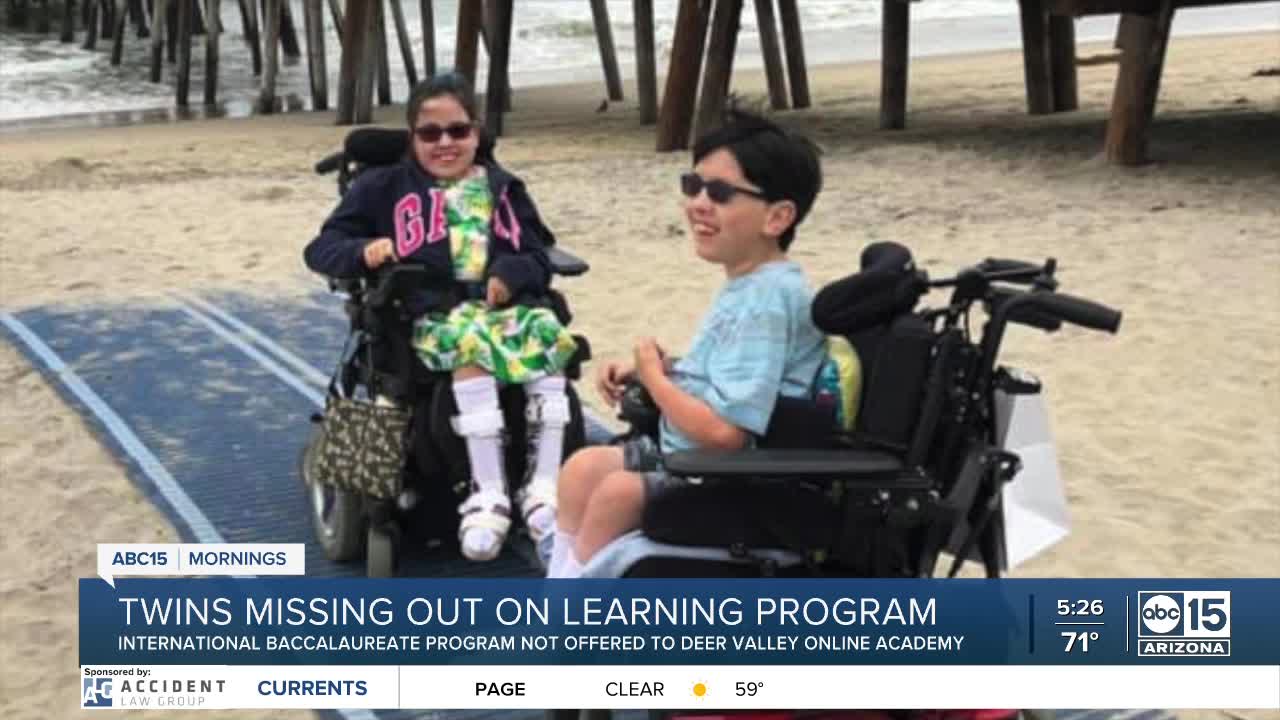 A Valley mother says a program her children are part of is not available remotely, causing problems for her children with compromised immune systems.

Lauren and Kyle Byrd turned 13 years old in June. The set of twins born with a form of muscular dystrophy called Spinal Muscular Atrophy are not able to go back to in-person school due to their compromised immune systems.

"Their bodies are so weak and therefore their respiratory system is weak. The sniffles with them turns into a week home from school," says Cassandra Byrd, mother of the twins.

Byrd reached out to ABC15 trying to get the Deer Valley Unified School District to listen to her quest for help. Her twins are part of the International Baccalaureate program at Norterra Canyon Elementary School. Byrd has decided to keep her children home through the COVID-19 pandemic but that also means they aren't able to continue their curriculum in the IB program.

"It feels lazy on their part, and discriminatory for sure," added Byrd. "The IB program is an elite program that not all schools have, (and) we would really like for them to stay in that program."

According to the DVUSD spokesperson Monica Allread, "When a parent chooses DVOA (Deer Valley Online Academy) there are some programs that cannot be offered in the online school. In some cases, this is because of staffing and in other cases it is due to accreditation. The DVOA is not an IBMYP authorized school. The DVOA has not gone through the rigorous process to be considered an IBMYP school."

Cassandra says she has reached out to the IB program and a representative has told her they would be willing to work with the school so her children and others who are in the same situation are able to remain at home and enrolled in IB program curriculum. Cassandra says the effort from administrators is simply not there.

"Because adults won't take the time to figure it out and do the right thing, then the kids suffer," says Byrd.

Kyle and Lauren are now enrolled in a general education classroom through Deer Valley Online Academy. Their mother says they are not being challenged in the one area where they can succeed.

"School is one of the lifelines that they have and their brains are their strongest, only working, muscle, I gotta keep it in good condition," she says.